Monica Perales's book Smeltertown: Making and Remembering a Southwest Border Community (UNC Press 2010) was named as a finalist for the 2010 William P. Clements Prize for the Best Non-Fiction Book on Southwestern America. More »

Nancy Cain Marcus spoke about the tragic and the comic in Shakespeare’s plays at the one-day teacher workshop "Teaching Shakespeare" at the Byrne-Reed House. More »

Adair Margo, director of the Tom Lea Institute and a former board member, delivered a talk at the Byrne-Reed House entitled “Tom Lea, Genius of the Twentieth Century.” More »

Humanities Texas welcomed new additions to the board and bid grateful farewells to outgoing board members. More »

The Humanities Texas board held its first meeting in the restored Byrne-Reed House on October 30, 2010.

Monica Perales published Smeltertown: Making and Remembering a Southwest Border Community, which tells the story of the once-thriving town at the base of the ASARCO smelter in El Paso.

On April 17, 2010, past board chair Joseph R. Krier received the Distinguished Alumni Award from The University of Texas Friar Society.

Former board member Light T. Cummins received the Liz Carpenter Award for Research in the History of Women at the annual meeting of the Texas State Historical Association (TSHA) in Dallas on March 5, 2010. The award is presented annually for the best scholarly book on the history of women and Texas that is published during the previous calendar year. Cummins was recognized for Emily Austin of Texas, 1795-1851, published by Texas Christian University Press. The Gainesville Daily Register wrote an article on the award. More »

In our February e-newsletter, we spotlighted Boy of the Border, a previously unpublished children's book by Langston Hughes and Arna Bontemps. The book was published in December by Sweet Earth Flying Press, which was established by Dr. Maceo C. Dailey Jr. and his wife, Sondra.

Dr. Juliet V. García, president of The University of Texas at Brownsville, was named one of Time magazine's ten best college presidents on November 11, 2009. The magazine profiles Dr. García. More »

Venus F. Strawn, an Austin civic leader, was appointed by Governor Rick Perry to the Humanities Texas Board of Directors. The Governor's office issued a press release on the appointment. More »

On Thursday, May 28, 2009, former board member Ellen C. Temple was named Ralph W. Steen Memorial East Texan of the Year during the annual Deep East Texas Council of Governments meeting in Lufkin. The award recognizes Temple’s longtime dedication to philanthropy and community work in the Angelina County area.

On Saturday, May 23, 2009, former board member Betty Sue Flowers gave the commencement speech at The University of Texas at Austin’s Plan II graduation ceremony, marking a significant moment not only for the 150 seniors but also for herself. After forty-five years in Austin, Flowers left her post as director of the Lyndon B. Johnson Library and Museum and began a new chapter of her life in New York City. She served on the Humanities Texas board from 1983–1988. The Austin American-Statesman’s May 31, 2009, article detailed Flowers's past and future. More »

On April 16, 2009, the College of Liberal Arts at The University of Texas at Austin honored Leslie D. Blanton with the Pro Bene Meritis Award at a special dinner. Recipients have shown outstanding dedication to the liberal arts.

In mid-April, Albert S. Broussard received the Cornerstone Faculty Fellowship in Liberal Arts from his home institution, Texas A&M University. Recipients are recognized for their scholarly achievements, outstanding classroom teaching, contributions to undergraduate and graduate programs, and service to the university.

On October 17, 2008, Dr. Ricardo Romo received the Distinguished Alumni Award from The University of Texas at Austin.

El Paso native Adair Margo received the Order of the Aztec Eagle, Mexico’s highest award for non-citizens. Arturo Sarukhan, Mexico’s ambassador to the United States, presented the award during a ceremony at the Mexican Cultural Institute in Washington, D.C. The Houston Chronicle covered the story. More »

Bill Livingston, who retired in August after 58 years of service at The University of Texas at Austin, was featured in a front-page story in the Austin American-Statesman on November 19, 2007, and a feature article in UT's Alcalde magazine. More »

Dr. Juliet V. García, president of The University of Texas at Brownsville, was named one of six distinguished alumni of The University of Texas at Austin for 2007. A native of Brownsville, she earned a doctoral degree from UT’s College of Communication and was the first Hispanic woman to lead a college or university in the United States. The Alcalde profiled Dr. García. More »

We invite you to subscribe to Humanities, the Humanities Texas
e-newsletter, which provides monthly information about programs and opportunities.

Humanities Texas respects the privacy of its audiences and will at no time sell or distribute your personal information.

To subscribe, simply enter your email address in the box below and click "go." The next screen will prompt you for some brief additional information. 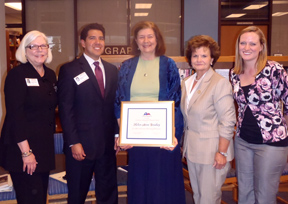 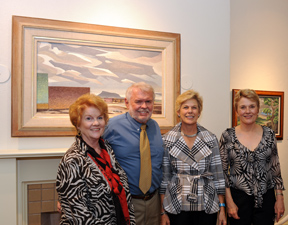 From left to right: Ann and Bill Kiely, Pam Willeford, and Adair Margo. The painting in the upper left corner is Tom Lea's A Quiet Place (1961), on loan from the Kielys’ private collection. 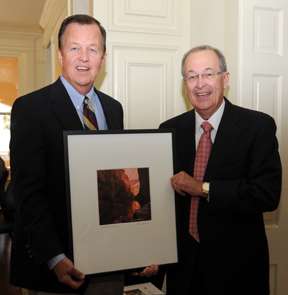 Julius Glickman (right) presents Joseph R. Krier with a Bill Wright photograph to thank him for his service on the Humanities Texas board. From left to right: Julius Glickman, Ellen C. Temple, Randy L. Diehl, and Frances B. Vick. Temple was the recipient of the Pro Bene Meritis award from The University of Texas at Austin's College of Liberal Arts. 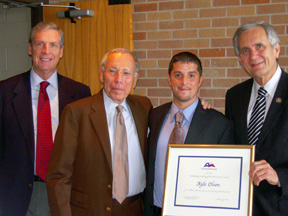