Crossroads of Empire: Early Printed Maps of the American Southwest

The Map Maker at Work, from Nova Reperta (New Discoveries), 1580. Courtesy of The University of Texas at Austin General Libraries.

The Southwest remained a land of mystery long after the rest of the continental United States had been surveyed and recorded on maps. Crossroads of Empire: Early Printed Maps of the American Southwest details the fascinating story of the discovery, exploration, and settlement of the area. This exhibition conveys the romance of maps, the legacy of mapmaking, and the profound influence of early mapmakers on our world today.

Crossroads of Empire: Early Printed Maps of the American Southwest features fourteen panels spanning the mapmaking enterprise from 1512 to 1873. It begins with the earliest known map to show the Texas edge of the Gulf and ends with an 1873 map of Texas showing the right-of-way granted to railroads. Panel topics include:

Crossroads of Empire is an exhibition organized by the Amon Carter Museum and The University of Texas at Arlington Library, and produced by Humanities Texas, the state affiliate of the National Endowment for the Humanities.

*Rental fees are based primarily on the cost of shipping. Prices may vary based on current fuel surcharges or venue location within the state of Texas. Out-of-state rentals are priced on an individual basis. Please call for a rental fee quote specific to your venue.

A specified number of print materials are provided with this exhibition at no additional cost. Additional copies of these materials may be obtained for a nominal fee:

Optional Caption: Published in 1656 by the first Royal Geographer of France, this map places a ring of mountains around French claims and depicts California as an island.  It is one of many fascinating maps featured in "Crossroads of Empire: Printed Maps of the American Southwest", an exhibition from Humanities Texas, the state affiliate of the National Endowment for the Humanities.  It can be seen at     Location/dates/time   .

Venues may request a CD with the Humanities Texas logo in a number of electronic file formats for use when developing print and online promotional materials. Logo files are also available for download on the logo page.

Book Now or Receive a Quote

To book an exhibition or receive a quote, please complete the online rental form.

All dates available. Contact us to reserve this exhibition for the upcoming year. 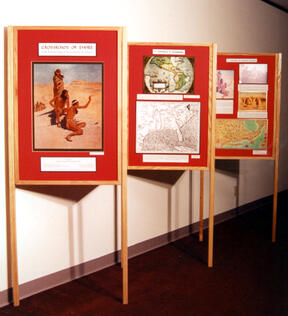 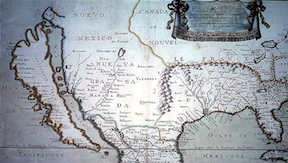