Eighty-two Texas teachers postponed their summer projects and vacations to spend four additional days in class this month. They joined twenty-seven scholars at the University of North Texas in Denton and Trinity University in San Antonio for "From Disunion to Empire: The United States, 1850–1900," Humanities Texas's fifth annual summer institutes for teachers. This year's program explored the tumultuous half century in which the nation experienced sectional rupture over slavery, the Civil War and Reconstruction, westward expansion, the industrialization and urbanization of the Gilded Age, and the Spanish-American War. A grant from the National Endowment for the Humanities We the People initiative made "From Disunion to Empire" possible.

The teachers, who came from twenty-eight of the state's thirty-two congressional districts, reflected the state's diverse regions and communities. Nancy Cooper, a sixth-generation Texan, teaches seven different subjects at a rural school in Veribest. Native Houstonian Sammy Johnson finds creative ways to reach at-risk students at the inner-city Houston Heights High School. Cynthia Humphries, one of four recipients of Humanities Texas' Outstanding Teaching Awards attending the institutes, works with gifted and talented students at El Paso's Ross Middle School. Edelia Lira, a twenty-nine-year veteran, teaches AP and regular U.S. history at Sidney Lanier High School on San Antonio's west side, while Heidi Murphey teaches middle schoolers in rural Hudson near Lufkin. Despite their different classrooms, all of the teachers demonstrated an extraordinary interest in the institutes' topic and a passion for their profession. As Mrs. Cooper noted, "Teachers enjoy learning as much as teaching."

The faculty for this year's institutes also came from a variety of campuses. Joining the host institutions' historians were scholars from The University of Texas at Austin, the University of Massachusetts at Amherst, the University of Illinois, the University of Arkansas at Little Rock, Texas Christian University, the University of Kentucky, and Texas A&M University. Also on the program were representatives of the National Archives and Records Administration, the Amon Carter Museum, and the Institute of Texas Cultures. The presentations of three prominent historians—H. W. Brands, Orville Vernon Burton, and Heather Cox Richardson—were open to the public.

Complementing the morning lectures were afternoon workshops in which small groups of teachers worked with individual scholars to develop effective strategies for enriching the curriculum. These popular sessions, which focused on primary source documents, provided opportunities for the historians and teachers to work collaboratively. Among the documents examined were an 1848 map of the United States depicting the then-undefined western territories, Sam Houston's 1860 address at a Union Mass Meeting in Austin, photographs of the Philadelphia Centennial Exposition of 1876, and Mary Church Terrell's 1898 address to the National American Women's Suffrage Association. "I loved working one-on-one with the professors during the workshop," declared Cynthia Wareham of Los Fresnos High School. Another educator characterized the workshops as "a wealth of valuable information on primary sources." The teachers received copies of significant historical documents and images selected for their effectiveness as teaching tools.

Both the Denton and San Antonio institutes featured special activities at the end of the afternoon workshops. Showcasing UNT's outstanding music department was a marvelous jazz performance with historical explanations by Ron Fink and the Bourbon Street Stompers. Trinity University welcomed the teachers with a fiesta of Mexican food and mariachi music.

Sharing these stimulating days with outstanding classroom teachers is always an inspiring experience for the institutes' scholars and our staff. This program is one of the important ways in which Humanities Texas creates a bridge between the academy and the citizens of Texas.

Click here for more photos of the Denton and San Antonio institutes. 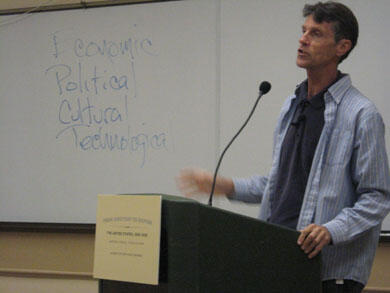