As Abraham Lincoln’s two hundredth birthday approaches, the sixteenth president occupies a uniquely prominent place in our consciousness. Lincoln has always been a favorite subject of writers and scholars, and the steady stream of Lincoln biographies has recently become a torrent. Museums throughout Washington, DC, and beyond are cutting ribbons on new Lincoln exhibitions. While the state-of-the-art Abraham Lincoln Presidential Library and Museum in Springfield anticipates a banner year, the National Archives prepares for the huge crowds that will encircle the building while the Emancipation Proclamation is on display.

Much of the anniversary’s emphasis has come from the almost simultaneous inauguration of the first African American president and the only other Illinois resident elected to the presidency. The majestic Lincoln Memorial, the site of previous historic events, was the scene of a moving pre-inaugural celebration. As the monument and Lincoln’s somber countenance appeared on our television screens, countless inaugural speakers and commentators invoked his inspiring words. When the actor Tom Hanks recited a passage from Lincoln’s 1862 State of the Union Message, he stopped short of its most powerful lines: “In giving freedom to the slave, we assure freedom to the free—honorable alike in what we give, and what we preserve. We shall nobly save or meanly lose the last best hope of earth.”

To celebrate the Lincoln bicentennial year, Humanities Texas has developed an educational resource for classroom teachers. A striking poster, one of a series with the theme “A President’s Vision,” quotes the immortal passage from Lincoln’s Gettysburg Address: “. . .we here highly resolve that these dead shall not have died in vain, that this nation, under God, shall have a new birth of freedom, and that government of the people, by the people, for the people, shall not perish from the earth.” The poster and a corresponding web page will feature images of Lincoln, slavery, and the Civil War, as well as facsimiles of handwritten documents. The web page will also provide a contextual narrative, classroom activities, and bibliographical suggestions. The posters will be available to Texas schools this spring. Happy birthday, Mr. Lincoln! 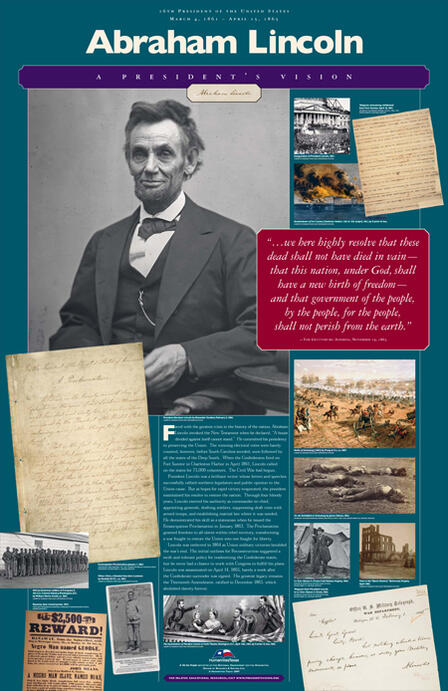