Humanities Texas has supported numerous projects in African American history and culture through its grants program. The following selection of projects comes from all corners of the state: from big cities and small towns and from all types of organizations—universities, historical societies, churches, museums, libraries, and community organizations.

Proposals for major grants are due March 15, and mini-grants can be submitted at any time throughout the year. If your organization is interested in applying, please visit the grants section of our website.

The Resurrection of General Harriet Tubman (2010)
Living history performer Melissa Waddy-Thibodeaux performed at the Brazos Valley Museum of Natural History as Harriet Tubman, recounting Tubman’s role in the Underground Railroad and highlighting the importance of literacy to African Americans in the late nineteenth century.

Abraham Lincoln and the Emancipation Proclamation (2009)
In recognition of African American History Month, the Amon Carter Museum of American Art hosted gallery talks by Dr. Steven Woodworth, professor of history at Texas Christian University, and Rebecca Lawton, the museum’s curator of paintings and sculpture, examining the history of the Emancipation Proclamation and the sculpture “The Freedman” (1836) by John Quincy Adams Ward.

Do You Remember? African American Business in Houston, Texas (2007)
This video documentary chronicles the political activism, influence, and accomplishments of the Houston Citizen Chamber of Commerce, as well as the contributions of its members to the Houston business community.

To Bear Fruit for Our Race: A History of African-American Physicians in Houston (2006)
Working in conjunction with the Houston Medical Forum, the Harris County Medical Society, and the John P. McGovern Museum of Health and Medical Science, the University of Houston’s Center for Public History developed online curricular materials exploring the history of Houston’s pioneering African American physicians and medical institutions.

Democracy and Diversity in Walker County, Texas (2010)
Sam Houston State University history faculty developed a suite of web-based resources for the study of the economic, political, and cultural history of Walker County and East Texas. In February 2010, SHSU held a workshop to introduce local schoolteachers to the site and develop lesson plans supporting its use.

The Sepia Magazine Photo Archives, 1947–1982 (2007)
This exhibition featured photographs from Sepia, a magazine published in Fort Worth in the second half of the twentieth century that focused on African American life and culture.

History in Song (2009)
In a public program at Texas A&M International University, historian and musician Charles Holt surveyed African American musical traditions by performing songs, ballads, hymns, and spirituals. In conjunction, Holt delivered a public lecture for those interested in musical and dramatic careers and participated in an informal panel discussion of African American culture and history.

A Bridge Between Two Worlds: Remembering Bishop College (1881–1988) (2010)
Dr. Michael Phillips prepared a commentary to accompany a series of filmed oral histories conducted with graduates of Bishop College. The commentary, which provided relevant social, political, and historical background to the individuals’ stories, is available online along with the oral histories.

The Buard History Trail: A History of African-Americans in Marshall (2008)
In response to the increased interest in local history prompted by Denzel Washington’s 2007 film The Great Debaters, the City of Marshall created and published a brochure for visitors documenting local African American history.

Rebuilding Memory: The Chambless Field History Project (2010)
Residents of Mart, Texas, will gather oral histories, archival documents, and other materials related to the history of Chambless Field, the local high school football stadium where both white and African American schools played prior to desegregation. In the fall of 2011, Mart will hold a community event and develop a publication celebrating the history of Chambless Field. This project is part of a broader initiative exploring and documenting the town’s history.

Rebuilding Memory: The Mart Black History Project (2008)
A local history project documenting the history of the African American community in Mart, Texas. Local residents were trained to document and archive local history by faculty and staff of Baylor’s Oral History Institute. The project culminated with a public program, an exhibition at the local library, and a limited edition book.

Museum of the Gulf Coast: Black Art—Ancestral Legacy (2009)
This grant supported the rental of the Humanities Texas exhibition Black Art—Ancestral Legacy. Public programs held in conjunction with the exhibition included a performance of traditional African dance, film screenings, and public discussions led by the president of the local African American Cultural Society.

Preserving the History of Black Theatre in Texas (2010)
This traveling exhibition developed by Texas State University-San Marcos will document the history of African American theatre in Texas, focusing on active theatre companies in five of the state’s major cities. The exhibition will travel to six Texas venues in 2011 and 2012. In 2011, UT Press will publish two books by Drs. Sandra Mayo and Elvin Holt exploring this same topic. 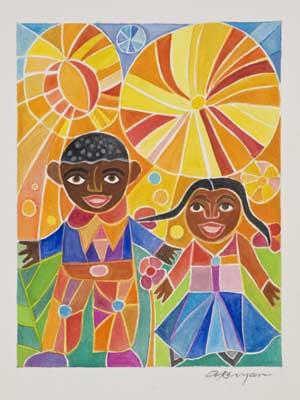 An illustration by Ashley Bryan. 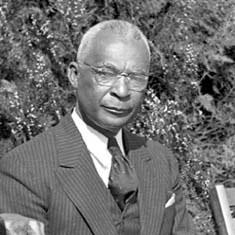 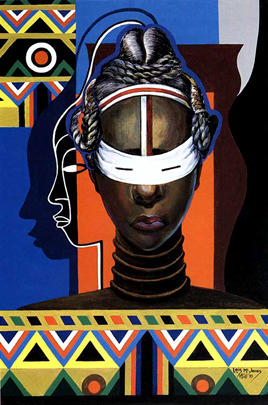 Initiation—Liberia, by Lois Mailou Jones, 1983. Acrylic on canvas. Collection of the artist. Photograph by Tom Jenkins, Dallas Museum of Art.