In mid-April, Humanities Texas Board Member Albert S. Broussard received the Cornerstone Faculty Fellowship in Liberal Arts from his home institution, Texas A&M University. Recipients are recognized for their scholarly achievements, outstanding classroom teaching, contributions to undergraduate and graduate programs, and service to the university.

Each department within the College of Liberal Arts may nominate one faculty member, and three or four fellowships are awarded annually. As a recipient of the four-year fellowship, Broussard was supported by his department chair as well as three external scholars who commented on his professional achievements.

Broussard, who specializes in African American history, moved from Southern Methodist University to A&M in 1985. He became an Elton Lewis Faculty Fellow in 1999 and directed the graduate studies program from 2000–2003.

The fellowship comes from the university's Cornerstone Program, which requires a certain number of hours in liberal arts classes for all students. "As a cornerstone," explains the program description, "a liberal arts education impacts all Texas A&M students and is the foundation of a great university."

At the same university, Mary L. Broussard, Al's wife, has been named a recipient of the 2009 Jefferson Award for outstanding community public service. Mary, director of special projects in the Office of the Dean of Undergraduate Programs and Associate Provost for Academic Services, is a champion for children and young people. She serves on the College Station Independent School District Board as well as with the African American Museum and the St. Joseph Health System, among many other civic organizations. As a recipient of the Jefferson Award at A&M, she is now eligible for the national Jefferson Award.

Humanities Texas congratulates Al and Mary both on their fine achievements. 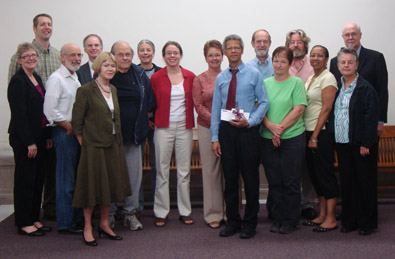