The extraordinary hardship of American prisoners of war has been the subject of countless books, articles, and films. No book about American POWs in World War II has held the public's interest like Laura Hillenbrand's riveting account of Louis Zamperini's incredible experiences. Unbroken has remained atop the best-seller lists for almost four years and was recently made into a major motion picture. Although Zamperini's dramatic odyssey is unique, tens of thousands of other G.I.s also survived incredible ordeals.

Among the firsthand accounts of American prisoners of war featured in this month's e-newsletter are the compelling narratives of Roy Maxwell Offerle, Robert Preston Taylor, and Rufus W. Smith, who, like Zamperini, became prisoners of Japan during the Second World War. Their interviews are from the University of North Texas's extensive oral history collection, which recorded the stories of more than a thousand World War II veterans. Dr. Ronald E. Marcello, directed the program from 1968 to 2005; his successor is Dr. J. Todd Moye. Many of the photographs accompanying the Offerle narrative are from the Wise County Heritage Museum in Decatur, Texas, which features a "Lost Battalion" Room, and from the Texas Military Forces Museum at Camp Mabry in Austin. Rosalie Gregg and Terry Shields of the Lost Battalion Association were also especially helpful in providing information on the history of the "Lost Battalion" and its members.

This newsletter's firsthand accounts also include several from American prisoners in other conflicts, beginning with Private Prescott Tracy's description of life in the infamous Confederate prison at Andersonville, Georgia. Lieutenant Pat O'Brien, an American aviator in Britain's Royal Flying Corps, described his captivity and escape from the Germans in World War I in his 1918 memoir Outwitting the Hun: My Escape from a German Prison. U.S. Congressman Sam Johnson's 1992 memoir documented his seven-year ordeal in the notorious "Hanoi Hilton" during the Vietnam War. His narrative here is an excerpt from the book Captive Warriors: A Vietnam POW's Story.

For further exploration, we have highlighted resources with firsthand accounts of American prisoners of the Korean War, including a recent collection of interviews conducted by the Korean War Veterans Digital Memorial Foundation and made available online by CSPAN. In addition, we have compiled a list of film and radio documentaries focused on prisoners of war from World Wars I and II, Korea, Vietnam, and the Gulf War. They cover a diverse range of subjects, from American prisoners held in Europe or Asia, to German and Italian prisoners confined to prison camps in the United States.

The fate of American G.I.s held in Japanese prisons contrasted sharply with the treatment of German captives held in the United States. Arnold Krammer's article "When the Afrika Korps Came to Texas," excerpted in this newsletter, analyzes the internment of German and Italian soldiers in Texas's twenty-five World War II prisoner of war camps. Allied prisoners of war cheering their rescuers as the U.S. Navy arrives at the Aomori prison camp near Yokohama, Japan, August 29, 1945. They are waving the flags of the United States, Great Britain, and The Netherlands. Naval History and Heritage Command photo. 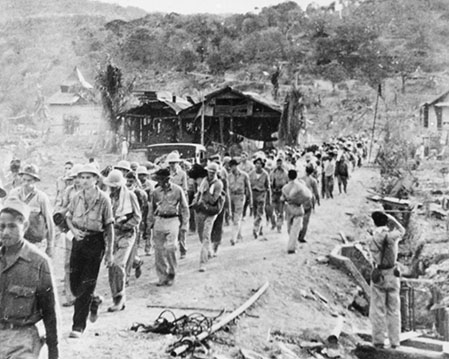