Around the State: Juneteenth Emancipation March and Inspirational Program

On June 19, 1865, Union general Gordon Granger arrived in Galveston and issued General Order Number 3, which read, "The people of Texas are informed that, in accordance with a proclamation from the Executive of the United States, all slaves are free.” That historic day is still remembered and celebrated as "Juneteenth."

On June 19, 2018, the Reedy Chapel A.M.E. Church will celebrate Juneteenth and recognize the chapel’s historical role as the location of the first documented celebration of emancipation that took place in Galveston following the announcement of freedom. The event will begin with a reenactment of the march from the Old Galveston Court House to Reedy Chapel, followed by a program that includes music, lectures, discussions, and fellowship. Traditional Juneteenth refreshments will be served.

This event is free and open to the public.

Those who would like to participate in the march should convene at 5:55 p.m. on the steps of the Old Galveston Court House on 21st Street and Sealy. The march to Reedy Chapel A.M.E. Church at 2015 Broadway (approximately 3 blocks away) begins promptly at 6:00 p.m.

This program is made possible in part by a grant from Humanities Texas. 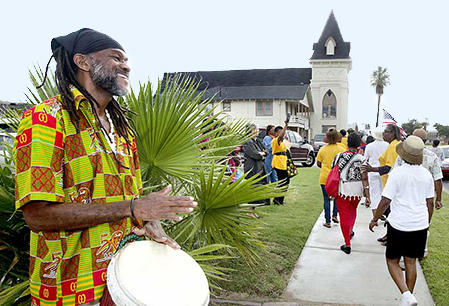 In 2013 and 2014, Humanities Texas awarded grants to Galveston’s Reedy Chapel A.M.E. Church to hold public programs on the history of Juneteenth, the holiday commemorating the announcement of the abolition of slavery in Texas on June 19, 1865.