Around the State: Meet the Jumano Nation at Marfa Lights Festival

On September 3–4, 2021, the Big Bend Conservation Alliance (BBCA) will host members of the Jumano Nation of Texas as part of the annual Marfa Lights Festival. A major community event, the Marfa Lights Festival draws attendees from across West Texas to Marfa for a celebration of the region's culture. Members of the Jumano Nation will meet with the public at the BBCA booth to facilitate conversations about Jumano history, culture, and family connections, illuminating the Indigenous history of the area and the lives and traditions of the Jumano people who populate West Texas today.

The Jumano were a distinct nation occupying the Trans-Pecos region, mentioned by name in Spanish documents beginning in 1583 and continuing until around 1750, when they disappeared from the historical record. In 2016, the Jumano Nation of Texas Council was established with the purpose to seek recognition by the United States. In 2019, the Texas House of Representatives adopted House Resolution 1565, which recognized the historical and cultural contributions of the Jumano Indian Nation to the State of Texas.

Meet the Jumano Nation at the Marfa Lights Festival, which will take place at the Presidio County Courthouse, aims to raise awareness of the Jumano Nation and their deep roots throughout West Texas and the Big Bend region. Participating members include Jumano Tribal Chair JoAnn Betancourt, Tribal Elder/Historian Felix Salmeron, Jumano Council and Living History Coordinator Elizabeth Flores, and Jumano Youth Mentor Harley Flores. The event booth will feature a display of common Jumano surnames, many of which are shared with families in the Marfa region. The display and dialogue program serve to begin building connections between Marfans and Jumano Nation members beyond the festival weekend.

This program is made possible in part by a Humanities Texas grant. 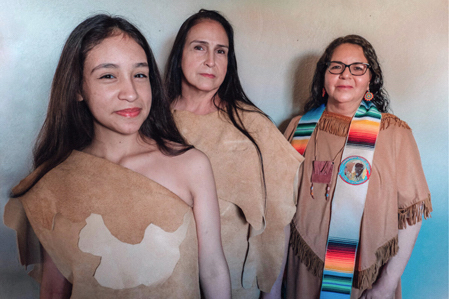 (From l to r:) Jumano Youth Mentor Harley Flores, Jumano Council and Living History Coordinator Elizabeth Flores, and Jumano Tribal Chair JoAnn Betancourt will be at the 2021 Marfa Lights Festival to meet the public at the BBCA booth. Photo by Sarah M. Vasquez.