Fall Reading: Atatürk: Lessons in Leadership from the Greatest General of the Ottoman Empire

A visionary leader and inspiring general, Mustafa Kemal Atatürk brought Turkey independence, made it into a secular democracy, and changed its alphabet, culture, and economy.

In Atatürk: Lessons in Leadership from the Greatest General of the Ottoman Empire, historian and former U.S. Army Reserve Colonel Austin Bay delivers a biography of this remarkable man whose lessons still resonate today. Bay discusses Atatürk’s role as a modernizer—he abolished the Ottoman Sultanate, emancipated women, and adopted Western dress. During his presidency, he embarked upon a program of comprehensive political, economic, and cultural reforms that shaped modern Turkey into the country it is today. Although Atatürk was also a gifted and audacious military officer, his military accomplishments are often overlooked.

In action-packed narration, Bay focuses on Atatürk’s military career, beginning with his days as a young cadet studying military history and strategy, then moving on to the battlefields of Libya, Gallipoli, and the Russo-Turk front during World War I. He also gives a stirring account of how Atatürk led his people in the Turkish War of Independence.

Bay, who teaches a strategy seminar at The University of Texas at Austin, has written on military issues for numerous publications, including The Wall Street Journal, The Weekly Standard, and the Houston Chronicle. He is a contributor to StrategyPage.com and has appeared on numerous television networks, including Fox News, MSNBC, and CNBC, and on programs such as Nightline. For eight years, he was a commentator on NPR’s Morning Edition. Bay served on active duty during Operation Desert Storm and in Iraq in 2004. He is coauthor of A Quick and Dirty Guide to War.

Atatürk: Lessons in Leadership from the Greatest General of the Ottoman Empire, released this year by Palgrave MacMillan, also contains a foreword by General Wesley K. Clark (Ret.), who served in the United States Army for thirty-four years and rose to the rank of four-star general as NATO’s Supreme Allied Commander, Europe. He is the author of A Time to Lead as well as the bestselling books Waging Modern War and Winning Modern Wars. 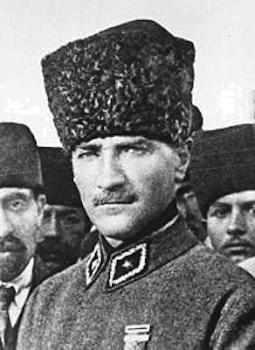