In January, U.S. Representative Lloyd Doggett presented Neil Loewenstern with the Outstanding Teaching of the Humanities Award. Humanities Texas presents these awards annually to twelve of the state's most accomplished and influential primary and secondary teachers.

Loewenstern teaches courses in world geography at the Liberal Arts and Science Academy at Austin's LBJ High School. He also teaches several upper-level electives, including a course titled "Facing History and Ourselves: Holocaust and Human Behavior." Loewenstern serves as sponsor of the Jewish Culture Club, the Human Rights Club, and the school's chapter of the National Honor Society.

What follows is an excerpt from an essay in which Loewenstern describes his philosophy as a teacher of the humanities:

I seek to give my students knowledge of the world around them and empower them to meaningfully interact in that world. While giving students the information they need to comprehend the ever-changing world around them, the critical thinking skills they develop in my courses help them to become active participants in their local communities, engage in national dialogues on important issues, and effect change on a global level.

My classes are largely project-based and so students are usually engaged in collaborating with group members, doing independent research, and interacting with the whole class through presentations and simulations. In my World Conflicts unit, for example, students take on the role of ambassadors to the United Nations Security Council, where they try to pass resolutions on such issues as the Israeli-Palestinian conflict and the crisis in Darfur, Sudan. As members of the Security Council, they represent a variety of perspectives on these conflicts and vigorously debate what should be done to solve them.

Such simulations challenge the students to take a deeper look at the world around them. They must ask questions and find answers about the effectiveness of governments and world institutions, the causes and effects of poverty, where and why people do not have civil liberties, and the distribution of resources and the relationships that are created between countries. They begin to understand and experience the complexity of the world around them, what geographers call "geographic thinking." My students see what solutions are available to these many problems and difficult issues and, at the same time, develop an understanding that people around the world face major challenges implementing these solutions.

I hope that the information and experiences that I provide for my students will inspire them to embrace those challenges and go out into the world and effect positive change. I was pleased last year when several of my former students asked me to sponsor their Human Rights Club. After learning about the situation in Darfur, many of my students helped organize and participated in a rally at the State Capitol last year to raise awareness of the genocide. While I do not expect all of my students to choose a career in humanitarian aid or a humanities major in college, what I do hope is that I have raised their level of awareness of the world around them and the impact that their decisions make on that world. 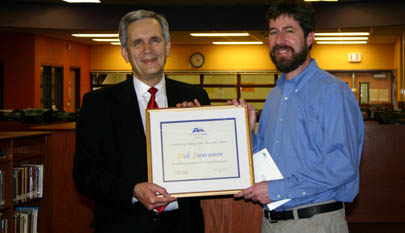