Barbara Smith Conrad, the internationally acclaimed mezzo-soprano and educator, is the subject of a new documentary and the recipient of a 2011 Texas Medal of Arts Lifetime Achievement Award. As an undergraduate, Conrad was denied the opportunity to perform at The University of Texas at Austin due to her race, but the university and the state have since recognized her talents and her contributions to the struggle for civil rights. In 1985, Conrad visited Austin for the first time since graduation to accept the University of Texas Distinguished Alumnus Award. In 2009, the Texas House passed a Resolution to Honor Barbara Conrad Smith, fifty-two years after it pushed for her removal from the College of Fine Arts's production of Dido and Aeneas.

In addition to opera, Conrad’s musical heritage includes African American spirituals. In her hometown of Center Point, music tied the community together. Family and neighbors gathered in the Baptist church to sing hymns, and Conrad’s musical family took her to see the famed African American singer Marian Anderson, whom Conrad later played in the film Eleanor and Franklin: The White House Years.

The title of one of these spirituals, “When I Rise,” is also the title of a new documentary film about Conrad's life and career, directed by Mat Hames and produced by Don Carleton, executive director of the Dolph Briscoe Center for American History, with associate directors Ramona Kelly and Alison Beck. The film, which features archival footage, interviews, and performances, recently premiered on PBS.

"I’d been looking for a way to make a documentary about Barbara’s story for a while," Carleton told Austin360. “Part of the Briscoe Center’s mission is to create ways to educate the public in history, and a film is a great way to get that history out to a much larger audience.”

In 1956, a nineteen-year-old girl from a small east Texas town arrived in Austin to attend The University of Texas (UT). Like her fellow students, she was excited to begin her education at one of the state’s finest universities. Barbara Louise Smith, however, was unique in two important ways: she was one of 104 African Americans enrolled at UT in its first year as a desegregated institution, and she was a remarkably talented singer.

These two factors put Smith at the center of a controversy over civil rights and desegregation in 1957, when she was cast as the female lead in the College of Fine Arts’s production of Dido and Aeneas, playing opposite a white male student. At the time, segregation was the norm in Austin—no dormitories, restaurants, or barbershops served African American students, and the Ku Klux Klan marched openly down Congress Avenue. Once news of Smith’s casting spread, she began receiving threatening calls and was accosted on campus by an unknown man who spat in her face. Eventually, the uproar caught the attention of the Texas Legislature, where Smith’s own representative from east Texas, Joe N. Chapman, threatened cuts in the university’s appropriation if Smith were allowed to perform. Ultimately, UT President Logan Wilson decided to remove Smith from the role, leaving her feeling betrayed but determined to continue her education. “After the initial shock and hurt had passed,” she told the Daily Texan, “I began to realize that the ultimate success of integration at the University was much more important than my appearance in the opera.”

The singer Harry Belafonte, hearing of her plight, offered to fund her training at the institution of her choice if she left Texas, but Conrad chose to complete her education at UT, recalling later that nobody could “run me out of my home state.” After graduation, however, she began an illustrious career in New York (she changed her name to Conrad in 1959). She sang with the Metropolitan Opera in New York for eight years, worked with leading conductors such as Lorin Maazel, Leonard Bernstein, and James Levine, and performed throughout the United States, Europe, Canada, and South America.

Conrad remains active as an artist and educator. In addition to the private vocal studio she maintains in Manhattan, she is currently the artistic advisor and Ambassador for American Spirituals at the Dolph Briscoe Center for American History at The University of Texas at Austin. 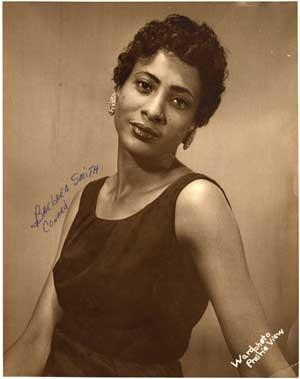 When I Rise film poster. Barbara Smith Conrad. Promotional image from the film When I Rise. Photo courtesy of Alpheus Media.