The Bard at the Byrne-Reed House

On September 30, teachers from around the state gathered at the Byrne-Reed House for our first-ever workshop on the works of William Shakespeare. Five distinguished Texas scholars gave presentations and interacted with teachers in small-group primary source sessions. Below, we feature excerpts from each scholar's presentation.

Elizabeth Richmond-Garza, associate professor of English at The University of Texas at Austin: "Shakespeare's Theatre in Context: From His Stages to Our Classrooms"

One of the things I think is crucial to imagine is that although Shakespeare's plays would have been popular entertainment, for our students it’s often something that is remote. Whether we’re teaching these courses in Moscow or Shanghai, whether we’re teaching them in Brownsville, New York, or in London itself, these texts are not always right in front of people. We need to bring them back right in front of people. And as you know, sometimes we have to debunk a little bit the way they may have encountered Shakespeare before. One of the things to remind our students about with Shakespeare is: don’t be quite so deferential. Shakespeare’s audience certainly was not. Anyone who looks at the period sketches of the theaters—and these are some of the things I always share with my students—is immediately aware that these are open-air performances where thousands of people are looking right at the actors. Many of them [were] about as far away as you and I are—sometimes even important people were sitting on the stage. These are not polite nineteenth- and twentieth-century theaters where it’s dark, where everything tells you, "sit quietly, you’re in a museum, pay attention." These are interactive performance spaces where a lively production with elaborate costumes—not very complicated sets, but elaborate costumes—would have played to the audience. Anyone who remembers the Shakespearean soliloquy remembers that much is direct interaction. Anyone who remembers what animals and other strange things come on to the stage is aware that this is not a sedate experience . . . . Most of all it’s live, very active, and very text-centered. . . .

One way to talk about the plays is to make them contemporary. Elizabeth I lent her own clothing to the actors to use. So when actors appeared on stage, especially in any of the plays except the Roman ones, like Julius Caesar, they would have been dressed in contemporary style. As pleasing as it is to show people something like Shakespeare in Love, it looks period. It’s all about lace and tights. [Originally] it was very different from that. Whenever I work with Shakespeare one of the things I want to share with students is the immediacy of the theater. The setting might have been very exotic. It might have been set in another country, a few years earlier, or in another environment, even an imaginary world, like some of the fantastical things that happen in Macbeth. But it was played with famous, viable, contemporary actors often very much in contemporary dress.

What I wanted to end up talking about today is Christian vs. classical tragedy. I think that Aristotle’s emphasis on probability and necessity in the unfolding of the action is characteristic of a Greek deterministic sense of people’s lives. We don’t start Oedipus with him getting the story: “you’re going to end up marrying your mother and killing your father.” He doesn’t hear that and then accomplish it in the course of the action. He finds out about what’s already written down, already happened. With Macbeth, [by contrast,] it plays out. He gets the prophecy, and we get to see him in the process of commitment to the action, which is not something that happens in classical tragedy. The Greeks don’t really have a sense of what we would call free will. Whether you believe in free will or not, whether it’s part of your doctrine, it’s certainly a concept that we have. We have the idea that we have our own agency and we can decide what to do. The Greeks just didn’t have that. They didn’t have a vocabulary for it, anyway. They didn’t have a way of talking about will as a faculty that could have made judgments that would not somehow be determined by outside forces, like witches.

That’s one of the great things about Macbeth, and one of the things that opens it up for discussion. You wonder—does Macbeth really have a chance? Witches come out and affect his mind. How much of it is his freedom of will? "Is this a dagger which I see before me—" T. S. Eliot calls that a perfect objective correlative, and he uses it as an example: do I take that dagger, do I plunge it into the king or not? That is the theme of the play, that decision. So when Auden says Christian tragedy is the "tragedy of possibility," [he means that] the emotion it arouses is: What a pity it was this way when it might have been otherwise. Whereas Greek tragedy is: It had to be this way, how sad. . . . With Macbeth, it’s more voluntary. He’s not stuck in the story; he and his wife write the story. At least, the play leaves that possibility open. I think this is maybe the most deterministic of Shakespeare’s dramas, so it’s a play that allows you to bring that out for your students. Where is Macbeth’s agency? How hedged in is it? How many forces are operating on him to push him in this direction? Can you really say that he’s free?

In A Midsummer Night’s Dream Shakespeare moves effortlessly from the lurching, choppy speech of Aegeas to the lyrical protestations of the young lovers, from the swift, skipping rhymes of Puck to the gorgeous and exotic-sounding verses of Titania, from the easy naturalness of the mechanicals’ dialogue to the ridiculous artificiality of their dramatic production.

One reason for the dramatic importance of the second scene is that it introduces an interesting and important commentary on the action of the first scene. For when Bottom wants to find out what sort of part Pyramus is, he asks Quince if Pyramus is a lover or a tyrant, but in this question Bottom makes plain the simplistic understanding of Elizabethan drama, as if all major characters in that drama were either lovers or tyrants, very simplistic indeed. But consider for a moment what Shakespeare has done in the first scene of the play, where his audience encounters essentially two kinds of dramatic characters: lovers and tyrants. Aegeas, the old man, who is determined to treat his daughter as a possession, is easily identifiable as a tyrant, and as Shakespeare presents him—bitter, arbitrary, irrational—he is hardly more complex than Bottom’s Ercles. Opposing Aegeas in this scene are Lysander and Hermia, the lovers. He is old; they are young. His speech is awkwardly prosaic and theirs is regularly lifted by flights of poetic fancy. But their view of love is dangerous to them. They cannot resist . . . acting out the roles of tragic and doomed lovers.

The problem with taking the conventions of romantic love as seriously as Lysander and Hermia do in this scene is that they become entrapping conventions. Conventionally true love can prove itself only in the test of death. The love language of Lysander and Hermia then drives them toward the fate of Romeo and Juliet. But Shakespeare keeps them from moving in that direction because this play is a comedy, where mistakes are corrected, where people like the Duke change their minds and where Oberon, and behind Oberon, Shakespeare, oversee the lovers’ confusion in the woods so that all ends well.

James N. Loehlin, Shakespeare at Winedale Regents Professor of English at The University of Texas at Austin: "Performance-Based Strategies for Teaching Shakespeare"

Performance can be an effective teaching strategy in getting students to really engage with the material. The number one thing is just that it’s fun: that it’s engaging, that for the students it gives them a kind of change of pace. They’re not sitting at their desks, they’re on their feet, they’re using their voices, they’re using their bodies in some way in order to have an active style of learning. It’s a long school day, and it’s nice to have something that gives you some kind of variety like that. . . . Another thing that I think is really valuable about performance with the teaching of literature is that it does require a particular kind of attention to language. . . . By getting inside characters through working on the performance, you have to know why they speak the words they speak. You have to theorize about their internal state and so forth. If nothing else, you have to pay closer attention to those words if you are speaking or reading them aloud than if you’re just glancing over them on the page. So I think that is really important in terms of learning, especially if you have students actually memorize texts. . . . To learn a piece of text in order to perform it requires a level of understanding that maybe goes beyond what you might get by some other means. Performance forces students to recognize the way in which a literary text demands interpretation. There’s not just one meaning in a given play. 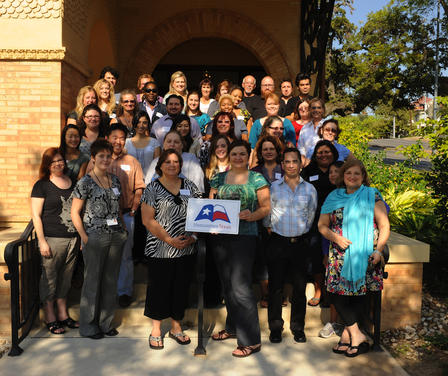 Teachers from around the state gathered at the Byrne-Reed House on September 30. 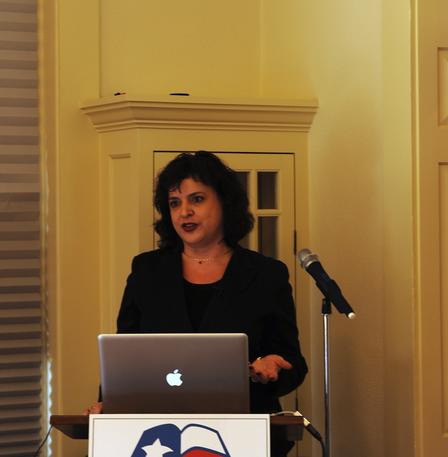 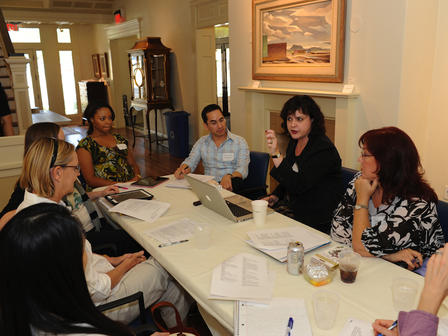 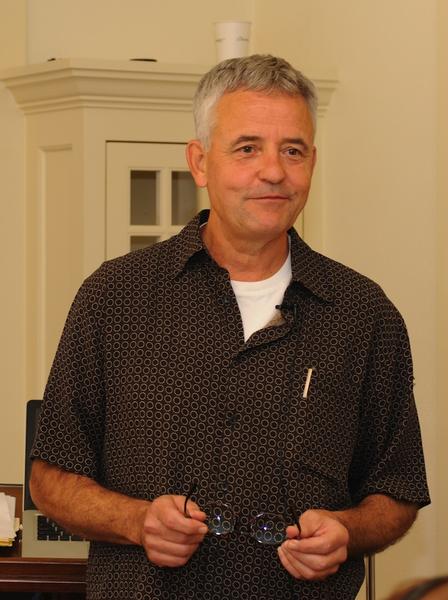 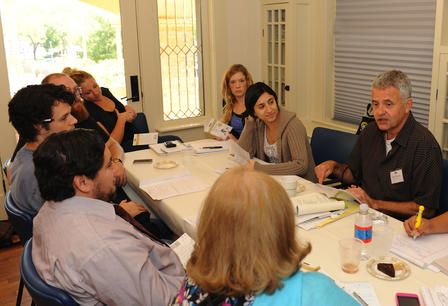 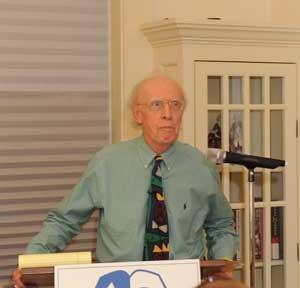 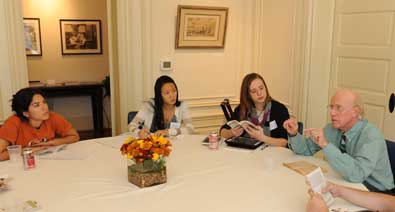 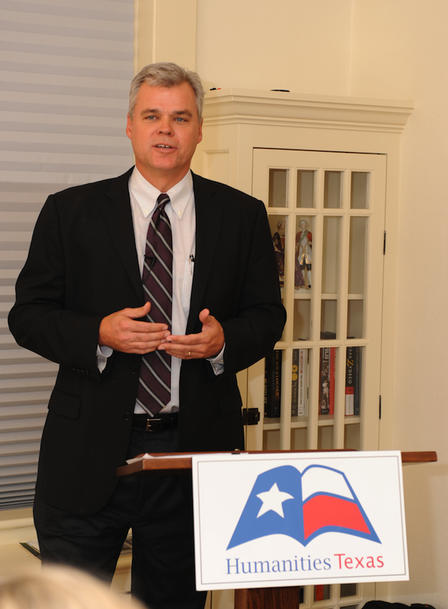 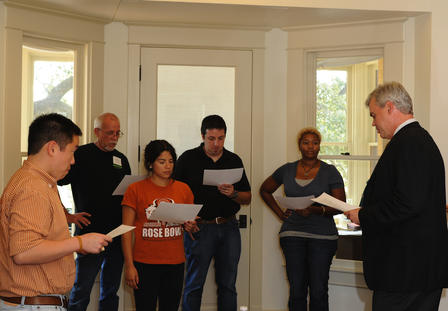