Bill Hobby Ties Together the Threads of History

The Threads of History

Ann had agreed to tape the interview in one of the heavenly courtyards, but St. Peter thought the TV crew was from Fox News and wouldn't open the Pearly Gates. After he checked with the Boss he told them to go to Hell.

Ann was eager to come. Seems that the angels spend their days and nights singing and praying—not exactly Ann's idea of a good time. And it's not a long trip. Austin isn't far from Heaven—just a short trip on Southwest Airlines. No farther than Houston.

One hundred and seventy-three years ago today Texas declared independence from Mexico. We would not be celebrating that anniversary but for Sam Houston's victory at San Jacinto, so the San Jacinto Rule is in effect.

The San Jacinto Rule forbids speakers from talking about the Texas Revolution longer than the eighteen minutes it took Sam Houston to win it at San Jacinto. It won't take me even that long to put you to sleep! But let's take a few of those minutes to explore some of the threads that run through Texas history and tie it together in unexpected ways.

There's no better place to start than Sam Houston, a legendary figure in American history. In fact, he spans it. At the suggestion of his mentor Andrew Jackson, Houston, on his way to Washington for his first session as a Tennessee congressman in 1823, stopped at Monticello to meet Thomas Jefferson. In other words, a veteran of the War of 1812 and an acquaintance of the third President of the United States, of the Marquis de Lafayette and Alexander de Tocqueville, was the father of a United States Senator from Texas who served within my lifetime.

Senator Andrew Jackson Houston held the same seat his father held. The Houston seat was later held by Lyndon Baines Johnson, whose grandfather Brother George Washington Baines helped baptize Sam Houston. Told that immersion in Rocky Creek would wash away all his sins, Houston said "I hope so, but if they were all washed away, the Lord help the fish down below." How's that for a thread of history?

Picking up another thread, Thomas J. Rusk was elected to the U.S. Senate at the same time as Sam Houston. Senator Rusk's law partner's great-great-granddaughter is Senator Kay Bailey Hutchison. Enough of the threads of history. Let's get back to my favorite subject—Sam Houston.

In April, 1832, Houston went to Washington to get some stimulus for the Cherokee Nation from the Great White Father (Andrew Jackson). Congressman William Stanbery of Ohio insulted Houston (and Jackson) in a speech on the floor of the House and ignored Houston's challenges. Bad career move. Stanberry didn't know his man.

After a convivial dinner with some of his Congressional buddies (including the Speaker of the House) on April 13, Houston encountered Stanberry on Connecticut Avenue. Armed with his signature hickory stick, Houston beat Stanberry to the ground. Stanberry tried to shoot Houston but the gun didn't go off. For some reason, that made Houston really mad, so he raised Stanberry's legs and beat him severely about his nether regions.

Houston violated the U.S. Constitution when he violated Stanberry. The Constitution says that a Congressman "shall not be questioned in any other place" for a speech made on the floor of Congress. Out of deference to the ladies in the audience at the trial, nobody specified that "other place." Houston was a violent man. Had his dinner companions not intervened, the Governor of Ohio would have had to call a special election. The House ordered Houston arrested and tried.

While awaiting trial, Houston, clad in his Indian garb, had dinner with Andrew Jackson at the White House. Jackson told Houston to get a proper suit for the trial before the House. Houston said he couldn't afford a suit so Jackson bought him one. Houston was convicted. The Speaker pronounced judgment, saying "I reprimand you," then went on to other business. The prominent Baltimore lawyer Houston had hired couldn't get him acquitted, but at least got him off with a brief sentence. Three words is a pretty brief sentence. The lawyer is better known to history as the songwriter Francis Scott Key. How's that for a thread of history? When Houston returned to Texas he wrote President Jackson thanking him for his support and hospitality. In that letter Houston prophesied his own role in Texas' independence from Mexico and its subsequent admission to the Union by writing: "I shall lay before you a new Estremadura."

When Texas was admitted to the Union on December 29, 1845, Houston's promise was redeemed, his prophecy fulfilled—for a while. The controversy over Texas' admission echoes in the current session of the Legislature. All states before Texas had been admitted by treaty requiring a two-thirds vote of the U.S. Senate. More than one-third of the U.S. Senate didn't want Texas in the union, so Texas had to be admitted by a resolution requiring only a simple majority.

Houston's personal life was at least as colorful as his political life. While serving under Andrew Jackson at Horseshoe Bend in 1814, Houston was wounded in the groin by an arrow. The wound never healed and may have caused the breakup of his eleven-week marriage to Eliza Allen when he was governor of Tennessee in 1827.

Houston just wasn't Texan enough for the Texas Legislature, so they kicked him out of office twice for supporting the Union. First from the U.S. Senate for opposing the Kansas-Nebraska Act, then from the Governor's office. Sam Houston even anticipated Abraham Lincoln with the words, "A nation divided against itself cannot stand." Now let's pick up another thread of history.

Franklin, a founder of the United States, had a grandson who tried to keep Texas from becoming one of them. Franklin's grandson, Richard Bache, followed his grandfather into the family business as postmaster in Philadelphia. Bache first appears in Texas history when Houston assigned him to guard the captive Santa Anna after San Jacinto. He next appears as the only member of the 1845 Texas annexation convention to vote against joining the Union, then as a state senator from Galveston. Why did Bache vote against joining the Union?

Maybe he was drunk. When he ran for the Senate from Galveston an opponent said he was drunk and he fell off the platform. Bache won anyway and became one of Babe Schwartz's predecessors. Babe is with us tonight.

Maybe he wanted to avoid extradition. As postmaster he went missing from Philadelphia in a big hurry because $50,000 had gone missing from the Post Office.

Maybe he wanted to save his brother-in-law George Mifflin Dallas, vice president of the United States, the bother of presiding over a couple of Texas senators. I can identify with that. You remember Vice President Dallas. They named some little town up near Fort Worth for him. How’s that for a thread of history?

We Texans are still wrestling with history. As William Faulkner wrote in Requiem for a Nun, "The past is never dead. It's not even past." Abraham Lincoln and Charles Darwin were born on the same day 200 years ago last month. We Texans have pretty well accepted Sam Houston's view of Lincoln, but some of us are still not sure about Darwin. We Texans have struggled for millions of years to become human beings—and we have made it! We walk erect and have opposable thumbs! We have evolved from Neanderthals into Homo sapiens! But now come members of the State Board of Education with an "intelligent design" to say we haven't evolved at all! And they are partially right! They themselves have not evolved! I have never actually met any of them, but I suppose they walk erect—but with Neanderthal brains. Not good thinking! Any University of Texas regents here tonight will be pleased to know that astronomers at the McDonald Observatory, under the leadership of Dean Mary Ann Rankin, who is with us tonight, have confirmed what we see on the red-and-blue political map of the nation.

For years McDonald astronomers have measured the distance to the moon and found that the moon gets farther away from Texas all the time! Then the astronomers look through the big telescope and see billions of galaxies fleeing Texas so fast they turn red! And they are turning redder all the time! Scientific proof that Texas is the most red-shifted state in the entire universe! Good thinking! Let's give those astronomers astronomical bonuses!

Three weavers of our threads—historians of these events—are with us tonight. Patsy Spaw is the historian of the Texas Senate and its Secretary. James Haley is the definitive biographer of Sam Houston. H. W. Brands wrote Lone Star Nation, the story of the Texas Revolution, and a biography of Senator Bache's grandfather Benjamin Franklin. Ted Fehrenbach is the dean of Texas historians. Ted could not be here tonight to answer the charges, but he and Bill Brands have vandalized Texas history. They have taken away our cherished myths! How can you have a Texas Revolution without the line in the sand and the yellow rose? Patsy, James, Bill, Babe, Mary Ann—would you please rise. Well, I don't hear any more musket fire. The Twin Sisters from Ohio are silent. But I hear terrified shouts of "Me no Alamo!" and "Me no Goliad!" The San Jacinto Rule has kicked in. The battle is over. Texas is free—and so are you. 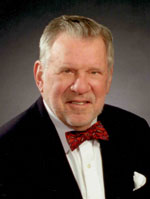