The Bishop's Palace: A Galveston Treasure

On April 16, 2010, a group of board members and staff from Humanities Texas toured Galveston's historic Bishop's Palace with Dwayne Jones, executive director of the Galveston Historical Foundation. In honor of Preservation Month, we're featuring photos of the house and information about its remarkable story.

This grand home, which was cited by the American Institute of Architects as one of the hundred most important buildings in America, was built from 1886 to 1892 by prominent lawyer Colonel Walter Gresham. Its architect, Nicholas Clayton, was considered Galveston's premier architect.

The house is built from native Texas granite, white limestone, and red sandstone, which were all cut and shaped on the premises. The hand-carved interior woodwork is made of several rare woods, such as rosewood, satinwood, white mahogany, American oak, and maple. The wood surface on each side of its massive sliding doors matches the room it faces.

On Gresham's request, Clayton showcased rare and luxurious materials, such as African marble and pure silver, in the house's numerous fireplaces.

Other lavish details include hand-carved stone ornamentation, wrought-iron railing, and an inventive cooling system comprised of slatted windows that allowed breezes from the Gulf to enter without admitting the hot sun as well.

The main stairwell is famously beautiful. Note the domed ceiling with an octagonal skylight, stained glass windows, and marble columns.

Colonel Gresham was an attorney and entrepreneur who came to Galveston from Virginia following his service in the Civil War. He was a founder of the Gulf, Colorado, and Santa Fe Railroad, and also served in the Texas Legislature. His wife, Josephine, with whom he had nine children, was an amateur painter whose work can be seen throughout the house. Painted wall details, such as in the image below, were recently discovered in the basement. Josephine Gresham called the area her "grotto," and some of her painted walls survive.

The house withstood the 1900 storm with relatively little damage. Aside from some basement flooding, it survived Hurricane Ike intact as well.

In 1923, the Roman Catholic Diocese of Galveston purchased the building, and it served as a bishop's residence until 1963, when the diocese opened the building to tours. The house belongs to the Galveston-Houston Catholic Archdiocese and is managed as a museum by the Galveston Historical Foundation. The Bishop's Palace in Galveston. All photos on this page by Humanities Texas unless otherwise noted. 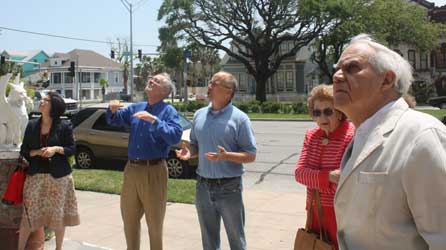 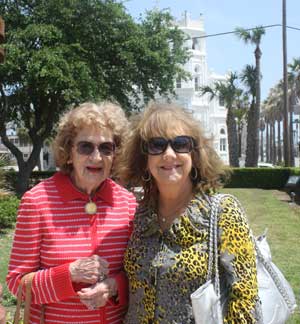 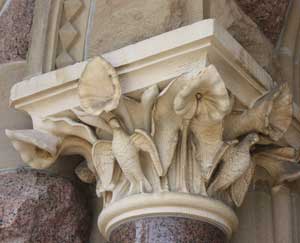 Detail of a column capital by the house's entryway. 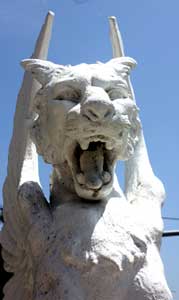 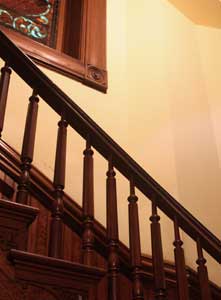 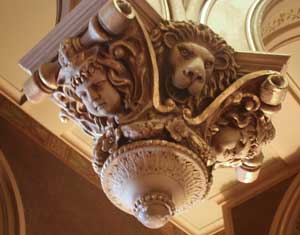 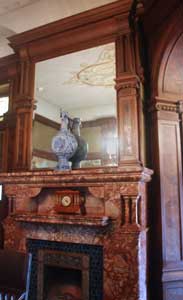 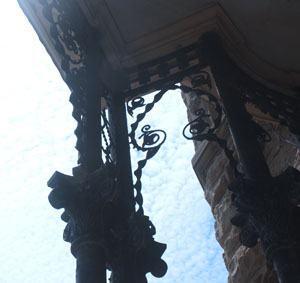 Detail of ironwork on the front porch. 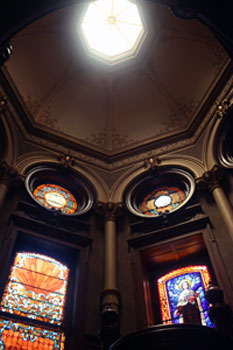 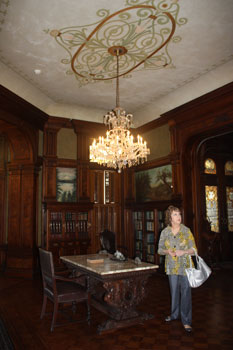 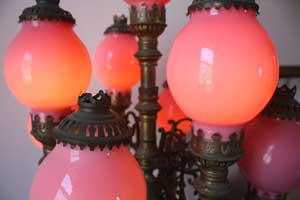 Detail of a historic lamp on the second floor.

An example of Josephine Gresham's wall painting, discovered in the basement. The Bishop's palace amidst debris on Broadway following the 1900 hurricane. Photo credit AP.