A Book Fair is Born!

The genesis of our Holiday Book Fair was largely spontaneous. In the autumn of 2008, Miguel Gonzalez-Gerth requested that we host an author's event to tout the publication of his book of poetry. While I wanted to acknowledge his work, I doubted that a single author would draw a sufficient crowd. But then came a spate of important new books by local but nationally prominent authors, including Lawrence Wright's The Looming Tower, Elizabeth Crook's The Night Journal, Bill Wittliff's A Book of Photographs from Lonesome Dove, Paul Woodruff's The Necessity of Theater, Jacqueline Jones's Saving Savannah, and H. W. Brands's Traitor to His Class. These major works would provide a critical mass of new books to sell at a Humanities Texas event.

Another consideration was that I’ve always enjoyed giving books as presents, especially volumes inscribed by their authors. Many other shoppers, I assumed, must share this sentiment. And, since it is difficult to track down authors when an inscription is needed, why not gather the local authors together for a holiday book fair—a one-day event in December?

Thus, in late October, I came into the office one morning and announced: "We're not having enough fun! Let's organize a holiday book fair." Yvonne Gonzalez and other members of the staff liked the idea, but that evening, my wife LeAnn cautioned against saddling myself with yet another crash project before Christmas. She had a valid point. October and November were already shaping up as impossibly busy months for our staff. So I took her counsel to heart. But when I told the staff that I was having second thoughts, they encouraged me to give it a go. They didn't seem to mind the fact that all of us would have to work even harder and longer than usual. We even convened a staff meeting to explore the idea, and everyone bought into it. Yvonne's encouragement was perceptive and personal: "This event is really you!" she declared. But the inspiration that ultimately swayed me was the the suggestion that we could use the event to raise money for libraries affected by Hurricane Ike. This opportunity and the staff's enthusiasm trumped the inclination to wait almost two years until the Byrne-Reed House was restored.

The Book Fair proved to be an ideal team-building activity for the staff. Everyone pitched in and worked together on tasks in which they excelled. They decorated the building's interior with garland, bows, and candles. Outside, a large banner advertised the book fair, while yard signs bearing enlargements of the books' covers dotted the lawn. Our baking committee created a large assortment of delicious pastries for sale to hungry book-buyers. The staff's ability to organize such an elaborate event in such a short period of time demonstrated their extraordinary capability.

Although we managed to recruit twenty-three authors for the Book Fair, finding adequate space for all of them was a challenge. The building's largest room had been divided up into small cubicles during an earlier renovation. Fortunately, the ornate dining room could accommodate fourteen authors. The others were stationed in a room that is now the front porch. In 2008, however, it was "the arch room," so named because the brick arch originally and presently spanning the main entrance was then in the middle of a small conference room.

Almost immediately, the Book Fair became a carnival-like party. The authors, instead of sitting quietly in their designated chairs, cruised around the foyer, greeting one another enthusiastically, sharing stories, and buzzing around the table of delicious muffins, cookies, and other pastries the staff had baked. The festive atmosphere was infectious.

On December 8, 2018, our staff held this year's Holiday Book Fair, ten years after our inaugural event. Many of the current staff are veterans of that 2008 event, including Liz James, who has coordinated the majority of our Book Fairs. But the Humanities Texas staff were not the only veterans of that first Book Fair. Among the twenty-seven authors who participated this year, six of them were on the roster at the 2008 event: Sarah Bird, H. W. Brands, Elizabeth Crook, Bill Wittliff, Paul Woodruff, and Lawrence Wright. Our best customers, Mickey and Jeanne Klein, also attended that first Book Fair and almost all subsequent ones.

View a sildeshow of photos of the 2018 Holiday Book Fair or learn more about this year's authors and their titles. 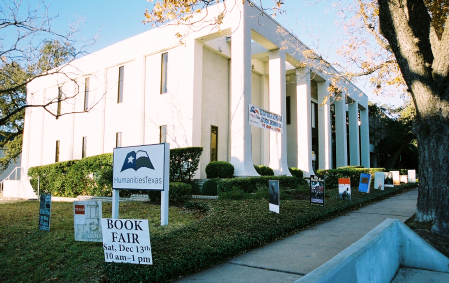 Authors including Bill Wittliff, Lawrence Wright, and Elizabeth Crook visit with each other in the dining room. 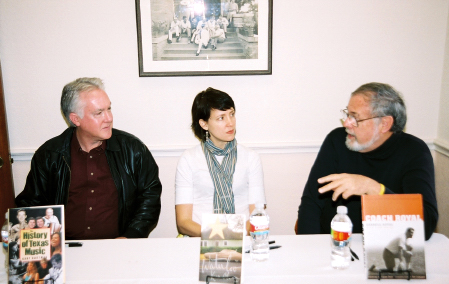 Gary Hartman, Karen Olsson, and John Wheat at their author table in the "Arch Room." 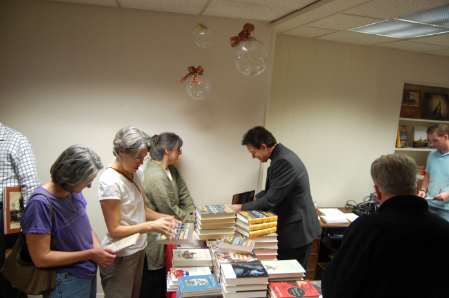 Lawrence Wright signs a book for a shopper at the checkout station. 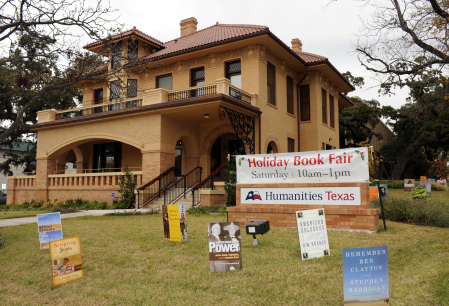 The 2011 Holiday Book Fair at the newly restored Byrne-Reed House.