The Carl B. & Florence E. King Foundation has awarded Humanities Texas a $20,000 grant to support professional development programs for teachers in the Dallas-Fort Worth Metroplex.

In the past decade, Humanities Texas has conducted 105 one-day workshops and three-day institutes for social studies and language arts teachers throughout the state. These programs offer teachers the opportunity to study with leading scholars in their fields. Faculty place special emphasis on teaching with primary sources. Participants return to their classrooms with a deeper understanding of the topics mandated by the state curriculum standards, along with a range of resources that they can immediately put to use.

Past workshops in the Dallas-Fort Worth area have covered the U.S. Constitution, the Second Great Awakening, the Civil War, and the branches of the U.S. government. Faculty members have included Pulitzer-Prize-winning historians Daniel Walker Howe (University of California, Los Angeles), David Kennedy (Stanford University), Jack N. Rakove (Stanford University), and Gordon S. Wood (Brown University), as well as Jeffrey Engel (Southern Methodist University) and Charles Flanagan of the Center for Legislative Archives at the National Archives.

The King Foundation grant will support one or two one-day workshops in North Texas during the 2014-15 school year.

Humanities Texas piloted our mentoring program in the Austin Independent School District during the 2013–14 academic year. With the help of the King Foundation, we look forward to bringing it to districts in the North Texas region.

This is the second grant the King Foundation has awarded to Humanities Texas in the past several years. In 2012, the foundation provided Humanities Texas a grant of $15,000, also to support teacher professional development programs in the Dallas-Fort Worth area.

Carl B. and Florence E. King started the Foundation that bears their names in 1966. Beginning with gifts from Mr. and Mrs. King, as well as a later bequest from their daughter, Dorothy, the foundation has now grown to more than $50 million in assets and distributes approximately $2 million per year. Its areas of focus include education, children and youth, and arts, culture, and history. In Texas, the foundation's grantmaking is focused in the Dallas-Fort Worth area and West Texas.

For more information about the Carl B. & Florence E. King Foundation, visit http://www.kingfoundation.com/. David M. Oshinsky, professor of history at NYU and director of the Division of Medical Humanities at NYU Medical School, addresses teachers at the June 2012 "The Making of Modern America" institute in Dallas. 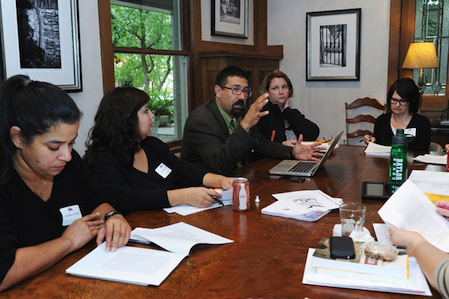 Raúl A. Ramos, assistant professor of history at the University of Houston, discusses the Texas Revolution with participants in the October 2013 "Texas Before Statehood" workshop in Dallas. 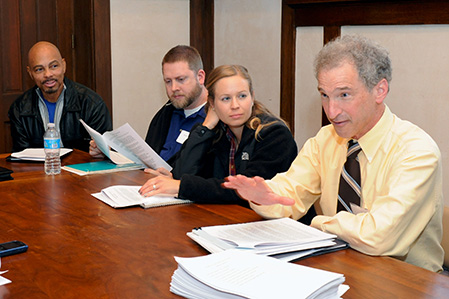 Daniel Feller, professor of history at the University of Tennessee, Knoxville, and a group of teachers discuss sections of the Constitution related to slavery at the March 2013 "Slavery, Secession, the Civil War, and Reconstruction" workshop in Dallas.