Throughout February, McAllen’s South Texas College celebrated Black History Month with academic lectures, film screenings, and a poster display exploring African American history. "All the scheduled activities were designed to commemorate and celebrate the African American experience," said Chris Davis, event organizer and STC history instructor. The month-long celebration was made possible in part by a grant from Humanities Texas.

On February 9, Dr. Daina Ramey Berry of The University of Texas at Austin gave a lecture called "For Sale, A Young Negro Woman: Auctions, Breeding, and Enslaved Women in Early America." Dr. Berry, a leading scholar of gender and slavery, presented her current research addressing the gendered aspects of slave work and pricing.

On February 21, Dr. Brent Campney of The University of Texas-Pan American discussed "A Fight for the Rights of My People: William Bolden Townsend and the Struggle against Lynching and Racial Violence." Dr. Campney, an expert on racial violence and black resistance, presented the story of William Bolden Townsend, an African American leader who fought against racist violence in Kansas around the turn of the twentieth century.

A related film series provided more opportunities for learning. Night Catches Us, a drama about the Black Panther movement in Philadelphia, screened on February 23 at 12 p.m. in the Pecan Campus Library. Black in Latin America: Mexico, part of a PBS documentary series, screened on February 16, and Slave Island: New York’s Hidden History, which deals with the history of an eighteenth-century African American burial ground unearthed during excavation in downtown Manhattan, screened on February 9.

The Mid-Valley Campus Library is also a program host. Freedom Riders, a documentary about a courageous band of civil rights activists who challenged segregation in the South, will screen at the library at noon on February 29. Sisters of Selma: Bearing Witness for Change, which screened on February 15, tells the story of a group of nuns who joined the battle for civil rights in Selma, Alabama.

In addition, the college’s Library Art Gallery displayed a collection of posters commemorating the significant leaders and events of the civil rights movement. 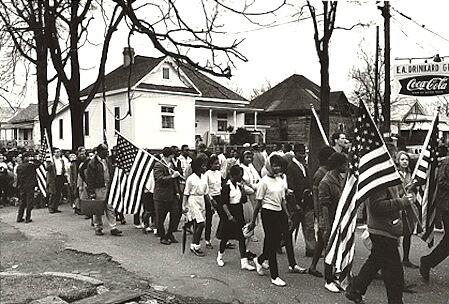 Participants, some carrying American flags, marching in the civil rights march from Selma to Montgomery, Alabama in 1965. Photo by Peter Pettus. Library of Congress Prints and Photographs Division. 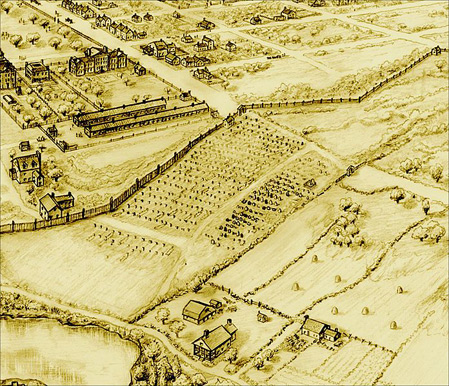