Celebrating the Nineteenth Amendment with Citizens at Last

The ratification of the Nineteenth Amendment in 1920 ended the woman suffrage movement and represented a great victory for American women in their quest for the right to vote as U.S. citizens. Texas was the first state in the South to ratify the Nineteenth Amendment, a landmark moment for all who took place in the struggle for representation. Citizens at Last: The Woman Suffrage Movement in Texas, a Humanities Texas traveling exhibition, focuses on the twenty-seven-year campaign for woman suffrage in Texas with panel topics covering the national beginnings of the movement, early Texas leaders, anti-suffrage sentiments, efforts to amend the Texas Constitution, primary suffrage, and, finally, the ratification of the Nineteenth Amendment.

This year marks the one-hundredth anniversary of that momentous event, and organizations across the state are celebrating by hosting Citizens at Last in their communities. Check out the highlight box on the right for a list of the venues scheduled to host the exhibitions later this year. Kicking off the centennial in late December and early January, Citizens at Last traveled to Odessa and El Paso, where the Girl Scouts of the Desert Southwest featured the display as part of the Texas 2020 Women's Right to Vote Centennial Girl Scout Patch Program.

The "Women Vote" patch program encourages Girl Scouts of all levels to learn about the history of voting rights and the importance of casting one's ballot. In particular, the girls focused on the passage of the Nineteenth Amendment and how it relates to their lives one-hundred years later. With the help of the archival photographs, newspaper clippings, cartoons, cards, and narrative text included the exhibition, the Girl Scouts learned about famous Texan suffragettes and their battle to gain the right to vote. They then discussed ways in which they could make a difference in their own communities by acting on issues about which they are passionate.

Melissa Wardy, Chief Development Officer of the Girl Scouts of the Desert Southwest, stated, "The girls easily grasped the idea that voting equals your voice, and we discussed why both the dates of 1920 and 1965 were important for women's voting rights."

The scouts considered other topics including how women before them paved the way for them to use their voices today, how to run for office, what their campaign positions would be, and how to enact positive change through legislation. The scouts reportedly had big ideas on how they could help make the world a better place through civic engagement. Wardy added, "The fifth graders were stalwarts for equal pay!"

Wardy also noted, "Of the seventy-five girls I directly observed using this exhibition and doing the curriculum for the patch, not once did their conversations slip away from civil discourse, become partisan, or go off the rails. I think grown-ups have a lot to learn from girls!"

The scouts' other related activities included creating voter engagement posters that now hang in the Girl Scout Council offices. Visitors are welcomed with messages that say, “Vote for a brighter future,” “You can make the world a better place," and "You have a voice.”

Citizens at Last: The Woman Suffrage Movement in Texas is based on the book of the same name and on an earlier exhibition of the same name by the Woman's Collection at Texas Woman's University Library. If you are interested in bringing Citizens at Last or a different exhibition to your community, visit the Exhibitions section of our website or contact us at exhibitions@humanitiestexas.org. 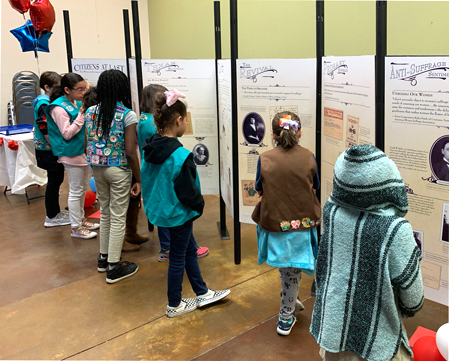 The Girl Scouts of the Desert Southwest view the Humanities Texas traveling exhibition Citizens at Last: The Woman Suffrage Movement in Texas as part of their Texas 2020 Women's Right to Vote Centennial Girl Scout Patch Program.

Citizens at Last on Display

Find Citizens at Last: The Woman Suffrage Movement in Texas on display at a venue near you: