That Was the Year That Was

On June 15, 1964, Senator Everett Dirksen delivered the following remarks about his year working on civil rights legislation in a segment titled "That Was the Year That Was" as part of his weekly series, “Your Senator Reports.” The transcript of this broadcast is courtesy The Dirksen Congressional Center.

In a way, I sort of pilfer the subject for today. Perhaps paraphrase would be a better word, but as was announced, I want to visit with you a little on "that was the year that was." Now you have seen that popular and highly diverting program, That Was the Week That Was. But I want to talk about "that was the year that was," and this will probably be the last of my observations on this general subject of civil rights. So let's go back to June 1963. That was a year ago. To be exact, on the 5th of June and also on the 4th, my party, the Republican Party, held a conference for the purpose of considering a little statement of principles with respect to civil rights. I wrote out what I thought was a good statement. Then we had two sessions, and, of course, they began to take out a word, take out a phrase, and then they put it back. This continued for two whole days. But when we got through, virtually all the words were put back, and all of the phrases were put back so that as I wrote it one night on my own portable typewriter, it stood up pretty well. That was a year ago this month.

Then began the conferences at the White House in early June. And then came the conference of White House and the Justice officials and leaders on both sides in my Capitol office, because the President's Message on Civil Rights together with the bill was sent to both branches of the Congress. As a result, we referred the whole bill in the Senate to the Judiciary Committee. We also took out Title II, which deals with the food establishments in hotels and motels and so forth and sent that package to Judiciary. Then we sent Title II standing by itself to the Senate Commerce Committee. On the House side, they sent the bill as such to the House Judiciary Committee. So, after a long period of hassling, at long last a civil rights bill was before both branches of the Congress. Well, that is the way we disposed of it for the moment.

And then the hearings began in the Senate Judiciary Committee. There were nine days of hearings. There was one witness and one quizzer. The witness was the Attorney General. The only person who got a chance to ask questions was the distinguished senator from North Carolina, Senator Ervin, who, in his own right, is a very distinguished lawyer and former Chief Justice of the Supreme Court of his state. But we were making no progress. It was suggested then that the bill be sent to a Subcommittee. That was done, and there it languished. Nothing more happened. And after a time it was decided by the Administration leaders in the Senate that they might just as well wait for the House Bill and for House action. So there we stood.

So if we go back to the House, they had a comparable experience. They took testimony before a subcommittee of the House Judiciary Committee. Then they had a good many sessions of the full Committee. They could accomplish nothing. They just stood still. So they called in the Attorney General. They had two, maybe three full days of conferences with him, and out of it there emerged a bill which the Committee voted and they then went to the Rules Committee, which is really the traffic cop that gives you a rule on whether you can get a bill up in the House or not, and they got a rule for consideration of the bill. Then, of course, the discussion began. It took quite a while. I think they had sixty-four hours of debate. 155 amendments were offered. Thirty-four were adopted. And on the tenth of February the House of Representatives, by a top heavy vote, 290 to 130, passed the bill in the form in which it finally came over. So the House finished its labors. Sixty-five percent of all of the members supported the Bill, and then it was the Senate's turn. So then began the drive. Well, putting all these amendments into a bill, making sure that they are in the right page and that they are accurately drawn and they conform to the record, it takes a little time. So they had to use seven days before they could send the bill over in its revised form. That was the seventeenth of February, and then it was our turn.

Now you see, under our rules, you cannot just come in and say, Mr. President, I offer a bill, and have it considered. There has to be a motion to take up the bill. That is the first motion, and that is the barricade where the trouble begins, because that motion to take up before there was ever a bill before the Senate was debated roundly, early and later with long speeches, for sixteen days. And at the end of that time, we got a vote. And the vote was sixty-seven to seventeen. You see, that is roughly four to one that the Senate should consider a civil rights bill. And that brought the House bill before us for the first time. Then began the long grind. Everybody organized. I appointed seven captains on my side. Senator Humphrey appointed an equal number of captains on his side. The southern group had their captain of the day, and he had his lieutenant. So you see, everybody had his battle station, and it was almost organized like a military campaign. But at last the bill was before us and the discussions began. It continued on and on and on and there was no way of going forward or going backward or getting off of the hook, and I am afraid the public image of the Senate was not being improved as a result of this stalemate, because it was an absolute stalemate.

It is at that point that I began to think some about some conferences, because we had done our spade work together with an excellent staff, I think we had prepared sevety amendments to the House bill. Over a period of weeks, these were presented to my own Policy Committee for discussion and for guidance. But,that still didn't do, because if you are going to get amendments to the bill, sooner or later you had to get clearance on the part of everybody who had some interest in the bill. That meant not only the Administration leaders in the Senate, but it meant the Department of Justice, and it meant my own Party and its leaders as well. As a result of all this, I suggested some conferences in my office. The Attorney General was there. The Deputy Attorney General and the head of the Civil Rights Division in the Department of Justice, the Republican leadership, the Democratic leadership, and the young lawyers who constitute the staff on both sides of the aisle. So after five days, the staffs then, of course, have conferences of their own to refine language and to interpret so that we would make no mistakes. It was further agreed that after all of this work was done, we would then go before our respective party conferences. The Party Conference consists of all the members of your party. As a general thing, you take no votes. These are more or less for discussion purposes and to get a feeling and to get a consensus if you can. But after all of this spade work was done, we were then ready to put the bill together.

It was agreed that the substitute bill should be introduced by the Majority Leader Mr. Mansfield; myself; Mr. Kuchel of California, the deputy Minority Leader; and Mr. Humphrey of Minnesota, the deputy Majority Leader. And so the substitute was then ready for any amendment by any member of the Senate who had any amendments to propose. While this was going on, amendments galore were being proposed. At first it didn't look too bad, but before we knew it, we got up to 550 amendments. Just think of discussion on that many amendments. I would have been interminable. And so we had to think seriously about getting a limitation on debate. It was agreed, then, that if we provided separate votes on three particular amendments, in which notably members of my own Party were interested, we could then proceed with the cloture petition. When you file that petition to limit debate, it has to lay over for one calendar day, and then you can get a vote on it. In fact, the vote is mandatory. And that vote finally came. It required, if everybody was present, sixty-seven votes.

On that day, on that Wednesday, when we voted on the cloture petition, every member was present, including Senator Engle of California who, as a result of a stroke, lost his speech, but he could indicate to the reading clerk how he would vote. And when they got to the name of Senator Williams of Delaware that was the sixty-seventh vote, and you could feel an audible sigh, and somehow an end to suspense. People sense and feel these things and, from early in the morning on, there was a constant stream of people to the Capitol, because they knew what was going to happen on that day. So there we were. Cloture invoked, a limitation on debate. From then on it was a case of taking up the amendments that members felt should be called up and disposing of them until finally you got to the end of the furrow. So you see, the furrow began in the first week of June of 1963 and about terminated in June of 1964. So I think, perhaps, when the history books deal with this matter, they could just as well use this title that I have used for these casual observations today. That was the year that was—from June 1963 to June 1964, as we dealt with the whole package of civil rights and, for the first time in the history of the Senate, invoked a limitation on debate by Senators in the civil rights fold. So I end where I began, truly that was the year that was. Thank you. 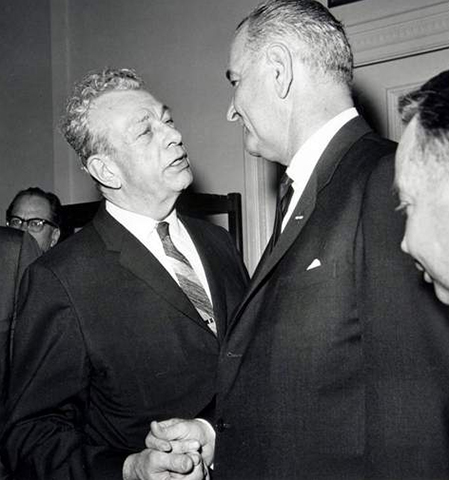