Former Rhode Island Senator Claiborne Pell, who authored the legislation creating the National Endowment for the Humanities (NEH), passed away on January 1, 2009. He had suffered from Parkinson's disease for many years.

Pell was first elected to the Senate in 1960 and served six terms, until his retirement in 1997. In 1963, he oversaw hearings on legislation that would lead to the National Foundation on the Arts and the Humanities Act of 1965. Pell opened those hearings with a stirring statement that indicated how significant he felt the legislation to be: "I believe that this cause and its implementation has a worldwide application; for as our cultural life is enhanced and strengthened, so does it project itself into the world beyond our shores. . . . Let us apply renewed energies to the very concept we seek to advance: a true renaissance—the reawakening, the quickening, and above all, the unstunted growth of our cultural vitality." Pell later drafted the bill and sponsored it before Congress.

The 1965 Act is only one of Pell's legacies. He is best known for the Basic Educational Opportunity Grant, which passed in 1972 and provides need-based scholarships from the U.S. Department of Education to low-income undergraduate students. In 1980, the awards were renamed "Pell Grants." He was also a major proponent of the legislation that led to Amtrak and a treaty that banned nuclear weapons on the ocean floor.

Before becoming a senator, Pell served in other public positions. He joined the U.S. Coast Guard after graduating from Princeton and Columbia and later remained in the Coast Guard Reserves. He also worked for the State Department and in the foreign service in Czechoslovakia, Italy, and Washington.

Pell died peacefully surrounded by his family at his home in Rhode Island. He was 90. 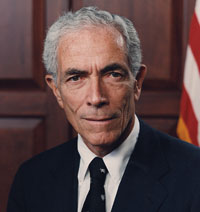 Former Senator Claiborne Pell drafted the bill that founded the National Endowments for the Arts and the Humanities. Photo courtesy of the Senate Historical Office.