Many lawyers have an appreciation of the U.S. Constitution that extends well beyond their professional requirements. Just as clergy contemplate scriptures not merely for intellectual understanding, attorneys often study our nation’s founding document and its history to gain inspiration as well as insight. My father, Robert L. Gillette, certainly did. A Baytown attorney for forty years, he embraced the Constitution not only as the basis for our government and laws, but also as a guide for daily civic engagement. Since Dad’s death last year, my sister Jane Riggs has been sorting through his papers. She recently discovered a remarkable 1952 speech in which he articulated his faith in the Constitution and the practice of citizenship upon which it depends. Although his audience lived in a very different world than today's, his counsel, as always, is worth our consideration.

“We Owe a Debt”
Speech by Robert L. Gillette to the First Christian Church Fellowship, January 23, 1952

This evening a group of men who enjoy being together is having a meeting. We had a splendid meal, and we guests are grateful to those who invited us. You members owe a debt of gratitude to the serving committee and I am sure to your officers and your pastor.

Do you owe a debt to anyone else? Food is paid for; gas bill is paid, as is the light bill. Building committee—we could thank them but no one else.

Don’t forget, you did not have to get permission to hold this meeting. You decided where and when it would be, and each member brought a guest of his choice. You may discuss any subject you desire and when you leave, you have the right to say in a loud voice, “That was a lousy speech.” You will go home in fine automobiles to good homes and go to bed without fear of being awakened by anyone (other than your wife) to demand to know where you have been.

These things that we do are so natural that we do them without thinking and without being truly grateful for the privilege, or let us say the right, but if we will stop to consider for a minute, I am sure you will all agree that we owe a debt. Yes, we owe a debt to those who made this possible.

We are indebted to those men who had the wisdom and courage to formulate such a government of laws giving us these rights, which we so often take for granted, but which are so dear, and we owe a debt to the thousands of men who have given their lives so that these rights may continue to be ours.

Last summer when in Washington, I had the honor to visit the Arlington National Cemetery. Walking down the many, many rows of small white markers, I felt so humble. Not because it was a cemetery, but because I was forcefully reminded that these many graves mark just a small portion of men who have given their lives for me—yes, given their lives that I may live and raise a family in a fine country. These men bought my liberty. The price was high. How can I repay this debt?

This debt can best be paid by perpetuating this government for which they gave their lives. And how can this best be done? By our doing the following and I mean doing, not thinking or talking of doing. 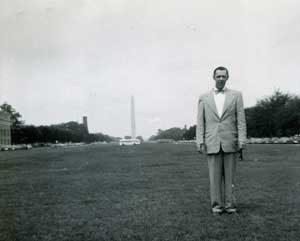 Graves at the Arlington National Cemetery. 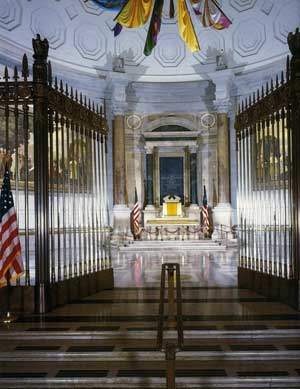 The rotunda of the National Archives.