Working at the National Archives had its privileges. Among them was the opportunity to give visitors from Texas early morning tours of the building before its doors opened to the public. Our first stop on these tours was the Rotunda, where we watched the Charters of Freedom emerge from a vault deep beneath the floor. As a guard activated the aging mechanism, which has since been replaced, we peered down through the thick protective glass to see the massive steel and concrete doors slowly open. Next a large scissor-jack assembly raised the documents upward and into their marble altar for public view. And then there they were before us: the handwritten Declaration of Independence, Constitution, and Bill of Rights!

Standing so close to the charters invariably evoked powerful emotions. The same sense of awe and reverence that my guests experienced also touched me. The proximity of the grand documents that have defined our democracy brought forth a feeling of immense pride. Although I participated in this routine hundreds of times, it was always special.

These occasions also inspired moments of reflection. I often wondered what the Founders would think of their precepts’ evolution over two centuries. How well have we understood the experiences, concerns, and aspirations that inspired the charters’ creation? The founders could hardly have anticipated the twenty-first-century technologies and global complexities that have influenced modern interpretations. Ever since the Constitution’s adoption, its provisions have been debated before the courts, with litigants offering conflicting explanations of the framers’ original intent. The fact that the document itself was a fabric of compromise, interweaving threads of competing perspectives, has facilitated these divergent interpretations.

Yet there is one self-evident truth implicit in the Constitution that cannot be debated: that an informed, educated electorate is critical to the survival of our representative democracy. At the core of this vital civic education should be an understanding of the nation’s founding documents and the experiences that inspired and amended them. The mission of the National Endowment for the Humanities and the state humanities councils is ultimately to strengthen democracy by advancing our civic education.

Humanities Texas enhances public consciousness of the Constitution in our grants, our public programs, and in our traveling exhibitions. In celebration of Constitution Day, The Blessings Of Liberty: The U.S. Constitution is on display at the Robert R. Muntz Library at The University of Texas at Tyler until October 17 to be followed by the newly refurbished exhibition The Bill of Rights from October 31 to November 28. South Texas College in McAllen will host The Blessings of Liberty throughout November. In 2009 we plan to collaborate with the College of Liberal Arts at The University of Texas at Austin, the Lyndon Baines Johnson Library and Museum, and other major academic and cultural institutions in hosting teacher enrichment programs on the U.S. Constitution.

In observance of Constitution Day (September 17), Humanities Texas features a presentation on the origin of the legislative branch by the distinguished political scientist Dr. Joseph Cooper of Johns Hopkins University. Dr. Cooper gave this lecture at the opening of our 2004 summer teacher institute on the United States Congress and American History.

The Barry Faulkner mural The Constitution can be seen in the National Archives building above the actual Constitution display. 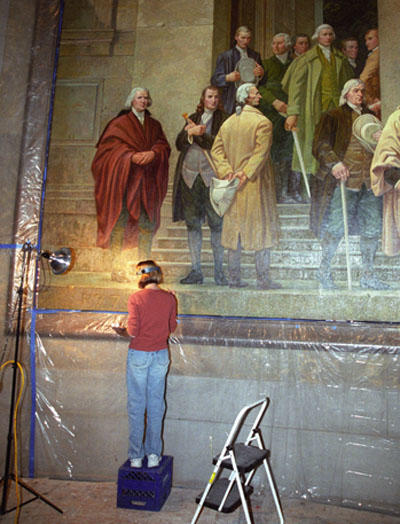 The Rotunda of the National Archives closed in summer 2001 for renovation that included the reencasement of the Charters of Freedom in a state-of-the-art housing and the restoration of the two murals by Barry Faulkner that hang above the Declaration of Independence and the Constitution. The restoration process involved taking the canvases off the walls, rolling them onto giant cylinders for safety during transport, and moving them into a warehouse where they were laid out, cleaned, and repaired. This photo shows the mural of the Constitution soon after its return to the Rotunda. For more on the restoration of the murals and the renovation of the Rotunda, visit the National Archives web site.