The Constitution in Tahoka

In 1969, in Tinker v. Des Moines Independent Community School District, the U.S. Supreme Court defined the First Amendment rights of students in American public schools. The case concerned three Des Moines students who began wearing black armbands to school in protest of the Vietnam War. The principal of the Des Moines schools banned the wearing of armbands and suspended the students until their protest ended.

In a 7–2 decision, the Court ruled in favor of the students. Justice Abe Fortas wrote in the majority opinion that "First Amendment rights . . . are available to teachers and students. It can hardly be argued that either students or teachers shed their constitutional rights to freedom of speech or expression at the schoolhouse gate." In other words, schools would need to provide a constitutionally valid rationale for restricting First Amendment Rights.

The Tinker case is still used as a benchmark for evaluating students' constitutional rights. In 1970, similar issues arose in Aguirre v. Tahoka Independent School District. The case came before U.S. District Judge Halbert O. Woodward, who was appointed by President Lyndon Johnson as federal judge for Texas's Northern District in 1968 and soon became a major figure in the desegregation of Lubbock schools.

The following excerpt is from the Honorable Royal Furgeson's discussion of major court cases related to education at our September 12, 2012, workshop on the U.S. Constitution held at the Dallas Institute of Humanities and Culture. Furgeson clerked for Judge Woodward following his service in Vietnam.

Royal Furgeson is senior U.S. district judge in the Northern District of Texas, Dallas Division. Prior to taking senior status, Judge Furgeson served in the El Paso, Midland, and San Antonio divisions of the western district of Texas. He has been a federal judge for over eighteen years. A native of Lubbock, he graduated from Texas Tech University with a BA in English and earned his law degree at The University of Texas School of Law. After law school, he served in the U.S. Army for two years, attaining the rank of captain. In addition to his ongoing district court obligations, Judge Furgeson is a panel judge on the Judicial Panel on Multidistrict Litigation, president of the Federal Judges Association, and a member of the Judicial Branch Committee of the Judicial Conference of the United States. He has also served as chair of the Judicial Resources Committee of the Judicial Conference of the United States. Effective April 2013, Judge Furgeson will assume the role of founding dean of the University of North Texas at Dallas College of Law in anticipation of the law school's opening in August 2014.

I clerked for a great judge named Judge Woodward in Lubbock, and we had a case that came out of Tahoka, Texas. I don't know if anybody knows where Tahoka, Texas, is. It's a little town. This came out shortly after Tinker, and Tinker said that kids have the right to free speech. They were wearing symbolic black armbands protesting the Vietnam War in that case. [Students] have the right to symbolic speech, and they can't be kicked out of school unless they're disrupting the educational process.

So the Tinker case came out, and the next year I was clerking for Judge Woodward. In that case, Mexican American parents had gone to the school board wanting to have the right for their kids to speak Spanish on the playgrounds. The school district said no, you can't do that, so the kids got brown armbands, put them on, and went to school in solidarity with their parents. As soon as those kids got on the school grounds with the brown armbands, they got kicked out of school. By the time the case got to Judge Woodward, every Mexican American kid in Tahoka was out of school.

The ACLU brought the case. It was brought by Thomas Jefferson Griffith, who had started practicing in Mississippi. He was a liberal Democrat, and he said by the time the fifth cross was burned in his front yard, he moved to Texas, to that bastion of liberalism, Lubbock. He was a delightful guy.

On the other side was the lawyer who represented the school district, with a wonderful Texas name, Calloway Huffaker. So those two guys did battle. Judge Woodward was channeling Justice Frankfurter. He kept saying, you know, "I don't want to run school boards. I don't want to get involved in this school."

I said, "But Judge, it's the Tinker case." He'd say, "I know, but what's going to happen to the Constitution in Tahoka, Texas, of all places?" So at any rate, I do remember at the end, Mr. Huffaker said, "Judge, if you put these kids back in school there'll be blood in the streets in Tahoka, Texas."

This was an injunction hearing. The judge said, "I haven't heard anything about blood in the streets. We will adjourn this case, and Mr. Huffaker, you can bring me the evidence tomorrow."

The next day, a little ninety-five-year-old woman came up and said she had heard from her granddaughter, who had heard from her best friend— hearsay to the twentieth [degree]—that there could be a problem if the kids went back to school. The judge said, "Thank you very much." I was thinking, "What's he going to do? Will the Constitution live in Tahoka, Texas?" He said, "Ok, I'm putting the kids back in. I grant the injunction." He got off the bench, and as he was walking past, he winked at me, like, "I knew it all along." So that's my Tinker case, which was a wonderful case. The Honorable Royal Furgeson speaking in Dallas on September 12, 2012, at a Humanities Texas teacher workshop on the U.S. Constitution. 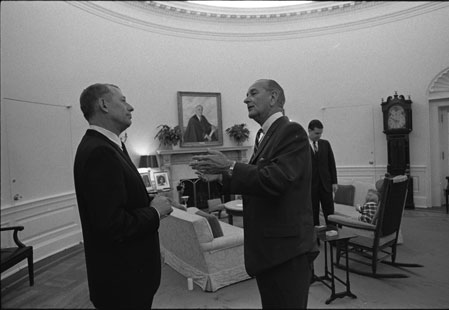 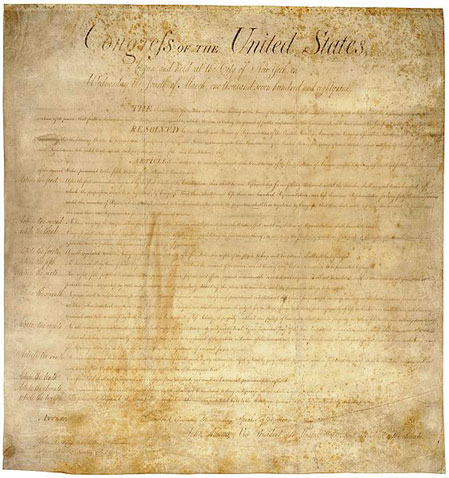 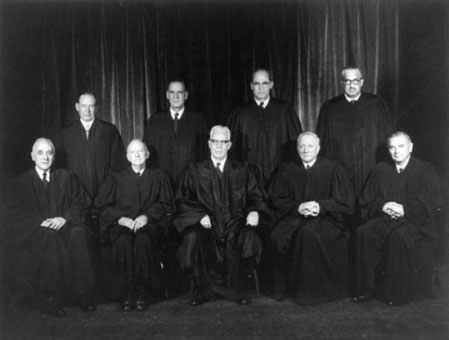 The Warren Court, ca. 1967–69. Collection of the Supreme Court of the United States. This court ruled in the Tinker case.