A Conversation with Adán Medrano

On September 29, 2021, Humanities Texas and Foodways Texas will host "A Conversation with Adán Medrano." A chef, food writer, and filmmaker, Medrano spent twenty-three years traveling and working throughout Latin America, Europe, and Asia, where he came to recognize the importance of food and how it serves as a source of identity and cultural memory. He returned to the U.S. in 2010 to focus on the culinary traditions of the Mexican American community of Texas: its history, recipes, and how this singular cuisine is showing the way toward a better understanding of what it means to be "American." Moderated by journalist and cultural anthropologist Cecilia Ballí, "A Conversation with Adán Medrano" will touch on Medrano's personal journey with food as well as themes explored in his recent documentary, Truly Texas Mexican. The conversation will be followed by a Q&A session with the audience.

This live, virtual event is free and open to the public. Please register online to attend. You will receive a Zoom link via email prior to the virtual event.

Adán Medrano is a chef, food writer, and filmmaker. He is the author of Truly Texas Mexican: A Native Culinary Heritage in Recipes and Don't Count the Tortillas: The Art of Texas Mexican Cooking, both published by Texas Tech University Press.

A graduate of the Culinary Institute of America, Medrano's professional work in restaurant kitchens includes fine dining at Restaurant Ten Bogaerde in Belgium and volunteering as chef of Houston's Casa Juan Diego, a shelter for homeless persons. He has lectured about food and culture at academic institutions and showcased his recipes at gatherings across the country.

Medrano is also an award-winning filmmaker and holds a master of arts degree in radio, television, and film from The University of Texas at Austin. In 1976, he founded the San Antonio CineFestival, the first and now longest-running Latino film festival in the United States. His recent documentary feature film, Truly Texas Mexican, won Best Documentary at the New York Independent Cinema Awards. He has provided consulting services and created media productions for the White House, the Vatican, and the National Conference Of Catholic Bishops, among others, both in the U.S. and internationally. 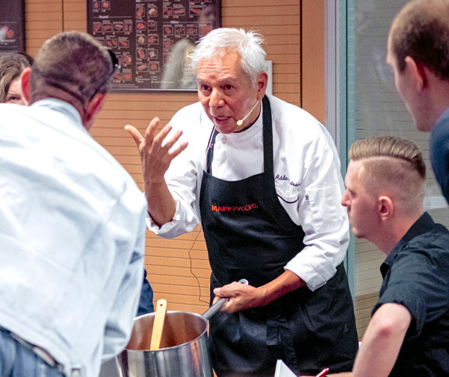 Adán Medrano gives a cooking demonstration for restaurant and hotel chefs in Moscow, 2019.