A Conversation on Texas Taceaux

On March 25, 2021, join Humanities Texas and Foodways Texas for "A Conversation on Texas Taceaux," featuring Texas Monthly Taco Editor José R. Ralat in dialogue with Jason and Starr Harry, owners of EaDeaux’s Cajun Cocina, a Houston-based Cajun/Tex-Mex taco truck. This virtual program will explore the role of the taco in representing and connecting the diverse, ever-evolving cultures of our state. Ralat will take viewers on a brief taco tour of Texas, highlighting how different regions put their own unique spin on tortillas, fillings, and salsas. He and the Harrys will then discuss how EaDeaux’s hybrid cuisine exemplifies the taco’s ability to bring people and cultures together. The conversation will be followed by a Q&A session with the audience.

This live, virtual event is free and open to the public. Please register online to attend. You will receive a Zoom link via email prior to the virtual event.

This program is made possible with funding from the National Endowment for the Humanities in support of the agency’s Night of Ideas 2021 partnership with the Cultural Services division of the French Embassy in the United States.

José R. Ralat is Texas Monthly taco editor and the author of American Tacos: A History and Guide, published by University of Texas Press in April 2020. Sought after for his authoritative and expansive knowledge on the local, regional, and national taco scenes, he has been featured by The New Yorker, Remezcla, Telemundo, and the James Beard Award-winning First We Feast website. The New York Times has called Ralat "an expert on the folklore of the taco."

About Jason and Starr Harry

Jason and Starr Harry are the owners of EaDeaux's Cajun Cocina food truck in Houston. EaDeaux's provides a Cajun Tex-Mex menu, which blends food from their respective origins—Jason from South Louisiana and Starr from Phoenix, Arizona—with the food culture of Houston. The food truck is a spin-off of their car wash business, EaDo Hand Car Wash, located in East Downtown Houston. EaDeaux’s originated as an attempt to ensure that hungry car wash customers were satisfied with their overall customer service experience but soon became the more popular business due to the mobility of the food truck and its creative food offerings, such as gumbo tacos and boudin nachos. Jason and Starr live in Houston's Third Ward with their five-month-old daughter, Jacie Starr, and their eleven-year-old Yorkipoo, Bear. 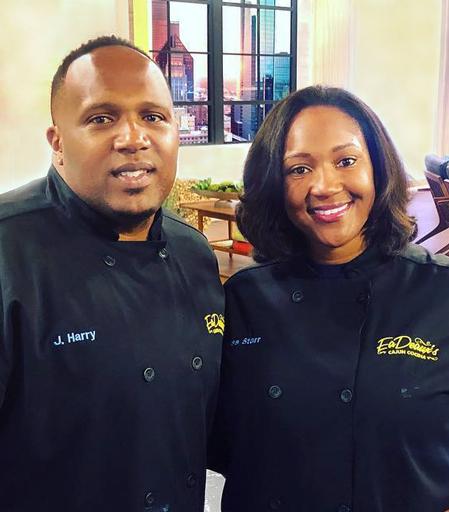