Daina Ramey Berry on the Life and Work of Frederick Douglass

Earlier this month at our "American Writing on the Civil War" teacher workshop, Daina Ramey Berry, associate professor of history at The University of Texas at Austin, shared these insights on the life and work of Frederick Douglass.

I'd like to present a different perspective on Frederick Douglass. A lot of us see him as an orator, but he was also a father, a husband, and a grandfather. I think it is really important to think about historical figures as people—as regular, ordinary figures. It's helpful to know a little bit about them as human beings, not just what they're known for historically.

A decade after his escape from slavery, Frederick Douglass sent a letter to his former owner. In this document, he lamented that slavery was a condition that he dreaded more than death. Providing more detail, he recalled, "the chain, the gag, the bloody whip, the deathlike bloom overshadowing the broken spirit of the fettered bondman, the appalling liability of his being torn away from his wife and children, and sold like a beast in the market." These are Douglass's words describing what it was like to be an enslaved person. Within these recollections, Douglass maintained a tone devoid of anger or revenge. You'll find that as a theme in some of his writings. The letter closes as follows: "I am your fellow man, but not your slave." We rarely get this perspective, where we see or read slaves responding to their owners about their experience with enslavement. It's a unique angle. What would an enslaved person want to say to their owner ten years after they're free, after they escaped to freedom? What kind of questions and statements do you think they would have?

But as I mentioned, today I want to talk about Frederick Douglass's life and his writings from enslavement well into his years of freedom. I'll begin with a brief overview of his family life, and then I'll shift to his writing and rhetoric through an exploration of some of the important passages from a diverse body of his written work. These passages reflect four major turning points in Douglass's life: 1) the brutal whipping of his Aunt Hester, 2) the physical altercation with [Edward] Covey, 3) the gift of literacy, and 4) the reaction Douglass had to receiving freedom in the North.

We know that Frederick Douglass was born Frederick Augustus Washington Bailey in 1818 in Talbot County, Maryland. We also know that he was the offspring of a white man whom he believed was his enslaver, Aaron Anthony. This fact is often questioned. His mother was an enslaved woman named Harriet Bailey. Douglass had at least three older siblings: Perry, Sarah, and Eliza. He also had two younger sisters, Kitty and Arianna.

His seventy-seven years of life were very remarkable because as a gentleman who was born enslaved, he learned to read and write, he escaped slavery, then he went on to become a public speaker, an editor of newspapers, a recruiter for the Union Army, and finally the president of the Freedmen's Bureau Bank and a minister and consul general to Haiti. He had a lot of accomplishments. Even just one of those accomplishments would have been significant.

So think about that, and have your students understand that he was not just a fugitive slave. He did other things after he became free. He stayed active in the campaign to end slavery and fight for equality—not only for African Americans' rights but also women's rights as well.

In addition to studying Douglass's many political accomplishments, it's important to see and understand him as a husband, a father, and a grandfather. He was married to his first wife, Anna Murray Douglass, for forty-four years before she passed. They had several children together. His second wife was Helen Pitts Douglass, whom he married in 1884 after his first wife passed. She was a cousin to presidents John and John Quincy Adams and was Douglass's personal secretary.

He didn't talk about his first wife [Anna Murray Douglass] much in his writings. He was very private about their relationship. But he does say that she was his "helpmeet," which is a biblical reference. The two of them bore five children together. In teaching students, I like to emphasize that he had a private life. One that was difficult to maintain because he traveled so much speaking against slavery once he became free.

Despite his many absences, Douglass was very active in his children's education. He actually went to their school and met with their teachers, lobbied for their principals to include certain aspects of African American [history in the] curriculum. He wanted his children to become educated, and he held the teachers and the schools accountable. He took pride in his children's accomplishments.

In 1860 while he was away from the family on a tour, one of the many times that he was away, the family suffered the loss of his youngest child, Annie Douglass. She died a few days shy of her eleventh birthday. Apparently, from what we can tell from the family papers, this was a very, very difficult time for Douglass. He grieved and grieved, and he and his wife had a very difficult time dealing with the loss of their daughter. This death was particularly hard on Anna Murray, his wife.

In 1882, after living in New Bedford, Massachusetts, his first wife, Anna Murray, died of a stroke. It is said that Douglass went into a serious depression after her death, that he did not come out of his bedroom for a number of months. People were trying to get him to go on tours and lectures, and he just shut down for a period of time.

Two years after his first wife passed, he married his second wife. Helen Pitts was a white woman, and a lot of people had interesting things to say about that. It was a very controversial relationship. She had worked for him for a number of years.

Now shifting from his family, I'd like to discuss Douglass's writing and do an examination of the four key moments of his life that I mentioned. Let's first examine his role as a writer, publisher, and editor. Narrative of the Life of Frederick Douglass, an American Slave was his first autobiography, published in 1845. My Bondage and My Freedom was published in 1855. The Life and Times of Frederick Douglass went into a second printing. It was published in 1881 and also in 1891. Douglass was also the founder and the editor of an abolitionist newspaper, the North Star, which ran from 1847 to 1851. He wrote a lot of political commentary, which would be considered op-ed pieces today, on various topics.

He had some failures earlier on with some of the other African American newspapers, and he decided to start his own. This is what I mean by some of the political statements he made: "Right is of no sex." "Truth is of no color." "God is the father of us all," and "All are brethren." He used the paper as a platform to serve the abolitionist cause. He wanted to still help those who were enslaved, even though he had escaped slavery.

He was able to have his anti-slavery friends and supporters purchase his freedom from Thomas Auld in 1845. He was purchased for $711. That was his price. I'm now doing work on slave prices, and people always ask, "Now what does that mean? Was that a lot of money? Was that typical or was that a discount?" If we're looking at today's standards, we can go online to EH.net, which is published by the Economic History Association, and you can plug in figures at different historical moments and they'll put in calculations and allow you to know what that price is today. So today it would be approximately $21,200.

Douglass worked hand in hand with women suffragists, such as Elizabeth Cady Stanton and Susan B. Anthony. He attended the first women's rights convention in 1848, which was in Seneca Falls, New York, and he also believed in equal rights for women. That's why he wrote in the North Star that, "all that distinguishes a man as an intelligent and accountable being, is equally true of woman." He was very supportive of women's rights and women's activism. Thus, in 1866, he along with Stanton and Anthony, founded the American Equal Rights Association, which was an organization that demanded universal suffrage.

One moment I want to discuss is the beating of his Aunt Hester. He talks about this beating in all three of his autobiographies. This was a very graphic scene where his owner, Aaron Anthony, beat his Aunt Hester, and it represents, I think, one of the major turning points in his life. He has a very graphic description in My Bondage and My Freedom, where he devotes three full pages to this episode. Apparently his aunt was not allowed to visit the gentleman that she had feelings for. This gentleman was named Ned Roberts, and her owner caught her—she had snuck out to go visit him. And so after a night of visiting him, the owner brought her back, and on her return he tied her up, cursed her, and beat her, and Frederick Douglass witnessed this beating. He hid in a closet "until the bloody transaction was over." So you have to think about how that might affect him psychologically, emotionally, to see a loved one beaten this way. So these are turning points in his life that had an impact on some of the things that he said when he went and spoke publicly about slavery.

Another moment was fighting with Edward Covey. The context was that he was hired out to this overseer, [Covey,] who was known for being very, very brutal, and for the first time he fights back. Douglass says that this was the last time that he was whipped, and he'll never be whipped again.

I want to talk briefly about Douglass's fourth turning point, which is reaching freedom in New York. He had to spend some time in hiding after he became free because he was a fugitive. This was before he was able to get anti-slavery activists to help purchase his freedom. He writes [in Narrative of the Life of Frederick Douglass]: "The wretchedness of slavery, and the blessedness of freedom, were perpetually before me. It was life and death with me." Look at the language. He's saying that the enslaved person died, and he's now been reborn into this free person. "But I remained firm, and according to my resolution, on the third day of September, 1838, I left my chains, and succeeded in reaching New York without the slightest interruption of any kind. How I did so, what means I adopted, what direction I traveled, and by what mode of conveyance, I must leave unexplained for reasons before mentioned."

He can't disclose how that happened, particularly because he's still very, very vulnerable. This is the moment that he became free. 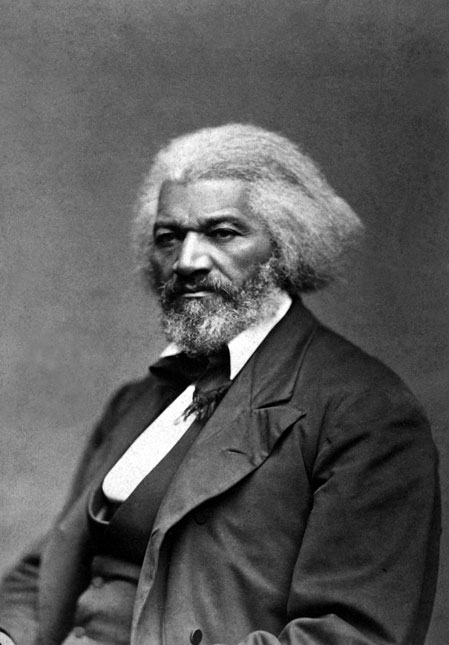 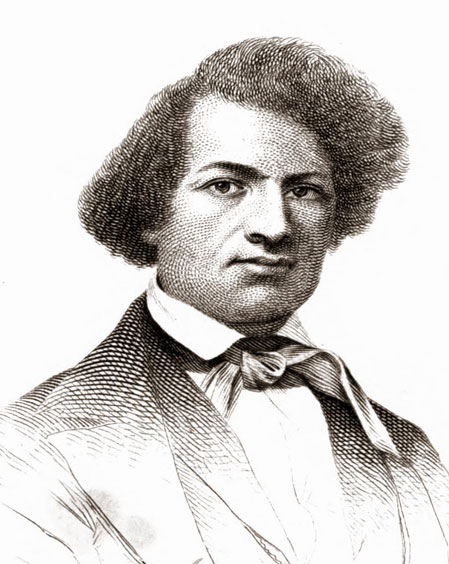 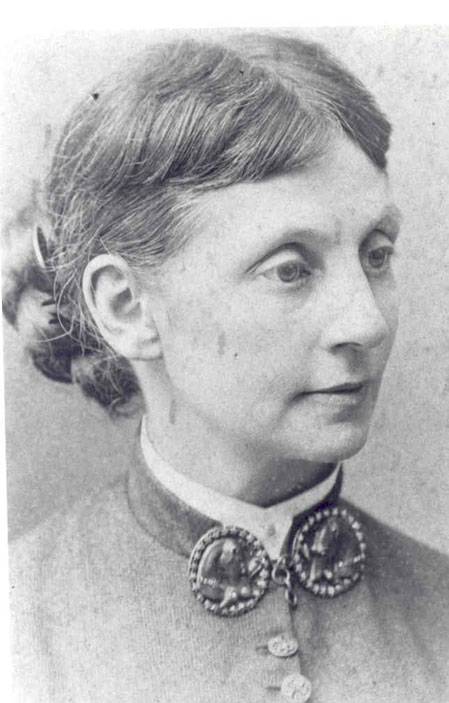 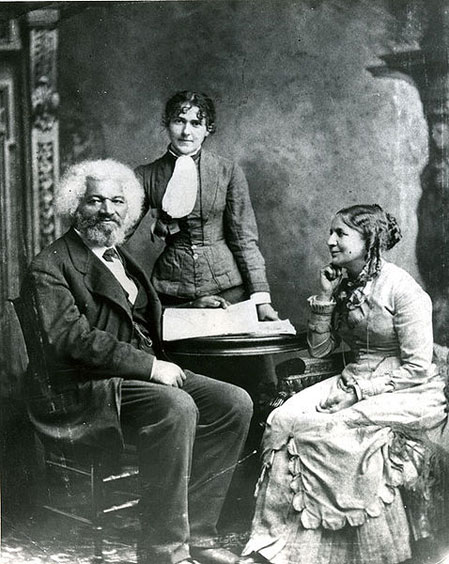 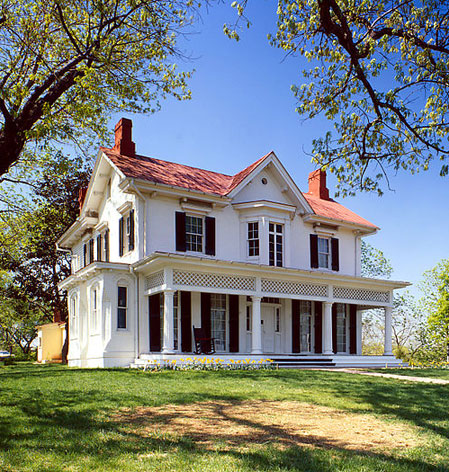 Cedar Hill, the house in Washington, DC, where Douglass lived from 1877 until his death in 1895. Photo by Walter Smalling. Library of Congress Prints and Photographs Division.