Demolition Begins at the Byrne-Reed House

Now that we have moved into temporary office space in south Austin, we are thrilled to begin the major phase of restoration for the historic Byrne-Reed House. On August 24, the City of Austin’s Historic Landmark Commission voted in favor of Historic Landmark status for the house upon completion of the project. Demolition began on September 28. Each day, more of the stucco shell encasing the building disappears.

As workers strip away the stucco, numerous historic window openings emerge, as well as original brick, much of which was painted white, as well as the beautiful cornice crowning the building.

This photo shows a historic window frame that emerged from beneath the stucco shell:

The photo below depicts stucco removal on the northwest facade. The metal trusses seen in the photo are the remnants of the far west column on the north facade facing 15th St. These columns, which were added in the 1970s, are decorative rather than structural and will be completely removed.

The photo below shows columns being demolished on the north facade.

More photos of stucco removal appear below. All photos are by Humanities Texas.

We've also discovered many exciting features during interior demolition, like this fireplace:

We originally thought that the entry doors to the dining room from the gallery were traditional double doors that swing on pin hinges, or possibly double French doors. However with further demolition, new evidence shows that these doors might have originally been pocket doors. An overhead track and pocket space in the walls were recently discovered. Pocket doors were popular in the early twentieth century, especially for libraries, dining rooms, and sitting rooms.

As drywall was removed in a first-floor room, we discovered historic window frames.

In addition to restoring the house's exterior architecture, whose style may be described as "Texas eclectic," we plan to restore as much of the original first floor plan as possible. The versatile public space on the first floor will include a 600-square-foot meeting room with seating for groups of seventy-five or more and galleries in which, for the first time, Humanities Texas can host on-site programs and provide a venue for other organizations' regular events. Staff offices will be housed on the upper floors.

Humanities Texas is proud to take part in preserving Austin's architectural heritage. To learn more about the Byrne-Reed House, visit its page on our website. 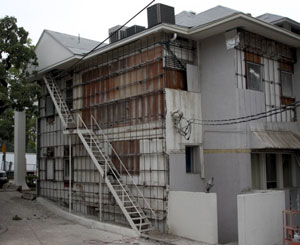 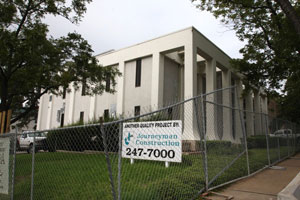 The Byrne-Reed House is now a construction site! Photo by Humanities Texas. 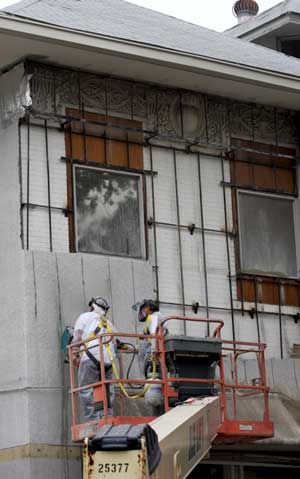 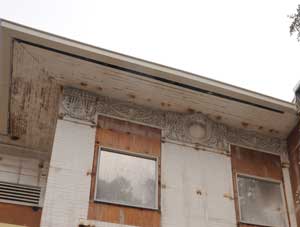 Another view of the decorative cornice. Photo by Humanities Texas. 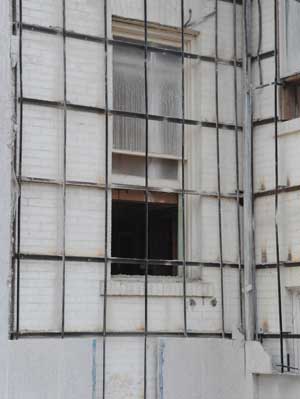 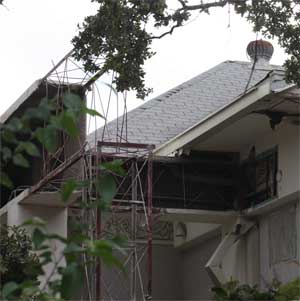 Restoration and column removal on the northwest facade. Photo by Humanities Texas. Workers removing a column on the northwest facade. Photo by Humanities Texas. Columns being demolished on the north facade. Photo by Humanities Texas. 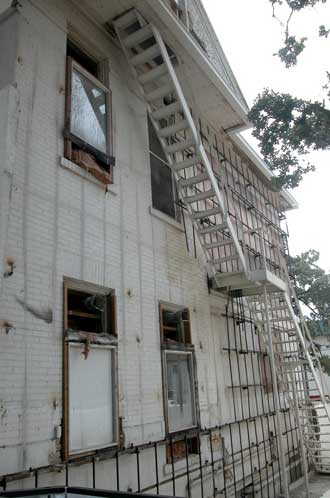 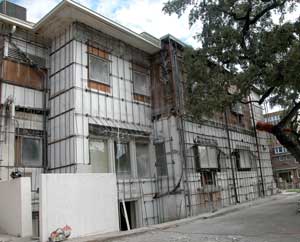 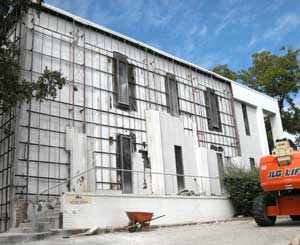 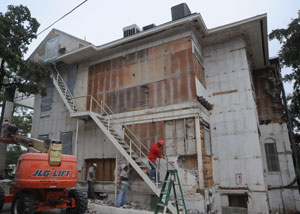 Fireplace in the Byrne-Reed House. Photo by Humanities Texas. 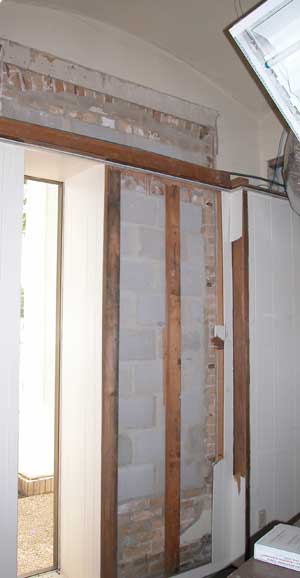