Beginning November 1, thousands of people throughout the Americas will participate in Day of the Dead (Día de los Muertos) celebrations. Manuel F. Medrano, professor of history at The University of Texas Rio Grande Valley and Humanities Texas board member, explores the many marvelous and macabre ways in which the living honor the dead at this special time of year. A multimedia presentation of this essay is made available online by the Los del Valle Oral History Project.

Through the morning mist, they come to my grave—my friends, my family, those who remember me, those who respect me. They build an altar and fill it with gifts, food, and memories. They decorate my resting place with beautiful cempasúchitl (marigolds). They celebrate me like I celebrated my family before. It is our tradition; it is what we believe connects those who are here with those who are gone.

I live where the dusk meets the dawn and the heavens meet the underworld. Crossbones and skulls surround me as life and afterlife become one. I am the ghost of the departed, and I come to visit those who will die. My roots are in two worlds and in two cultures. Pagans have praised me, popes have proclaimed me, and shamans have exalted me; few have forgotten me. I am incomparable; I am inevitable; I am inescapable; I am the Day of the Dead.

There are those who believe that the fall reunites the living and the dead. It has always been that way. Many years ago in the Old World, as October ended, the Celtic Festival of Samhain marked the beginning of the barren time, a time of gloom. As the nights outlived the days, the ghosts of the dead were said to haunt the living. In Europe, I was Christianized as All Souls Day to remember the faithful.1 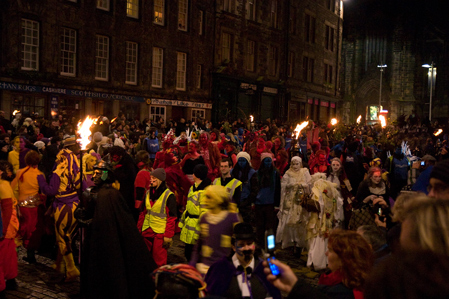 People gather in Edinburgh, Scotland, for the Samhuinn (Samhain) Fire Festival, a Celtic celebration that marks the end of the harvest season and the beginning of winter, 2008. Photo by Tom Page, CC BY-SA 2.0.

Octavio Paz, the great Mexican writer, once wrote that the Mexican knows death and does not fear it. Paz writes that the Mexican "jokes about it, caresses it; it is one of [their] favorite toys and most steadfast love."2

In the New World, my Maya, Toltec, Purépecha, and Aztec traditions have survived nearly three millennia. In their pantheons and rituals, death held a significant place. At times, the skulls of their dead ancestors were publicly displayed, symbolizing the duality of death and rebirth "as life and death were believed to exist in dynamic and complementary opposition."3

One Aztec muerto tradition included a month-long August celebration presided over by the goddess Mictecacihuatl, the Lady of the Dead. It included the practice of making bread in the shape of a person, possibly the origin of today's pan de muerto. The Aztecs also considered it a blessing to die in battle, by human sacrifice, or when giving birth because these assured the victims a desirable destination in the afterlife.

In Mexico, the Day of the Dead is observed by a variety of regional customs fused together by timeless commonalities. These include visits to family cemeteries, preparation of favorite foods for the dead, offerings on commemorative altars, and, at times, fireworks. Mixquic, once a farming island in the Aztec capital of Tenochtitlán, has retained a rural village ambiance and its indigenous roots. The area takes on a busy and festive air in the final days of October as merchants set up street stands to sell their wares for me. In the cemetery, family burial plots are carefully cleaned and decorated with my favorite earthly delights. Relatives gather at family tombs to mourn the loss of loved ones with la Llorada (the weeping). Later, when darkness arrives, the glow of thousands of candles (la Alumbrada) illuminates the way. At midnight, my soul returns to my other world with the mournful tolling of bells and is remembered with a recitation of the Rosary.4 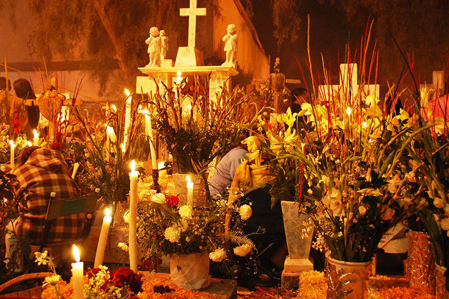 The souls of my children are believed to return on November 1, with my adult spirits following on November 2. Plans for the festival are made throughout the year, including gathering items to be offered to the dead. Wealthier families build altars in their homes, but most simply visit the cemeteries where their loved ones are buried and decorate their graves with ofrendas or offerings. These include wreaths of orange marigolds referred to as Flor de Muerto in Spanish and zempoalxochitl in Nahuatl. They are thought to attract the souls of the dead toward their offerings. Toys are brought for dead children (los angelitos or little angels) and bottles of tequila, mescal, pulque, or atole (corn gruel) for adults.

On my grave, families place trinkets and my favorite candies such as dulce de calabaza (pumpkin candy) and leche quemada (scorched milk). Sometimes mariachis are brought to perform my favorite songs. Ofrendas are also put in homes, usually with foods such as sugar skulls and platters of rice, beans, or chicken in mole sauce. The ofrendas are left in the homes as a welcoming gesture for me. Because some people believe that my spirit devours the spirit of the food, the hosts eat the food from the ofrendas, thinking it lacks nutritional value. Pillows and blankets are left out so that I can rest after a long journey.

Altars usually have the Christian cross, statues or images of the Blessed Virgin, or photographs of me. My family spends time around the altar telling stories of those that are gone. In Mizquic and Pátzcuaro, families spend all night beside the graves of their relatives.5 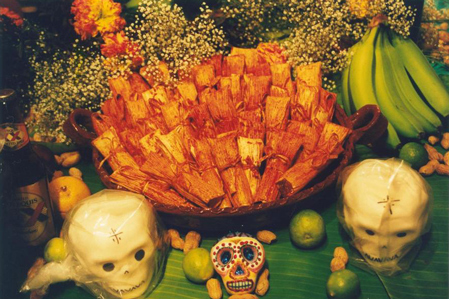 A Day of the Dead ofrenda to welcome the souls of loved ones, 2000. University of North Texas Libraries, The Portal to Texas History, crediting Mexic-Arte Museum.

From mid-October through the first week of November, markets and shops all over Mexico are filled with special items for me. These include a variety of skeletons and other macabre toys, intricate tissue paper cutouts called papel picado, and elaborate wreaths and crosses decorated with paper or silk flowers. Among the edible delicacies offered are skulls called calacas (colloquial term for skeleton). Coffins are made from sugar, chocolate, or amaranth seeds. Sugary sweet rolls called pan de muerto come in various sizes, topped with bits of dough shaped like bones; in some regions, unadorned dark breads are molded into human figures called ánimas (souls).

Burning copal (incense) and the light of numerous candles are intended to help my spirit find its way home and provide it with an enticing respite and adequate sustenance for the journey. Frequently, they leave a washbasin and clean hand towel for me to freshen up before the feast. The offering includes my favorite meal and also a pack of cigarettes for my after-dinner enjoyment.

At the local cemetery, relatives prepare each gravesite. They cut weeds, give tombs a fresh coat of paint, and make needed repairs. The graves are then decorated according to local custom. The tomb may be simply adorned with a cross of marigold petals or elaborately covered with colorful coronas (wreaths) and fresh or artificial floral arrangements. In many regions, children's graves are adorned with brightly colored paper streamers or other festive adornments. Booming fireworks announce the commencement of an open-air memorial mass, the occasion's most solemn moment. 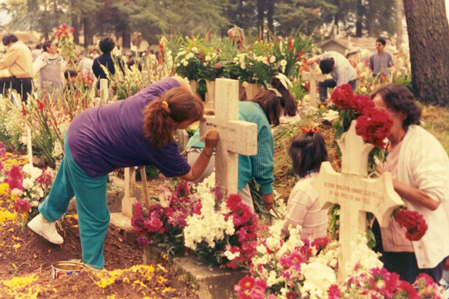 Family members tidying up, repainting, and decorating the gravesites of deceased family members in preparation for the Day of the Dead in Almoloya del Rio, Mexico, 1995. Remembrance and respect for one's ancestors are key elements of the celebration. Photo by Alejandro Linares Garcia, CC BY SA 4.0.

Calaveras, mischievous epitaphs of friends in poetic form, are written about me. In the late seventeenth century, a newspaper published a poem narrating a dream at a cemetery in the future where all people were dead and tombstones were read. Newspapers still dedicate Calaveras cartoons to public figures.

In Patzcuaro, Michoacán, godparents, in the first year following a child's death, set a table with sweets, fruits, pan de muerto, a cross, a Rosary, and candles in the home of the parents. This is done to celebrate the child's life and in respect and appreciation for the parents. In the town plaza or garden, there is dancing with colorful costumes, which include skull-shaped masks or devil masks. At midnight on November 2, people light candles and ride boats called Mariposas over to the island of Cuiseo—in the middle of the lake, where there is a cemetery—to honor and celebrate the dead there.6

One of my most unforgettable characters is la Catrina, also known as la Flaca, la Huesuda, la Pelona—elegant, thin, bony, and bald. She is not a model of fashion; she is not a trendy woman, yet she exists throughout Mexican society. La Catrina appears in figurines, paintings, and paper cutouts. She is the grand lady of death and makes no bones about it.

The Mexican American borderlands culture has continued its medieval homage to death and combined it with pre-Columbian motifs. From it has emerged an awareness of the brevity of life and an emphasis on a respect for the dead. In the American Southwest, as well as other places in the country, I am celebrated in public schools and on college campuses, at mercados, and at cultural and art museums. Both Latino and non-Latino students organize festivals for me every year at such universities as the University of Pennsylvania, Yale, and the University of California. In San Antonio, the Market Square is adorned with various altars and many muertos figurines. In the Rio Grande Valley, observances are made at local cemeteries, cultural centers, museums, and colleges. My tradition has traveled north and enriched those it has touched.

I have been paganized, Christianized, eulogized, syncretized, politicized, and commercialized, yet seldom minimized because I am what you will become, and you respect that reality. After all this time, the autumn moon still tells my story and beckons you to tell yours. Wait for me; welcome me; remember me; laugh with me; celebrate me; believe in me.

So, every year for two days in November, the living meet the dead to celebrate their love, their lives, and their legacy. It is a reunion that transcends our time on earth and beyond. You remember the dead, knowing that one day, you, too, will be remembered. Those who believe in the duality that bridges the flesh and the spirit know that they are part of a continuous cycle of life and death, separated by a single heartbeat. 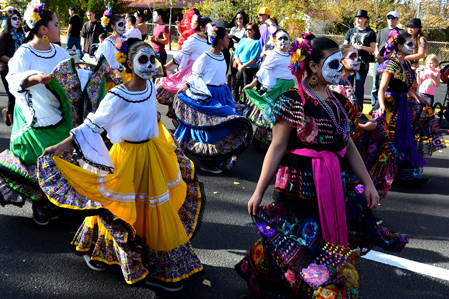 3 Mary Miller and Karl Taufe. The Gods and Symbols of Ancient Mexico and The Maya (London: Thames and Hudson, 1997), 74. 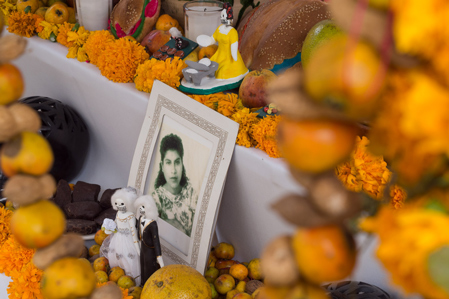 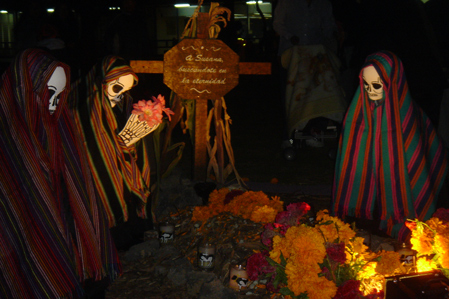 A Day of the Dead ofrenda at the National Autonomous University of Mexico Las Islas, 2005. Photo by Ivan Hernández, CC BY-SA 2.0. 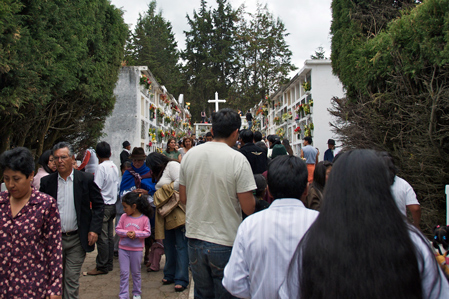 Visitors flood a cemetery on Day of the Dead in Cuyamba, Ecuador, near Quito. They leave Flor de Muerto on their loved ones’ graves, believing the flowers will attract the souls of the dead, 2009. Photo by A. Davey, CC BY-SA 2.0. 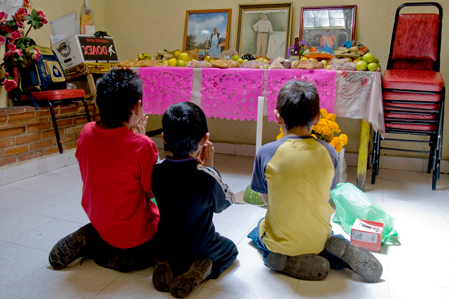 Children praying at an ofrenda decorated with papel picado, pan de muerto, marigolds, and other offerings, 2009. Ofrendas are often tailored to the preferences of the relatives they honor. Photo by Sari Dennise, CC BY-SA 2.0. 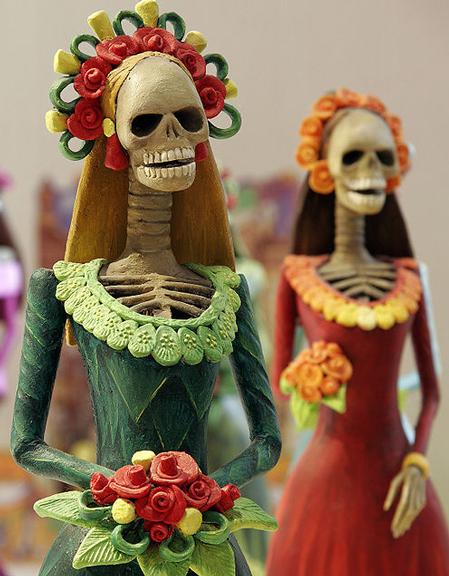 Figurines depicting La Catrina, the skeleton of a high-society woman and one of the most popular figures of the Day of the Dead in Mexico, 2007. Photo © Tomas Castelazo, tomascastelazo.com / Wikimedia Commons / CC BY-SA-3.0.

Translation by Dr. Lucy G. Willis, retired professor of modern languages at The University of Texas at Brownsville.