Twentieth-century Texas has provided rich ore for oral history. The same compelling logic that had led John Lomax to record African American folk songs to prevent their loss has motivated historians to capture the insights and experiences of Texans who have helped shape our modern world. Such topics as farming, ranching, the oil industry, military service in five wars, immigrants and ethnic groups, civil rights and the changing roles of women and minorities, and politics from the state house to the White House have been documented in thousands of interviews.

Universities have sponsored and served as the repositories for the largest ongoing oral history programs. These include the Baylor University Institute for Oral History, the University of North Texas (UNT) Oral History Program, the University of Houston Center for Public History, Texas Tech University’s Southwest Collection and its Vietnam Center and Archive, the Texas State University Public History Program, and The University of Texas at El Paso Institute of Oral History. The Dolph Briscoe Center for American History at The University of Texas at Austin has both conducted its own oral history projects and inherited others. The professionalism of Texas-based programs is reflected in the fact that Baylor’s Stephen Sloan currently serves as president of the national Oral History Association, a position previously held by three other Texans: Ronald E. Marcello of UNT, Albert S. Broussard of Texas A&M, and Rebecca Sharpless of Texas Christian University.

During Humanities Texas’s forty-year history, the council has sponsored and funded more than fifty oral history endeavors, including a number of significant community-based projects. Parallel and Crossover Lives: Texas Before and After Desegregation documented the impact of segregation and desegregation in four communities: Austin, Fouke, Hawkins, and Big Sandy. A series of interviews with accomplished Texas writers resulted in the 2005 publication Conversations with Texas Writers, edited by Frances Leonard and Ramona Cearly.  We have also partnered with the VOCES Oral History Project at The University of Texas at Austin to circulate the traveling exhibition Images of Valor: U.S. Latinos and Latinas of World War II.

More recently, our monthly e-newsletter has featured the reminiscences of World War II veterans, Dallas civil rights leader Juanita Craft, and, in conjunction with Humanities Texas’s fortieth anniversary, a series of interviews with former Humanities Texas board chairs and the late James F. Veninga, our executive director for twenty-two years.

Beginning with the March 2014 issue, our e-newsletter will include excerpts of oral histories of interesting Texans as a regular feature. 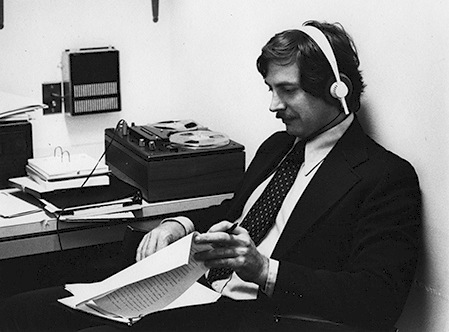 "A Conversation with Horton Foote"

"The Craft of Civil Rights"