A Drawing a Day: An Interview with Edward Carey

In March 2020, when author and illustrator Edward Carey found himself homebound by the COVID-19 pandemic, he picked up a pencil and began to draw. What started as a way to pass the time in lockdown has turned into an illustrated chronicle of the past sixteen months with Carey producing one drawing per day and sharing them on social media. The impressive and charming collection of sketches will be published in a book titled B: A Year in Plagues and Pencils, which is scheduled for release in November 2021. Humanities Texas asked Carey about the genesis of this project, his process, and how a doodle a day has helped him face the challenges of the past year. We are pleased to share the brief interview below.

Why did you begin the project?

At the beginning of the pandemic, just after fleeing back home to Austin after being in my native England, there was suddenly a huge amount of time ahead of me and nowhere to go. I had been working on a dark novel set in a hospital, and I felt I couldn't proceed with it right then—it felt too gloomy—but I couldn't do nothing. A day or two after returning, I absentmindedly drew a determined looking young man and I put the sketch on Twitter and Instagram—I sometimes share my doodling this way. But as I wrote the tweet, I added that I would keep doing a drawing a day until things were better again. I hadn't really meant to do it, but then I thought, "Why not?" I could do that at least; that wasn't too much. It would give a little structure to the aimless days, and it would be a way of marking time. So off I set.

How did you select the subjects?

To begin with, I'd just draw what I felt like, but then people started asking for different things: a capybara, a puffin, David Bowie, Virginia Woolf, a pangolin. Soon I found myself drawing all sorts of animals and people I wouldn't otherwise have drawn. It was a new way of communicating. Sometimes I look at who was born or died that day or what events took place. Sometimes I just drew what was local to me—grackles for example, or a beautiful green parakeet that died in the winter storm. Sometimes the day's events dictate the drawing. I drew George Floyd and Breonna Taylor, and also Biden and Harris during the election, or if someone has died, for example: RBG, John Lewis, Little Richard, Christopher Plummer. It has been such a long and difficult time that some days it just seemed necessary to draw a certain person, like AOC, for example, or Sarah Cooper. Sometimes the drawings were a way of escaping. I drew Stonehenge and Glastonbury Tor, or birds from my homeland or birds of Texas. Sometimes I drew fantastical things, monsters and creatures from folklore. It doesn't really matter too much what I draw as long as I've done one each day. To pass the time. To escape. To communicate.

How has the project been meaningful to you during the pandemic?

It has marked a whole year, and I've never done that before. It's been a diary, and I've never kept one. I lay the drawings out every fifty days, and now they cover much of the downstairs of our house. It has been such a strange time for all of us, and I can trace the anxiety, the despair, and the hope through the drawings. In some ways, it has been a wonderful distraction, and in other ways it has been a way for me to try and make sense of this awful time. It's been nice to draw my family too, nearby or far away, or even no longer with us, and it's been nice to draw small tributes in pencil to things I love, to draw so much nature. It's been great drawing what other people ask for.

What are your favorite sketches and why?

My absolute favorite is of a face that appeared in a tea towel one evening. I had no idea what I was going to draw that day, but there was a crumpled tea towel on the table that had fallen into this wonderful, grimacing face, so I drew that (Day 270) and showed a photograph next to it to prove I wasn't making it up. Suddenly there was someone new in the house.

Edward Carey is the author of the novels Observatory Mansions and Alva and Irva: the Twins Who Saved a City and of the young adult Iremonger Trilogy, which have all been translated into many different languages and all of which he illustrated. His novel Little has been published in twenty countries. His most recent novel is The Swallowed Man, a record of the two years that Pinocchio's father Gepetto spent in the belly of a whale. His artwork has been exhibited in Florence, Collodi, Kilkenny, Milan, London, and Austin; his essays and reviews have been published in The New York Times, The Guardian, The Observer, Corriere della Serra, and La Repubblica among others. 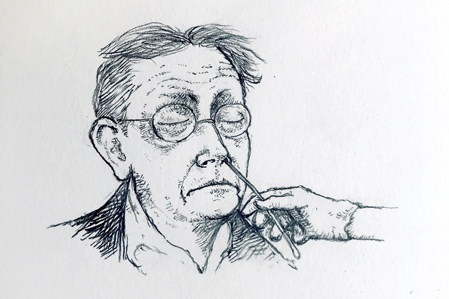 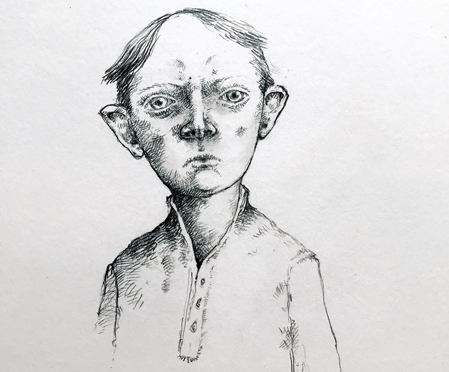 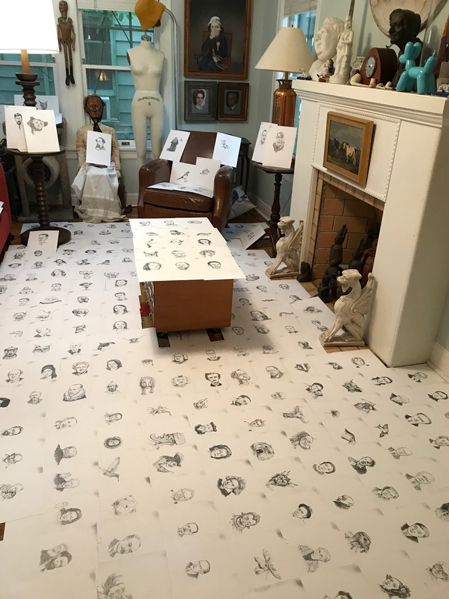