Earlier this month, Humanities Texas held a series of one-day professional development workshops for teachers throughout Texas examining critical events in U.S. history from 1776–1836. Among the distinguished scholars who served on the faculty were Dr. Daniel Walker Howe and Dr. Daniel Feller, both of whom have participated in a number of Humanities Texas programs. Because the two have become close friends over the years, we invited them to introduce each other to the teacher audiences before their respective lectures at each workshop. Below are the warm remarks delivered by Dr. Feller and Dr. Howe.

It gives me great pleasure to introduce to you an outstanding scholar, a gentleman, and in the many years I have known him, a truly wonderful human being, Professor Daniel Walker Howe.

Dan was born in Denver, Colorado, in a log cabin, and from that humble beginning he has risen to the very heights of the historical profession as a professor of history and chair of the department at UCLA and also as the Rhodes Professor of History at St. Catherine's College at Oxford University—that is the original Oxford, not the one in Ohio or Mississippi, but the one in England.  And his wife is also a school teacher.

Over the course of a long career, Dan has written with authority and distinction on a wide variety of topics in nineteenth-century American history: on religion, on reform, on intellectual history, and on politics. So it was only fitting when the editor of the Oxford History of the United States wanted someone to write a volume on the period from the 1810s to the 1840s—what I call the Jacksonian Era, but Dan does not, because he and Andrew Jackson are not exactly best friends—it was only fitting, I say, that the editor turned to Professor Howe as the acknowledged leading expert on the period to write that much anticipated book.

Let me just say a word about its anticipation. At the University of Tennessee where I teach, every year we invite a distinguished scholar to come and give a talk. We were gathered in conclave several years ago, and we were saying, "Well, who should we invite?" And someone said, "Why don't we invite Dan Howe?" And I said, "Well, his book is about to come out. It's going to win a Pulitzer Prize. Let's invite him after that." That's exactly what happened. The book is called What Hath God Wrought and Dan himself will say some words about that. It's a magisterial, comprehensive, beautifully written, authoritative history of the period from the 1810s to the 1840s, a very exciting period. Again, let me give you a scholar, gentleman, and my very good friend, Daniel Walker Howe.

It's my pleasure to introduce to you Dr. Dan Feller who is professor of history at the University of Tennessee and also the director of the Papers of Andrew Jackson, which is a project that collects all of the writings of President Andrew Jackson, whether they are public statements that he made when he was a senator or president or simply little memos that he might've jotted down or letters to people or official instructions that he gave to certain individuals and so on.

It's an enormously complicated process, and right now they're in the middle of President Jackson's presidency. That is, they have published all the years before he became president. They're in the middle of the presidency, and Jackson's papers are absolutely fascinating, and when historians read the published accounts they see all kinds of new stuff that they hadn't thought of before or correct common mistakes that had made their way into history books and so on. So this is a truly wonderful project.

Professor Feller has also written some books of his own dealing with the period when Andrew Jackson lived, and he's at work on an absolutely fascinating biography of a man named Tappan whose brother was greatly involved in the Second Great Awakening. But the Tappan brother whom Dan writes about was not at all religious and didn't like the Second Great Awakening at all but was a very interesting person.

I have to say that Dan is completely comfortable in the world that was inhabited by Andrew Jackson. He understands that world perfectly, and it's just so wonderful to talk to another historian and to see how well Dan understands it. That's what being a historian to me is all about—being able to live vicariously in another world. And he can do it.

Well, Dan and I don't see each other nearly as often as I wish we did, but even so, I can tell you that he is one of my very best friends. 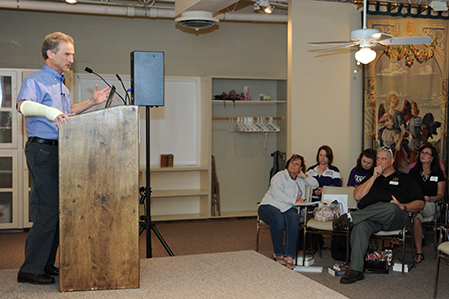 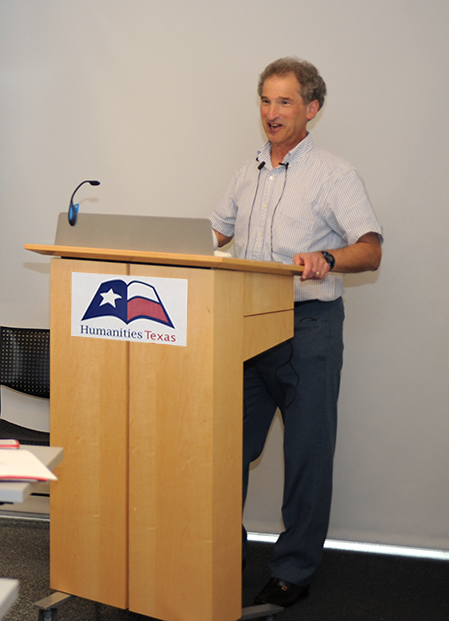 Dr. Feller introduces Dr. Howe at the workshop in Houston on October 2. 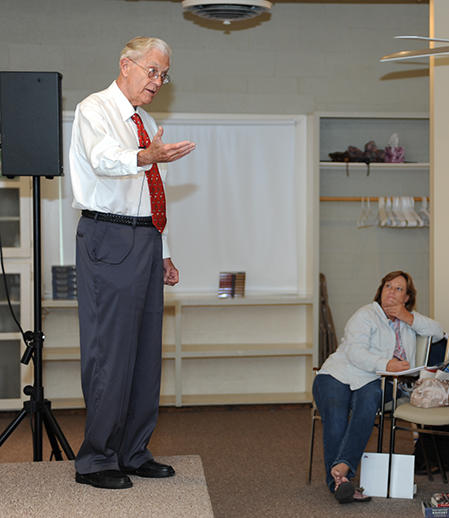 Dr. Howe introduces Dr. Feller at the workshop in Dallas on October 4. 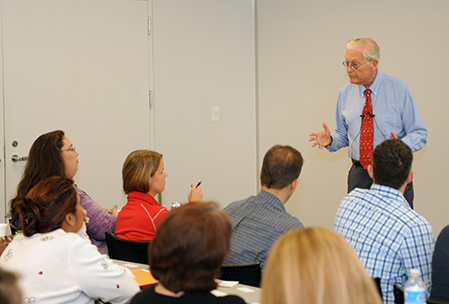 Dr. Howe introduces Dr. Feller at the workshop in Houston on October 2.