The painter, illustrator, and writer Tom Lea found continual inspiration in and around his hometown of El Paso. Its mountains, its unique desert light, and its various inhabitants all figure prominently in his work. Lea was born in El Paso on July 11, 1907, and after attending the Art Institute of Chicago, studying in Europe under masters like Eugene Delacroix, and living for a time in Santa Fe, New Mexico, he returned to his home town in 1936 and spent the rest of his life there.

To honor Lea and his work, the City of El Paso has declared July 2010 the fourth annual Tom Lea Month. In celebration, the Tom Lea Institute, the El Paso Times, and other community organizations will hold exhibits, lectures, classes, film screenings, and tours throughout the month of July.

A series of lectures in Dallas and El Paso will comprise the Tom Lea University. Topics will include a series of eleven paintings commissioned for Life but never published, which are not normally exhibited, the influence of the Italian Renaissance on Lea's painting, and literary analysis of his novels.

Other public programs include screenings of the film adaptation of Lea's The Brave Bulls and The Wonderful Country, a creative writing workshop responding to Lea's work, and an outdoor, hands-on painting session in which participants will learn some of Lea's techniques for capturing his surroundings, With events taking place nearly every day, El Pasoans and visitors of all ages will find new and enriching experiences. A full schedule is available here. 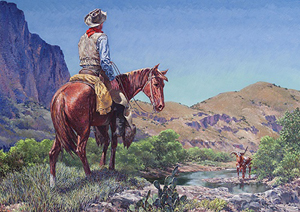 And There He Was by Tom Lea, 1970. Image courtesy of Adair Margo Fine Art.