In less than a year, more than 30,000 visitors have passed through the doors of the new El Paso Museum of History, which opened on June 16, 2007, in the city's growing downtown cultural district.

"Last year, the El Paso Museum of History moved from the Dark Ages—an undersized building with roof, plumbing, and location problems—to the modern world—a brand-new, two-story building in downtown El Paso with gallery, storage, and office space, an HVAC system, and all the computer amenities," said Barbara Angus, the museum's interim director and senior curator. "All in all, the museum tripled its physical space and its staff size."

"Moreover, the museum's new proximity to the University of Texas at El Paso strengthened a previously long-distance relationship (the museum was once seventeen miles away!), providing the museum with lecturers on a variety of El Paso-related topics," she added.

"The museum has been a handsome and much-needed addition to downtown El Paso," said J. Sam Moore Jr., a former member of the Humanities Texas board who serves on the board of the El Paso Museum of History Foundation.

The El Paso Museum of History began in 1974 as the Cavalry Museum and changed its name in 1980. The new facility, which cost just over $6.5 million, was approved as part of a bond issue in 2000 and was designed by Joe Gomez and Cesar Duran of Synthesis Architecture, Inc. The museum includes two permanent exhibits—"El Paso A-to-Z" and "Changing Pass"—and space for temporary exhibits.

This year, the museum has hosted two Humanities Texas traveling exhibitions: "Destination México," which reviews eight decades of U.S. tourism in Mexico, from the first rail connections in the mid-1880s to the beginning of the jet age in the late 1950s, and (through May 23) "Citizens at Last: The Woman Suffrage Movement in Texas," which documents the efforts of Texas women as they joined the national struggle to win the right to vote. "Humanities Texas has been of significant and valued assistance in the museum opening and the museum looks forward to a continued relationship," said Moore. 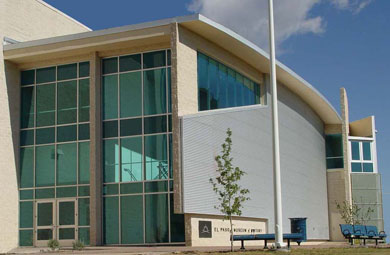