How extraordinary it must have been for a woman without a doctorate to teach at the college level fifty or sixty years ago. Not only did the academic guild resist opening its ranks to anyone without a terminal degree, but women scholars were historically underrepresented on university faculties, comprising fewer than 22 percent as recently as the mid-1970s. Imagine a woman armed only with two master’s degrees holding consecutive teaching positions at seven prestigious institutions, including Barnard, Sarah Lawrence, MIT, Georgetown, the University of Cambridge, and The University of Texas. Early in her career in the late 1930s, she helped found the field of American Studies. Almost six decades later, she continued to teach at the LBJ School of Public Affairs, where she had served as dean from 1977 to 1983.

Everyone who knew Elspeth Davies Rostow, who died on December 9, 2007, realized that she was indeed extraordinary. At her memorial service on December 14, a number of those who knew her best shared their eloquent remembrances of a remarkable humanities teacher and colleague.

Below are two such tributes.

Contrary to something my father wrote many years ago, matriarchy is not an oppressive form of government. We know that here.

Elspeth Davies Rostow was my direct link to worlds that I had tasted but that she had lived. She first met my mother, then fourteen years old, at Camp Marbury on the shores of Lake Champlain near Vergennes, Vermont, in 1927. She knew the Cambridge of Kaldor and Lady Keynes, the MIT of Kindleberger and Samuelson, the Washington of Kennedy and Johnson, and her family roots went back to a New York I never knew and even to the mist-bound age of New England ship captains. We met when I was two years old. When I was thirty-five I had the pleasure of vetting her for a presidential appointment, and I stated on my personal authority that she had not abused drugs in thirty-three years.

She escorted Leadbelly to parties at Columbia and she dined with Andre Malraux at the White House; if you wanted to cast a film star in her role you would have chosen Eva Marie Saint—oh, wait . . . Eva Marie Saint did play her, thinly disguised as Elspeth Whittaker, in The Russians Are Coming, the Russians Are Coming, in 1966. And yet for all that, she was also Texan. More precisely, she became Texan, implausibly and to her own surprise. Or again: she came to Texas, and the state made room.

She loved The University of Texas at Austin as an extension of her own soul. Her star turn came as dean of the LBJ School, but there was much more, done quietly, in later years. She knew our campus like an air traffic controller knows the sky. And in all essential matters she saw exactly where the interest of the university lay. How many of you—I should say, how many of us—are here today, because she made the right call at the right time?

And the teaching! Through and with and around Walt she observed the presidency and foreign policy at close range, spent sixty-five years in the classroom teaching it and never lost her taste or touch or verve. And the paperwork! How many hours did she spend on her couch, student papers or Texas Excellence Fellowship applications piled high around? And the meetings! For how many years did she patiently interview the best students we have, screening and coaching them for the Rhodes and Marshall competitions? How many debates, in how many departments, did she decide, or defuse, with an aphorism or an epigram?

In conversation she was wry, pithy, arch, irreverent. What Bill Buckley said of my father applies to her: she was “syntactically pure.” The pleasure of her company was that of sharp judgments, never malicious but never saccharine, always delivered with not a single extra word. Once after slipping out of a symposium I asked her later if there had been any controversy after I left. No, she said. “Everyone was brilliant. Everyone said that everyone was brilliant. Everyone was wrong.”

She and her beloved Walt opened their house to my family, and alongside her circle of gracious and fascinating friends we celebrated birthdays and Thanksgivings and a wedding and shared two memorials before this one. But how many others, who saw her less, felt the touch of her friendship just as much? The former Indian Foreign Secretary Jagat Mehta writes that at my father’s memorial in Cambridge last year she took his daughter Vijay aside “and told her in a whisper, ‘You know I have always been in love with your father.’ That was her method,” Jagat wrote, “of expressing her sustained affections for me over the years that I was in Austin.”

My wife wishes it known that to her, Elspeth was the perfect blend of professional, mother, and spouse; together they understood exactly what place the cosmos reserves for husbands. A card in her hand, dated April 1993, captures her comic timing. It reads: “Dear Ying, now that we know that the date has been set, we feel it is safe to give you this haunting query from another century. With great affection, Walt and Elspeth.” The enclosure, sheet music dated 1871, carries these lyrics: “Jamie has long been a-courting me, Never was lover more true. But if he asks me to marry him, What in the world shall I do?”

As a woman she was elegant, impeccable, exquisite, but the words do not do exact justice. She had perfected the high art of the mask—of the feminine poker face. But the mask was there to be lowered; she would let you slip in behind it, to see the twinkle in her eye, the impish smile, to share the confidence or the touch of wit. As the photographs have captured, she was intensely beautiful when young, and again intensely and I think increasingly beautiful in great age. I was in love with her from the day I arrived in Austin until the day she died.

Of her last week, this is what we know so far. On Wednesday night, she attended the LBJ School holiday party; I came in as she was leaving and she noted that I was wearing Walt’s tie. On Thursday she attended the PhD colloquium; the topic, near to her heart, was the preparation for college of high school students in Central Texas. Friday she finished her grades and went to another party. On Saturday evening she dined at home—on a martini.

How we wish we could have kept her longer. But as my daughter Eve, now eleven, wrote to Ann last Sunday, she was the perfect person. She lived in grace and style to the last day. How lucky we were, to have known her so well and to have kept her so long.

Harry J. Middleton
Former director of the Lyndon Baines Johnson Library and Museum, The University of Texas at Austin

We were friends for forty years. In that span of time, I had many occasions to watch Elspeth work her magic on people and assemblies—beguile presidents and students and colleagues alike, give heart to a faltering educational institution, give her name, her prestige, and her considerable efforts to a project to help a city's neediest students.

History will record and long remember her contributions to the betterment of society. For my moment here, I want to note some of the effect she had on that corner of society I saw and shared with her. Like so many here today, I had the pleasure and privilege of experiencing some of those attributes—the intelligence and charm, the cool resolve and effectiveness—that made Elspeth Davies Rostow an institution on a university campus and the community around it.

She seemed to know everyone on the planet, and everyone in her orbit responded to her in a particular way.

She made us—well, some of us—feel smarter then we actually were.

She knew how to establish a sense of community. At a memorial service for Gladys Weintraub, she brought cheers and laughter from a roomful of Jews in mourning by observing that one sad shiksa was present as well.

A particular response that I remember well occurred several years ago, at a symposium we had planned together. She had managed to get Buckminster Fuller—then a hero to university students—as keynote speaker. The problem was that Mr. Fuller was notoriously long-winded. But just as he approached the podium, Elspeth cautioned him that his address should be no longer than twenty minutes. He took out his watch and set it before him. He spoke for twenty minutes and stopped—smack in the middle of a sentence.

I relished her sense of the ridiculous, even when I was the victim. Once, in a jocular moment over drinks, I suggested that perhaps we should consider getting married.

"If you ask me that again," she said, "I'm going to say yes—and scare the hell out of you."

She was a towering presence in my life, as she was in so many of yours, and in the community life we share, and I will miss her greatly. But she left me something to carry forward. "The best gift," Lady Bird Johnson once said, "is a memory." For those of us who knew the rich and rewarding pleasure of her company, Elspeth's gift is a memory that will be always vibrant and forever alive. 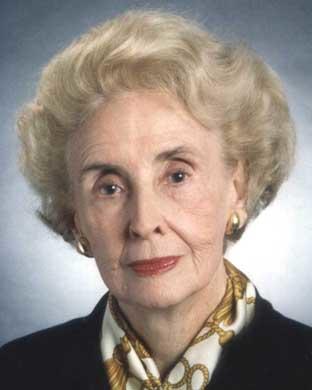