"Intimate Modernism: Fort Worth Circle Artists in the 1940s" is the title of an exhibition at Fort Worth's Amon Carter Museum. The exhibition, which runs through May 11 and is partially supported by a grant from Humanities Texas, includes more than 100 works by eleven influential artists, including Dickson Reeder, Bill Bomar, Kelly Fearing, Cynthia Brants, and Bror Utter, and represents the first in-depth examination of their work.

The following is excerpted from an Amon Carter Museum press release:

"Many of the works in the exhibition will be making their first public appearance in more than fifty years," said Jane Myers, senior curator of prints and drawings and organizing curator of the show. "Together, the works will reveal a fascinating story of vibrant and vitalized collaborations and friendships, and they will tell the tale of how progressive art came to Texas."

The origin of the Fort Worth Circle can be defined as a nucleus of four locals in their mid-twenties who met as art students at the Fort Worth School of Fine Arts: Lia Cuilty, Veronica Helfensteller, Marjorie Johnson, and Bror Utter. Just prior to America's involvement in World War II, Dickson Reeder, a high school classmate of Utter's, assumed leadership of the group. Reeder and his New York-born wife, Flora Blanc, provided the social glue that bonded the group together. Also in the sphere were Sara Shannon and William P. (Bill) Bomar Jr. Reeder, Bomar, and Helfensteller all received private art instruction as teenagers from the same teacher. Kelly Fearing was assimilated into the group after moving to Fort Worth during the war. In 1945, Cynthia Brants became the youngest female member of the Circle, and the following year George Grammer, the youngest of the artists, was the last to join when Fearing and the Reeders, who had followed his work, looped him into their network.

Drawn together by their common interest in art, dance, music, theater, and myth, the artists of the Fort Worth Circle sought new avenues of artistic expression to counter the prevailing preference for regionalism and other more conservative artistic styles. They also shared a fascination for the fantastic, often employing enigmatic imagery. Members of the Circle responded to modern art by creating a unique aesthetic based on contemporary surrealism and abstraction, and they did so by drawing from their own fertile imaginations.

The determination with which the group ascended in the city and the dominance they established in the public mind became the driving forces of Fort Worth's art world throughout the years of World War II and the decade beyond. Among the legends and legendary figures of Fort Worth—and there are many—the artists of the Fort Worth Circle occupy a special place as pioneers of modern art in the Lone Star State.

The decade of the Fort Worth Circle's rise to prominence is a little-known high point in the artistic legacy of Fort Worth and the state of Texas. Largely apolitical in an era rife with global upheaval, the Circle remained ideologically charged by their unyielding belief in the transformative power of art. By the mid-1950s, the group's aesthetic was pushed aside by newer ideas, but their legacy of change and openness to the unlimited boundaries of art was firmly entrenched. They later became influential teachers and artists and played a critical role in the region's growing arts community, which continues to thrive today and encourage the careers of emerging artists. Works by artists of the Fort Worth Circle now reside throughout the state in museums and private collections, so the exhibition presents a unique opportunity to view the works together.

"Intimate Modernism: Fort Worth Circle Artists in the 1940s" is organized by the Amon Carter Museum. The exhibition and accompanying catalogue are made possible in part by RBC Wealth Management, the William E. Scott Foundation, Humanities Texas, the Texas Commission on the Arts (TCA), Mrs. W. K. Gordon Jr., Quicksilver Resources, the Betty Sanders family, Valley House Gallery and Sculpture Garden, and numerous individuals and organizations who remember and value these Fort Worth artists. 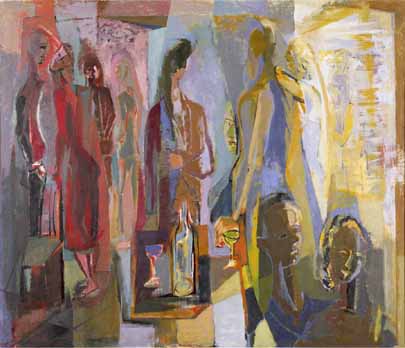 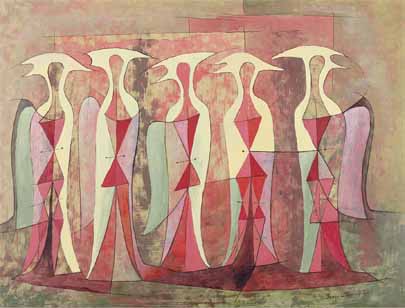