In honor of Women's History Month, we are featuring a video of Professor Gretchen Ritter's presentation on citizenship and women's political activism, given at the Lyndon Baines Johnson Library and Museum during our summer 2011 teacher institute, "The Making of Modern America." Ritter is professor of government, vice provost for undergraduate education and faculty governance, and the director of the Course Transformation Program at The University of Texas at Austin. Watch the video (right) and read an excerpt of her remarks below.

Women weren't strongly represented in the community governance vision in the Bill of Rights. Women weren't included on juries; they weren't serving in militias; they weren't commonly part of assemblies. So to the degree that you're thinking about how your communities are organized and how that provides a foundation for democracy, we were typically thinking of men as heads of households. And, of course, there are exclusions for women on all these things at the time. But I do want to suggest also that they may have been represented in the more freedom-of-conscience provisions. One that I want to suggest is really important for women over time, even more than free speech, is the free exercise of religion.

There is also a really great reliance on freedom of conscience. How do women enter political activism in American history? It's often by claiming their own notions of justice, of morality, and attaching those to religion. A very early example, one that predates the founding, is Anne Hutchinson: "God told me this; I have freedom of conscience to express it." You can think about all the activists connected with abolition. Abolition becomes the first big, national movement where women have a strong presence. Both African American and non–African American women activists are claiming religion. Many of them, in fact, are ordained.

A gender exclusion was explicitly being written into the Constitution, and that made it harder. So at that point, women said that if we're going to get any other rights and protections, we need the right to vote. One way of thinking about why the right to vote is so significant is that there was an assumption up to this time that women's political interests were represented by their families—their husbands or their fathers. So the most radical thing about the right to vote in this period was the idea that women would have individual interests separate from their husbands' and their fathers'.

The civil rights legacy is so fundamental to the women's rights movement. We can't teach this or talk about it adequately without making this connection. There's been a lot of great scholarship in recent years on the way that World War II and the Cold War set up what we have come to know as the rights revolution. How we start to differentiate ourselves from Nazism, from the Soviet Union, and think about what makes us a great nation is our commitment to a certain notion of rights. That gets traction first around [the subject of] race and then spreads—some would say it's continuing to spread—through other groups, the first large one being women. And the model of this on an activist side . . . is the NAACP Legal Defense and Education Fund, which pursues a very clear legal strategy of changing our interpretation and understanding of the equal protection clause, a strategy that ultimately results in Brown [v. Board of Education] with a lot of other cases along the way. Women did the same thing. Ruth Bader Ginsburg consciously follows the strategy of NAACP Legal Defense and Education. She did it when she was head of the Women's Rights Project for the ACLU. She argues a series of seven cases before the Supreme Court in the 1970s, wins all but one of them, I think, and gets the equal protection clause finally applied to sex discrimination.

Gretchen Ritter of The University of Texas at Austin delivers a talk on citizenship, the Constitution, and women's rights on June 6, 2011, at the Lyndon Baines Johnson Library in Austin, Texas. 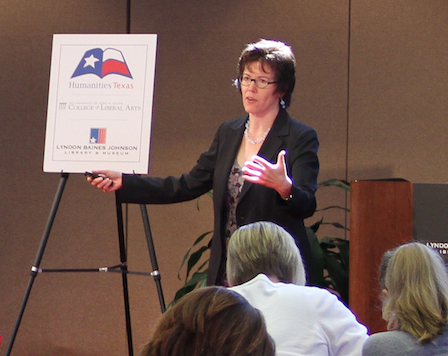 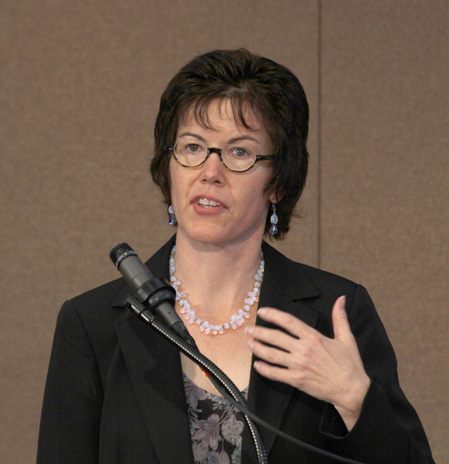