A Home for the Humanities

From the first time Humanities Texas staff toured the building at 15th and Rio Grande, we knew we had found something special.

Although at first glance, a casual observer would see a nondescript 1970s stucco façade, careful observation showed that the best of the Byrne-Reed House was under wraps. Peeking above the drop ceilings revealed original door and window openings and historic trim. Pulling up layers of carpet and padding uncovered original flooring. Historic photographs depicted an elegant exterior adorned with nine arches still intact underneath layers of stucco.

Journeyman Construction, Inc., the general contractor, performed pre-construction discovery, during which a number of exciting architectural elements were exposed. Two historic windows that were completely covered by stucco and wood paneling were found in place on the second floor. The windows were in their original wood frames with original glass, hardware, and screens. During this phase, the original encaustic tile on the exterior porches, which was previously only seen in historic photographs, was found underneath four inches of poured concrete slab.

The discovery phase also revealed many sections of the decorative plaster frieze crowning the building and parts of the plaster column capitals atop the porch columns were still intact.

For the demolition and abatement phase of construction, Journeyman brought in subcontractor Building Abatement Demolition Company, Inc. The demolition and abatement team was sensitive to the history of the building and was careful to protect and maintain the original materials that were hidden under layers and layers of previous renovation. During the demolition process, several more historic elements were discovered, such as beautiful iron-flecked brick that was used to highlight architectural features such as arches and doorways, much of the existing wood floor, and more encaustic tile throughout the first floor terraces.

In addition, a segment of original wrought iron railing was discovered embedded in a plaster wall. This found segment was used to replicate the missing sections of railing.

One of the most exciting discoveries was a number of broken original tiles that had been discarded when a composition roof was installed in the early 1950s. These tiles were stamped with "LUDOWICI-CELADON CO," the name of a tile manufacturer in New Lexington, Ohio. Lead architect Emily Little sent the piece of clay to the manufacturer, now simply called Ludowici, who sent back a sample of the reddish-brown tile. The next shipment from Ludowici was much larger—enough red clay tile to cover a surface of more than 5,100 square feet. This new tile, which has been applied to the roof of the Byrne-Reed House, replicates the house's original roof.

Early in the demolition phase, Ms. Little also confirmed that Charles H. Page was the architect of the Byrne-Reed House. His great-grandson, Charles Page, is president of Austin Air Balancing, one of the subcontractors on the project.

Historic lighting consultant Darlene Marwitz and Betty Brady of Brady's Distinctive Lighting determined that three of the light fixtures that were in the building at the time Humanities Texas purchased it were historic to the Byrne-Reed House residential period. Two of the fixtures dated to the 1920s, and one dated to the late 1940s. Brady's fully restored these fixtures and the fixtures were reinstalled in the house under Ms. Marwitz's guidance.

To restore and preserve extant materials and to recreate important, documented architectural elements, a number of skilled and knowledgeable subcontractors were brought in to work on the project.

Adam Zamora and Jaime Nieto of Frontier Contractors, Inc. played a large role in overseeing the fabrication of custom reproduction wood windows and doors, and Darrell Black Custom Wood Flooring and GQ Tile Company performed cleaning and restoration of the historic flooring materials on the interior and exterior of the building.

Louis Hayn and the team at Looking Good Masonry did an extraordinary job repairing and restoring the original brick exterior of the Byrne-Reed House. Their work included replacing areas of lost brick, repairing columns and porch skirts, rebuilding porch railings, and recreating chimneys. They used a combination of new brick with historic brick culled from less public areas of the building to seamlessly integrate new material with the old.

Matt Henson from Professio, Inc. was responsible for the restoration and reproduction of the molded ornamental plaster elements of the Byrne-Reed House. These elements included the exterior frieze and column capitals and the interior dining room ceiling. For those pieces that needed to be reproduced, Professio gently removed pieces of the original plaster and took them to the Professio studios in Lubbock, where molds of the originals were made and reproduction pieces cast.

Martin Diaz of Diaz Plastering, Inc. oversaw the restoration and reproduction of the other decorative plaster elements at the Byrne-Reed House. Diaz re-plastered all of the appropriate interior surfaces and, most notably, recreated the distinctive scalloped plaster design on the exterior porch arches entirely by hand. Based on a historic photograph of the house, Diaz counted the number of scallops up and across on each arch to assure the restoration was as accurate as possible.

Tucker Welding handled the reproduction of the monumental bracket at the northeast corner of the building and oversaw the reproduction of the remaining second floor porch railings based on the original length of wrought iron railing found in the wall of the Byrne-Reed House. The new railing components were welded together, but in order to replicate the historic railing, which was riveted, the heads of rivets were cut off and welded in place to match the original.

These are just a few of the outstanding team members that made restoring the Byrne-Reed House to its original grandeur possible.

As we neared the end of construction, some additional historical information came to light. Doug Oliver, historian, and James Powell, wood carver, contacted architect Emily Little about the association of the Byrne-Reed House with prominent Texas wood carver Peter Mansbendel. Both provided evidence that Mansbendel had created the pine woodcarvings on the walls of the dining room. Powell provided a historic photograph of an elaborate Jacobean mantelpiece that Mansbendel had carved for the gallery fireplace when the Reeds lived in the house. Humanities Texas is considering a future project to have this mantel reproduced.

In addition, the presence of Mansbendel's work indicates that at least some of the historic lighting fixtures in the house (extant or evidenced in historical photographs) may be the work of ironworker Fortunat Weigl. We are in the processing of researching this association further and have already uncovered some records that suggest that Weigl completed several fixtures for the Reed family. As Humanities Texas continues this research, it is also investigating reproduction of the iron fixture that hung at the base of the gallery stairs and the sconces at the gallery fireplace, both features documented by photographic evidence.

We hope that you will have a chance to visit the Byrne-Reed House and see the remarkable restoration for yourself.

Humanities Texas is in the final stages of our capital campaign supporting the restoration of the Byrne-Reed House. We are immensely grateful to the individuals and foundations that have contributed to this project and would appreciate any and all additional support. Your contributions will help us receive the full $1 million in matching funds from our National Endowment for the Humanities challenge grant. 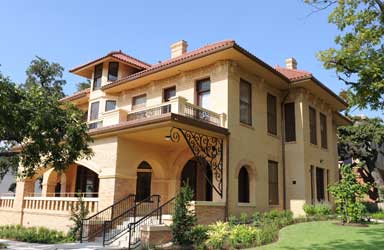 The northeast corner of the Byrne-Reed House. All photos by Humanities Texas unless otherwise noted. The same view in October 2009, prior to restoration. 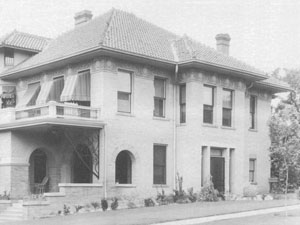 Compare this 1927 photo to the house's current appearance. The window shades are a later addition that we have not replicated. 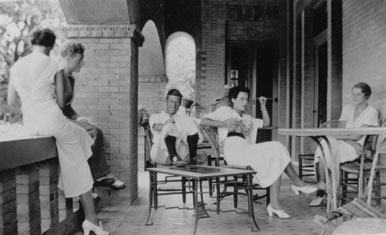 The same terrace in the 1930s. Photo courtesy of the Reed family. 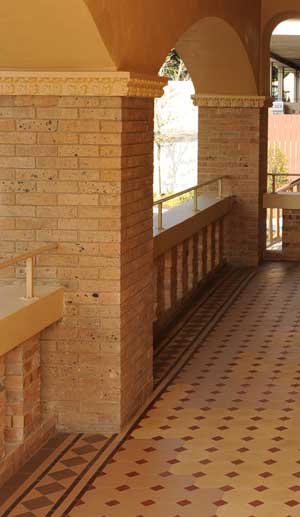 A closer view of the plaster column capitals, iron-flecked brick (in the columns), and encaustic tile. 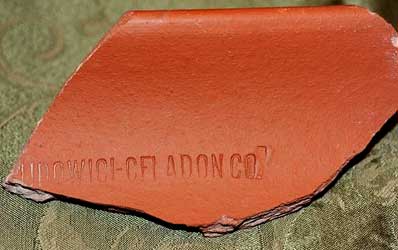 A piece of original tile found during demolition. 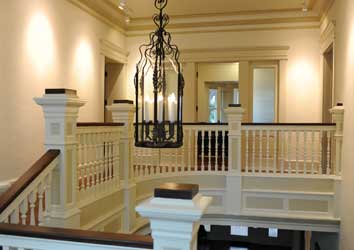 A 1920s light fixture hangs above the grand staircase. 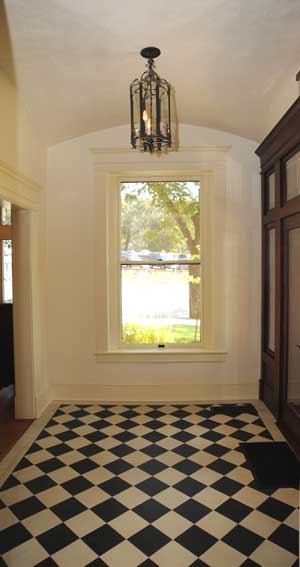 Black and white encaustic tile in the foyer. 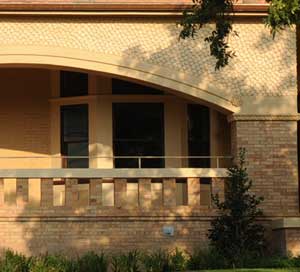 A closer view of the scalloped plaster detail. 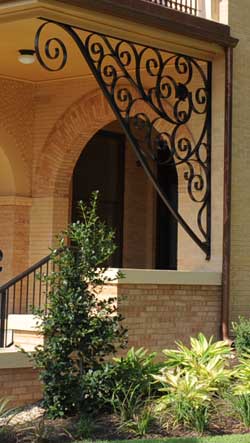 A closer view of the bracket. The fireplace and sconces Peter Mansbendel crafted for the Reed family.