Humanities Texas announced today that it will receive a $1 million challenge grant from the National Endowment for the Humanities. This grant, NEH's largest single award in Texas, will be used to restore the historic Byrne-Reed House, the headquarters of Humanities Texas.

"With the restoration of the Byrne-Reed House, Humanities Texas will inhabit a new facility; one that preserves a cultural snapshot of the past while expanding its ability to offer innovative humanities programming well into the future," NEH Chairman Bruce Cole said. "It will promote scholarship and the humanities in the capital, while engaging citizens, students and scholars throughout Texas."

Humanities Texas, the nonprofit state affiliate of the NEH, has launched a $6 million capital campaign to restore the century-old mansion at the corner of 15th and Rio Grande in downtown Austin. The NEH challenge grant brings the total amount Humanities Texas has raised to almost $3 million.

"We deeply appreciate NEH's tremendous investment in our state," said Dr. Michael L. Gillette, executive director of Humanities Texas. "Once Humanities Texas has restored this hidden landmark, the Byrne-Reed House will become an important venue for exhibits, lectures, teacher workshops and many other public programs. In addition, its renovation will allow us to expand our mission of assisting educational and cultural organizations all over Texas."

The Byrne-Reed House is named for its two earliest families, prominent Austinites Edmund and Ellen Sneed Byrne and David and Laura Moses Reed. Between the 1940s and 1970s, subsequent owners converted the house to offices and made significant changes—the most dramatic of which was to add massive columns along the 15th Street side and to cover the entire exterior with a white stucco façade. Humanities Texas will remove the stucco and columns and restore the exterior and interior of the Byrne-Reed House to its original appearance.

"The $1 million grant—the largest grant to Texas in their history— is evidence of the commitment and confidence that NEH has in Humanities Texas," said Julius Glickman, chair of the Humanities Texas capital campaign. "Texans will not let them down."

The NEH grant requires Humanities Texas to raise $3 million to receive the $1 million challenge grant. "Texans will now have a unique opportunity to show how much we value our heritage and culture," Dr. Gillette said.

The Byrne-Reed House restoration has also received generous support from The Brown Foundation, Inc. of Houston; the Fleming Endowment; the Texas Historical Commission; the T. J. Brown and C. A. Lupton Foundation; the Vick Family Foundation; the Mincberg Charitable Foundation; The William A. and Madeline Welder Smith Foundation and the Inge Foundation. "The NEH’s generous support will excite and energize board members, board alumni, staff and participants in our various programs, and it will open countless new doors for us," said Joseph R. Krier, chairman of the Humanities Texas Board of Directors. "The challenge grant for the Byrne-Reed House restoration will have a transformative effect on the organization." More » 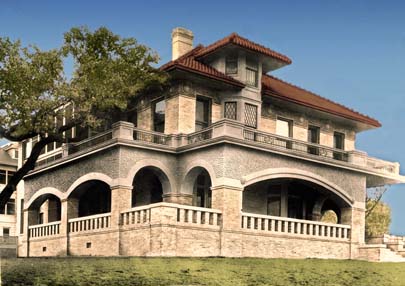 The grant will help restore the Byrne-Reed House to the way it looks in this colorized photo, circa 1910.