Austin is, among other things, a remarkable writers’ colony.  The presence of The University of Texas at Austin, the seat of state government, and magazines such as Texas Monthly and the Texas Observer has drawn legions of scholars, political reporters, and professional writers to the capital city. The Humanities Texas Book Fair, held to raise money for the libraries affected by Hurricane Ike, showcased this wealth of literary talent. On December 13, 2008, twenty-two area authors descended on the Byrne-Reed House to sign copies of their recent books for holiday shoppers. The results were book sales of $7,500 in three hours, the dissemination of important new humanities titles to the reading public, and a festive reunion of Austin-based writers. The event, which raised more than $2,300 for our fund to assist libraries, coincided with National Endowment for the Humanities Chairman Bruce Cole’s announcement of a $30,000 emergency grant to aid this effort.

The participating authors underscored the diversity of Austin’s literary community. Historians included H. W. Brands, whose new biography, A Traitor to his Class: The Privileged Life and Radical Presidency of Franklin Delano Roosevelt, is appearing on bestseller lists; and Jacqueline Jones, a distinguished scholar recently lured to UT from Brandeis University just before the publication of her meticulously researched and beautifully written history of Savannah before, during, and after the Civil War, Saving Savannah. From philosophy came Paul Woodruff with The Necessity of Theater, a profound analysis of the importance of the performance arts in society, while James K. Galbraith ably represented economics with his provocative, elegantly crafted new treatise, The Predator State, already in its sixth printing. Three of Austin’s most prominent writers signed copies of their latest major nonfiction works: Lawrence Wright’s magisterial, Pulitzer Prize-winning history of Al-Qaeda, The Looming Tower; Joe Nick Patoski’s celebrated biography of Willie Nelson; and Bill Wittliff’s stunningly beautiful photographic volumes, Photographs from Lonesome Dove and La Vida Brinca.

Novels were also popular with Book Fair shoppers. Stephen Harrigan inscribed copies of his latest book, Challenger Park, and his classic historical novel of Texas independence, The Gates of the Alamo. Sarah Bird’s new novel, How Perfect is That, was a popular purchase, as were Elizabeth Crook’s The Night Journal and James Magnuson’s The Hounds of Winter. Angela Shelf Medearis contributed a wonderful volume for young readers in Daisy and the Doll and two of her latest inspiring cookbooks. For Spanish-speakers, Miguel Gonzalez-Gerth’s splendid volume of poetry, Looking for the Horse Latitudes, presents the same verses in both English and Spanish. Gonzalez-Gerth also donated several copies of another elegant collection of poetry, The Brandywine in Winter, while Bill Wright contributed a case of People’s Lives, his extraordinary volume of photographic portraits from distant lands.

The generous authors who gave up a Saturday to participate in the Book Fair were not the only ones who made it a success. Although the entire Humanities Texas staff worked on the event, Steph Bates and Julia Aguilar deserve special credit for coordinating it. Mary Margaret Farabee, founding director of the Texas Book Festival, offered thoughtful guidance and was instrumental in lining up authors. KUT radio host John Aielli enthusiastically informed his large radio audience of the event. Adding to the Book Fair’s festive atmosphere was a bountiful bake sale prepared by Lindsey Wall, along with other staff and volunteers. The neighborhood Starbucks donated three gallons of fresh coffee, while Rev. Craig Sommer of St. Martin’s Evangelical Lutheran Church graciously provided chairs for the authors and use of the church parking lot. To all of these friends and the Humanities Texas staff I extend my deep appreciation.

Prudence would have dictated waiting until the Byrne-Reed House’s restoration before hosting a large public event in the building. But the opportunity to do something tangible for the communities affected by Hurricane Ike was too compelling to pass up. In Lawrence Wright's eloquent words, "If the authors can't help get the books back in the libraries, who else can?" 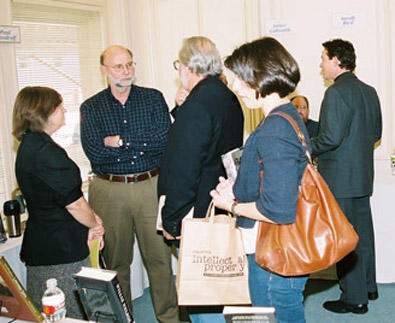 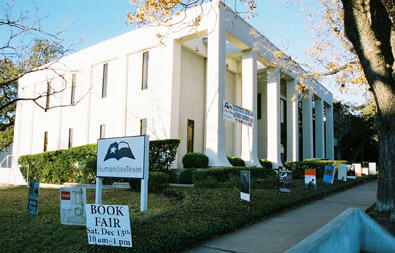 Yard signs featuring images of participating authors' books lined the yard of the Byrne-Reed House on the day of the 2008 Book Fair. Photo by Humanities Texas.