Civil rights leader and Nobel laureate Martin Luther King Jr., born on January 15, 1929, remains a towering figure today, almost forty years after his assassination on a balcony of the Lorraine Motel in Memphis. Martin Luther King Day is celebrated annually on the third Monday in January (January 21 this year), and "The Road to the Promised Land," which focuses on King and the civil rights movement, remains one of Humanities Texas's most popular traveling exhibitions.

Featuring photographs, facsimiles of landmark documents and quotations by Dr. King and others engaged in the struggle for civil rights, "The Road to the Promised Land" surveys the Civil Rights Movement from Dr. King's emergence in the Montgomery bus boycott of 1955 through the 1990s.

Created by former exhibitions director Frances Leonard, "The Road to the Promised Land" has traveled far and wide across the state of Texas as well as to Florida, Indianapolis, Kentucky, Louisiana, Missouri, North Carolina, South Carolina, Pennsylvania, Washington, and Mississippi.

Visitors to public libraries, students, corporate employees and staff at places like M.D. Anderson Cancer Center in Houston and the Tarlton Law Library at The University of Texas at Austin are just some of the thousands of people who have seen the exhibition since its creation. Jic Clubb, former exhibitions manager, singled out "The Road to the Promised Land" in remarks he made at his retirement event last year. "It’s a powerful exhibition," he said. "As that exhibition has circulated around the state, I know it has changed lives."

Humanities Texas’s three copies of "The Road to the Promised Land" tend to book early for Black History Month in February, but organizations interested in permanent copies of the exhibition can purchase unframed poster sets for $65. 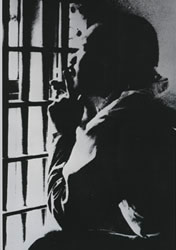 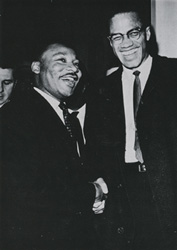