The historical profession and the nation lost one of its greatest practitioners on March 25 when Dr. John Hope Franklin died at the age of ninety-four in Durham, North Carolina. Franklin was perhaps best known for his textbook From Slavery to Freedom: A History of African Americans, first published in 1947, and subsequently revised into eight editions. I vividly recall buying a used copy of this important book as a high school student in San Francisco during the mid-1960s to learn what was called "Negro history" during a turbulent decade. The book's pages became worn and tattered from my constant reading and rereading about topics that few high schools, or colleges, for that matter, dared teach to their students. I learned for the first time the horrors of the slave trade and the middle passage, the brutalities of 250 years of American slavery, and the ingenious manner in which enslaved people managed to resist bondage, retain their cultural heritage, and maintain some semblance of family life as well as dignity as human beings. I learned, too, that the African American freedom struggle had a long history and was not simply the product of the 1960s, when African American students marched, staged sit-ins, and raised their voices collectively to demand an end to every form of racial discrimination.

Born in Rentiesville, Oklahoma in 1915, Franklin grew up in Tulsa, a prosperous western city that experienced one of the most tragic race riots in American history in 1921. Attending Fisk University in Nashville, Tennessee, provided John Hope, as Dr. Franklin was known to his friends, with a solid educational foundation, after which he earned M.A. and Ph.D. degrees from Harvard University. Never bitter—even though he could not attend the University of Oklahoma in his home state because a segregation ordinance in Norman barred blacks from living within the city limits, or when told that special arrangements had to be made at the North Carolina archives to accommodate him as he conducted research for his doctoral dissertation, because African Americans were segregated from whites in state offices—John Hope faced these challenges with the quiet dignity and proud demeanor that characterized much of his professional life.

I met Dr. Franklin during the early 1980s, when I taught at Southern Methodist University. He was a professional acquaintance that I treasured, for Franklin trained literally dozens of graduate students at the University of Chicago and Duke University, where he taught for the majority of his professional career. He took a keen interest in my scholarship and professional career, even though my research on African Americans in the West was far removed from his own work in the South. When I attended his eightieth birthday celebration (we should all be so lucky) hosted by Duke University in 1995, George Wright, today a fellow Humanities Texas Board member, invited me to sit at the head table with Dr. Franklin, Duke's president, and a host of dignitaries. It became clear on that evening, when people traveled near and far to honor this man and his achievements as a scholar, activist, and humanitarian, that his life had made a profound difference. I take pride in the fact that I and several colleagues persuaded Texas A&M to present Dr. Franklin with an honorary degree, one of more than two hundred that he received during his lifetime, and was even prouder when Texas A&M's president Ray Bowen asked me personally to present the award at the spring graduation ceremony.

Amid the profound sadness that a friend has passed on, I take comfort nonetheless in the fact that John Hope Franklin touched my life and demonstrated that historians, through their scholarship, courage, and humanity, can effect change and educate a generation of Americans to work toward building a better world.

My first personal introduction to Dr. John Hope Franklin was engineered by Dr. Benjamin Quarles at the Association for the Study of African American Life and History's annual meeting in the early 1970s in Cincinnati, Ohio. Both men by then had blazed remarkable trails as historians and "19th Century gentlemen," and were exceptionally appreciative of each other as scholars. As a graduate student, I was awed standing between the two intellectual giants at that meeting and moment in time. Over the years, I had come to think of both men as grand philosophers who placed us on the path to good scholarship and the good life. Excellence, exemplary, and irreplaceable were understatements to me as I thought about the accomplishments of both men. They had proved to be the dyad of my early schooling into the wonderment of African American history.

Whenever meeting, Franklin and Quarles always exhibited their abiding respect and affection for each other, wittily expressing this with grandeur and lofty sentiments in their one-upmanship dialogue on the scholarly importance of the other's research and writings. Franklin would observe to Quarles that the latter's recent book was extraordinary and would be the text on the subject for a long time to come! Not to be outdone, Quarles would compliment Franklin on his most recent publication, noting that there was nothing to match or surpass it in quality. Friendship aside, when they commented publicly and in print on the significance of the other's works, they did so with scholarly verve. In reviewing Franklin's monumental textbook, From Slavery to Freedom, published in 1947, Quarles wrote in an essay of 1948 that it was "synthesis at its best" and" all who turn its pages will share a common agreement that this work joins that select company of books which Bacon designated as worthy 'to be chewed and digested.'" In memorializing Quarles in the aftermath of his death in 1996, Franklin stated, "I can say categorically and without fear of contradiction that Benjamin Quarles was one of the finest, most original historians of his generation." Their bonding and encouragement for the other was vitally necessary in a nation prone to overlook excellence owing to color.

John Hope Franklin believed in an untrammeled democracy and gave unstintingly of himself to the concept and its reality as a scholar and timely activist. He knew he was following in the prodigious footsteps of Harvard-trained black historians of brilliance—W. E. B. Du Bois, Carter G. Woodson, Charles Wesley, and Rayford Logan—and that his research and writing had to meet the customary expectations of excellence and be rooted in progressive, democratic societal change.

Franklin, like Invisible Man novelist Ralph Ellison, was born in Oklahoma. He attended the all-black Fisk College for his B.A. and then Harvard University for his Ph. D. Franklin taught at many of the country's finest colleges and universities—Howard University, Brooklyn College, the University of Wisconsin, and Duke University.

Franklin's From Slavery to Freedom was a crowning achievement of his youth and still today in its 8th edition invites a reading by the layperson and scholar for the richness of the story, footnotes, and bibliography. This book was preceded in 1943 by Franklin's The Free Negro in North Carolina, 1790–1860. Franklin proved profound and prolific in adherence to a research agenda that produced many other major books—e.g., The Negro in Twentieth Century America; Racial Equality in America; The Militant South, 1800–1861; and Mirror to America: The Autobiography of John Hope Franklin.

I took special pleasure in reading the books of Franklin's latter years when he demonstrated a boldness—correctly so—in positioning himself autobiographically on the American landscape, telling us how he stumbled upon the work of George Washington Williams (who wrote what can be considered the first textbook on African Americans) and why Franklin himself undertook to complete a biography on Williams; and Franklin's writing on his father, Buck Franklin. In those works, we discover what gave rise to Franklin's determination—as he labeled it—for the "life of learning," his sense of purpose and concomitant belief that he could bring about change as a scholar. We note as well his resolve and preoccupation with poise in the face of stinging racism that sometimes stood between him and a footnote in a library or a hailed taxicab ride to get home.

Many will remember Franklin for the work he did as chair of the "Advisory Board of the President's Initiative on Race" formed by President Bill Clinton. The panel sparked controversy: the most significant from other minority groups rightly noting that their experiences and problems were not being discussed. Franklin's vast store of knowledge and experiences seemingly would have made him keenly aware of this, but it did not as his many years led him to see America primarily in terms of blacks and whites. He had missed much of the post 1980s significant scholarship on "critical race theories" despite thinking more globally and about gender. Still, however, he was suited as a recipient of "The Presidential Medal of Freedom." His scholarship and testimonials had been used to support the arguments of Thurgood Marshall and others in Brown v. Board of Education of Topeka, Kansas, and Dr. Franklin trekked with Dr. King in Selma in support of civil rights. He too embraced the song "I Ain’t Gonna Let Nobody Turn Me Around" in public marches and, simultaneously, carried on his private war against the forces that conspired to deny him the courtesies of citizenship. He accepted his debt to humanity, and no doubt suffered his share of fools owing to it! One delighted in sharing public space with Franklin because the earnest person knew the serious discussions to pursue in the search for common bonds and the building of positive relationships between individuals as well as nations.

While we lament his passing, we rejoice that he lived so long! His was a history—through the corpus of his writings and his model life—that allowed us to see beyond our noses to the broader complexities of human life and the inherent beauty and benevolence of American democracy if we addressed its challenges. Franklin ran his race swiftly in youth and with swagger in the later years—impeccable scholarship, commendable Civil Rights activism, keeper of the faith in the fulsomeness of his married life, strait-laced in the righteousness of his chosen path, mentor to many, and orchid horticulturist. In saying farewell, we hold mightily to the thought "Well done, Dr. Franklin!" 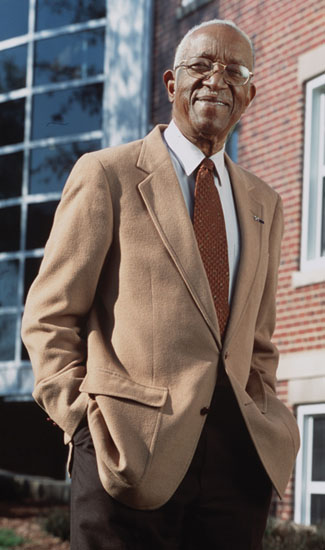 John Hope Franklin. Photo courtesy of the Library of Congress.