Join Us for a Staged Reading of The Recruiting Officer

Texas Veterans' Voices and Humanities Texas cordially invite the public to attend a staged reading of Irish playwright George Farquhar's The Recruiting Officer. The reading will be held at the Byrne-Reed House on Thursday, July 24, 2014. Audience members are encouraged to arrive at 7:00 p.m. to enjoy light refreshments before the reading begins at 7:30 p.m.

The Recruiting Officer, written in 1706, follows Captain Plume as he recruits the citizens of Shrewsbury to serve in the King's Army. Romantic escapades, comedic misunderstandings, and classic themes of love and war make Farquhar's The Recruiting Officer a crowd-pleasing exploration of a small town's response to military presence.

Isto Barton, director of the reading, says, "Farquhar builds a world in which it is easy to laugh at both the foolish recruits and the officers tricking them. The play carries the witty, bawdy criticism of the Restoration into a world that was expanding due to military force. Farquhar’s characters and writing would prove delight enough, but we also have a spectacular cast of smart actors, and a gorgeous setting for a lovely evening of laughter, ale, and conversation."

Johnny Meyer, playwright and cofounder of Veterans' Voices, explains the relevance of this play to modern audiences: "The military that we have recently deployed to Iraq, Afghanistan, and elsewhere relies on voluntary enlistment rather than conscription—in other words, soldiers must actively choose to go into the service. The urge to serve is not necessarily a particularly complex one. Patriotism and a sense of adventure are surely motivation enough for many volunteers. But are there ulterior reasons for going in? And once in the military, why do people choose to leave?

"George Farquhar, a veteran of the British military, evokes the comic aspects of army volunteers in his 1706 play The Recruiting Officer. He captures the spirit of army enlistment with more wit and humor than I have ever come across, and as one of the co-coordinators of Veterans' Voices, I felt we had to get this play in front of an audience. The Recruiting Officer is very rarely performed, and it compares well with the best work by Shakespeare, Oscar Wilde, and George Bernard Shaw."

While the event is free and open to the public, space is limited and an RSVP is required. Please email rsvp@humanitiestexas.org or call 512.440.1991 to RSVP. 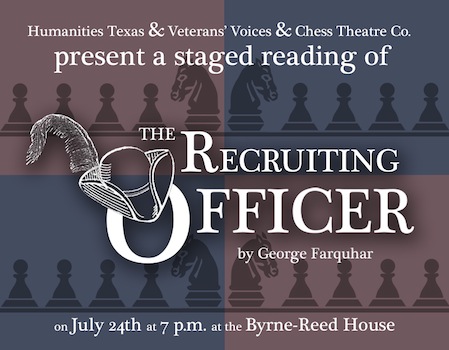