On June 19, 1865, Union General Gordon Granger arrived in Galveston and read aloud the Emancipation Proclamation, marking the beginning of freedom for the 250,000 slaves in Texas. That historic day is still remembered and celebrated as "Juneteenth." Humanities Texas board member Maceo C. Dailey Jr., the director of African American studies at The University of Texas at El Paso, wrote the following essay, entitled "Juneteenth Honors March to Freedom," on the meaning of Juneteenth for the El Paso Times.

The importance of the Juneteenth holiday celebration regionally and nationally can be best stated in language Billy Kyles used to eulogize his compañero, the Rev. Martin Luther King Jr.: "But God unfolded to me little by little, that I was there to be a witness and here I am with some degree of clarity, telling the story."

This is the inherent meaning and intended purpose of Juneteenth and the honoring of our African-American forebears.

The greatness of the story is in what our ancestors did with their God, degree of clarity, and allotted time on Earth as they moved from slavery to freedom. Their faith enabled them to survive the long nightmare of slavery and see the real meaning of freedom.

They were smart enough to temper joy with duty, as one former slave in Texas put it so eloquently in 1865: "We knew freedom was upon us, but we did not know what it would bring!" Freedom did bring pain and persecution as African Americans in the state sought to restructure their families, find work, erect places of worship, and build schools. They faced hostile judges, callous political parties and presidents, physical assaults by the Ku Klux Klan and pale face, a newspaper industry preoccupied with sensationalism, low wages, and high unemployment.

Hard work prevailed, however, and scrubbing floors and picking cotton were turned into something other than daily despair and death for them.

With one ounce of their courage today, we could correct many of the modern ills of broken families—drug consumption, teen-age pregnancies, unemployment, and the absence of hope. We stand on no quagmire when we stand on their legacy of achievements, this first generation of freed blacks in Texas.

Citizenship for black Texans back then was a matter of duty and diplomacy; culture and spirituality, for them, became matters of determination and dedication. "Journeyproud" was their coined word to describe both the anticipation and momentary hesitation of individuals about to take a much-coveted trip. The trip for them was to stay on freedom's road.

How well did they fare?

In the early 1860s as the Confederacy was about to collapse, many Southern slaveholders east of the Mississippi rushed to Texas, bringing slave property they intended to keep and hoping to establish a more powerful slaveocracy in the promising new state.

Between 1861 and 1864, the state's slave population increased from 182,566 to 250,000. The indigenous and newly arrived Texas slaves were poised for manumission when Union Gen. Gordon Granger came ashore in Galveston on June 19, 1865, and proclaimed them free.

The former slaves proved remarkably adroit in defining the essence of freedom, some to the extent of seeking to obtain land for an all-black state in East Texas, as is evident by the book Imperium in Imperio by black minister Sutton Griggs and in proposed legislation by African-American lawmakers.

Texas African Americans entered the political arena with a great measure of sophistication, offering the state the real prospect of democracy and development.

In addition to their legendary roles in state politics, one of their members, Norris Wright Cuney of Galveston, emerged as a political boss so powerful that potential Republican Party presidential candidates sought his support. Texas blacks hastened to create viable communities by establishing churches, schools, colleges, fraternities and sororities, uplift societies and clubs, hospitals, parks, and businesses—see, for example, the Houston publication of the Red Book citing such communities' political, economic, and sociocultural growth and development from Reconstruction to 1915.

With so few resources, they accomplished so much! Why is it now that with so many resources, we accomplish so little?

The answer lies in our forebears being smart enough to ask the right questions and accepting the obvious: you don't cut corners—whether on your way to church, college, or corporate America.

If we learn from them, then Juneteenth, which became a state holiday in 1979, is celebrated properly. If not, then we make a mockery of our ancestors and ourselves. For theirs was a time, to quote novelist Toni Morrison, "When black folks really loved other black folks," in those early days of Juneteenth and jubilation. 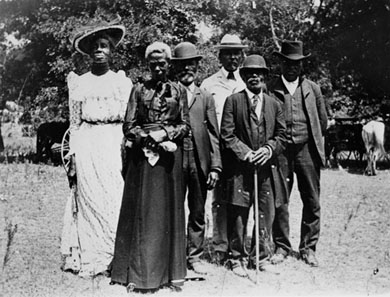