If he were still alive, President Lyndon Baines Johnson would turn 100 on August 27, 2008. Growing out of his alma mater's celebration of the centennial of his birth, an interactive exhibition titled "Remembering LBJ and His Legacy: Local Recollections—An Oral History Project" opens this month at the LBJ Museum of San Marcos. A Humanities Texas grant to Texas State University-San Marcos supported the exhibition, which is a collaboration between the school and the museum.

"We know that the president's college days in San Marcos and his one year teaching in the South Texas town of Cotulla affected him profoundly," said project director Pat Murdock, the former director of the university's news and information service. "He got his start in politics here. He learned to appreciate education."

The exhibition, which grew out of an oral history project at Texas State, will include photographs, text, and an interactive kiosk with audio clips and other materials from San Marcos residents and community leaders, university alumni, and friends of the thirty-sixth president of the United States.

"In addition to text and photographs and audio clips, we have a variety of other things," noted Murdock. "A retired administrative assistant has placed the dress she wore to LBJ's inaugural ball on loan to the museum, along with a picture of her and her husband at the ball. She was the admin in the College of Liberal Arts, which houses Texas State's Army ROTC program. She remembers very well when Lyndon Nugent was a Texas State student and how his mother Luci and grandmother Lady Bird attended Army ROTC events in which he was involved. This was a plus we didn't expect."

After a special invitational preview opening on August 23, the official public opening will be at 2 p.m. on August 24. Museum director Scott Jordan said he expects the major components of the exhibition to remain in place for most of the 2008–09 academic year.

Some of the forty-eight individuals interviewed by Texas State history graduate Barbara Thibodeaux were direct beneficiaries of the civil rights, education, and social service reforms that occurred during Johnson's days in congress and the White House. McAllen dentist Joel Martinez, a San Marcos native, was among Texas State's earliest Upward Bound participants.

San Marcos community activist Ollie Giles offered family information that provides a rare glimpse of African-American life in San Marcos from the 1940s to the 1960s, while Augustin Lucio and Celestino Mendez recalled the struggles and accomplishments of local Hispanics.

Other interviewees, like former Texas State president Bob Hardesty; Harry Middleton, the first director of the LBJ Library and Museum in Austin; and Liz Carpenter, former staff director and press secretary to First Lady Claudia Taylor (Lady Bird) Johnson, had close personal connections with President Johnson and his family, first as employees and later as friends.

Retired University of Alabama professor Bruce Roche, former director of media relations for the university, and retired Southern Illinois University professor David Conrad, a coauthor of the book LBJ: The Formative Years (1965), contributed significantly to the understanding of the impact that Johnson's student days in San Marcos had on his life and legacy.

The LBJ Museum of San Marcos opened in December 2006. The museum's mission statement notes that its "primary focus is on the years President Johnson spent as a student at what was then Southwest Texas State Teachers College and his teaching experiences in South Texas and the impact these experiences had on his leadership in the development of legislation, especially in the areas of education and civil rights."

Humanities Texas funding allowed the museum to add interactive capabilities and portable components that will enable the transport of exhibition elements to other venues such as local schools. "I don't think we can stress too much the importance of the interactive capabilities that the Humanities Texas grant has made possible for the museum," said Murdock. "This is something that will live on long after this particular exhibition is gone." 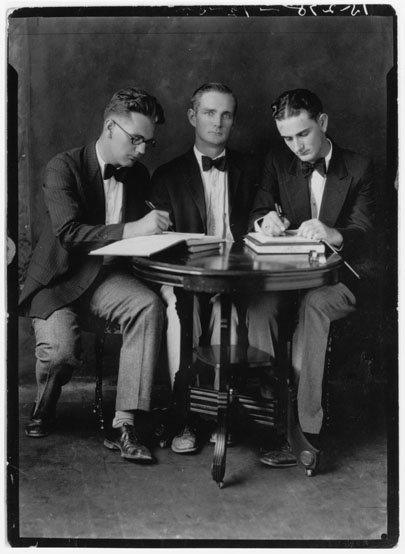 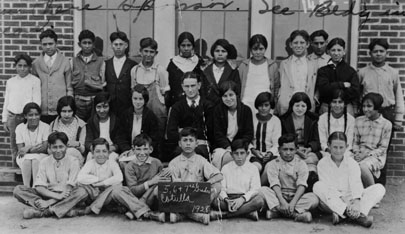 Lyndon Baines Johnson (seated, center) and his first students at the Welhausen School in Cotulla, Texas, in 1928. Photo courtesy LBJ Library and Museum. 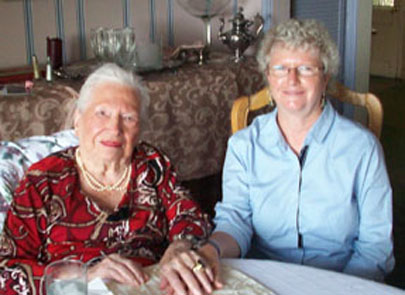 Liz Carpenter (left) was one of those interviewed by Barbara Thibodeaux. Photo courtesy LBJ Museum of San Marcos.