In March, Humanities Texas cosponsored lectures by Pulitzer Prize-winning historian David Oshinsky. Dr. Oshinsky spoke in Houston and San Antonio on the profound impact of polio on mid-twentieth century America. In June, author Hampton Sides spoke to a Fort Worth audience about Kit Carson and the Navajos.

Public lectures stimulate thoughtful dialogue about important topics. Humanities Texas, both individually and in partnership with other cultural and educational institutions, has sponsored lectures and presentations on a diverse range of topics, bringing noted scholars and other experts to audiences around the state.

In 2007, Humanities Texas cosponsored lectures by Pulitzer Prize-winning historian David Oshinsky in Houston (with The University of Texas Health Science Center at Houston) and in San Antonio (with the Center for Medical Humanities and Ethics and The University of Texas Health Science Center at San Antonio) on the profound impact of polio on mid-twentieth century America. Also in 2007, award-winning author Hampton Sides spoke on Kit Carson and the Navajos at a Fort Worth event cosponsored by the Fort Worth Public Library Foundation, Texas Christian University, and the Amon Carter Museum.

Previous lecturers have covered a range of topics, from Professor Maggie Rivas-Rodriguez, who captivated El Paso veterans and other residents with a multimedia presentation narrating World War II stories of U.S. Latinos and Latinas, to Stephen Greenblatt, distinguished author of Will in the World: How Shakespeare Became Shakespeare, who spoke to a Dallas audience about the historical and cultural fabric of Shakespeare’s life.

Communities around the state can engage one of the dozens of knowledgeable scholars listed in the Humanities Texas speakers directory. For a nominal fee, these outstanding presenters travel to communities throughout Texas to speak about the culture and history of our state, our country, and our world. Whether exploring environmental ethics in East Texas, the role of women in the Islamic world, the relationship between basketball and rhythm and blues, or the songs of Selena, Humanities Texas speakers advance civic understanding, cultural enrichment, and lifelong learning. 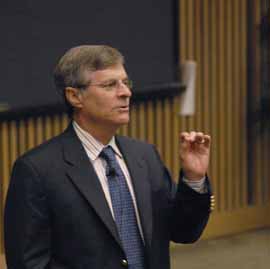