For more than seven years, the University of Houston Women's Studies Program has presented the "Living Archives," a series of panel discussions highlighting women's contributions in a wide range of professional, social, and cultural contexts.

Each "Living Archives" program brings together a panel of women who share their experiences before a live audience at Houston’s Menil Collection. Panels in recent years have explored a diverse range of topics, including women in the military, Quaker women and peace, women in politics, and mother and daughter survivors of hurricanes Katrina and Rita. Humanities scholars serve as moderators and respondents in each program.

The September 2007 program on women and the military, made possible in part with a grant from Humanities Texas, featured panelists with first-hand experience of the armed forces. Captain Tamersen Critchlow-Glenn of the U.S. Marine Corps had recently returned from a tour of duty in Iraq, and Jayne Pace flew air patrols during World War II. Betty Luman, an editor at the Houston Chronicle and former writer for Stars and Stripes, and Drs. Elizabeth Gregory and Landon Storrs of the University of Houston also participated in the program.

The discussion surveyed the evolution of women's experiences in the military from World War II to the Iraq war. Topics included U-boats in the Gulf of Mexico; the history of the WACs and the gradual expansion of women's combat and command roles; harassment of women soldiers within the ranks and programs combating mistreatment; gender and the draft; the effect of women's participation or nonparticipation in the military on their status as citizens with full rights; and quite a few others. Audience members were absorbed throughout and asked many probing questions.

The series director is Dr. Elizabeth Gregory, a professor of English and director of the Women's Studies Program at the University of Houston. "The 'Living Archives' series is a means of focusing the public on the need to document women's history, as well as on the collection at the Women's Archive and Research Center," said Dr. Gregory. "The 'Living Archives' serve to present a sense of women's lives in Houston and the changes and struggles that have characterized that history."

To ensure that the programs serve future students and researchers, each "Living Archives" program is videotaped and catalogued in the Women's Archive and Research Center at the University of Houston.

The "Living Archives" series draws a clear connection between the humanities and the everyday narratives of women, and fosters an energetic and vibrant dialogue between the participants and the audience. Humanities Texas is pleased to support this worthwhile program. 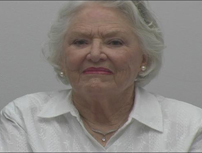 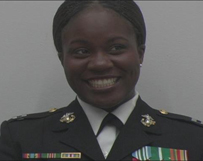 Jayne Pace (above, top) and Captain Tamersen Critchlow-Glenn (above, bottom) were among the participants in the recent "Living Archives" program sponsored by the University of Houston's Women's Studies Program. Photographs by Roberta DeFrancesca, courtesy of Women's Archive and Research Center, University of Houston.