"This is a very, very special day for me," she said. "In the classroom just a few minutes ago I said I was a softy. Today, these are tears of joy. Thank you so much, all of you for all the roles you've played in my life."

Humanities Texas, the state affiliate with National Endowment for the Humanities, selected Bridgewater as one of 12 award recipients. Though Bridgewater learned in May she was chosen, it wasn't until Thursday in the high school library that Humanities Texas Executive Director Michael L. Gillette presented the official plaque to her.

"This award is really an award for Marble Falls High School," he said.

Gillette said it takes a special school and a special district to have teachers of Bridgewater's capacity while letting them teach in a manner that prompts students to do their best. The executive director also commended the students in attendance.

"[The award] is also an honor for the students," he said. "It shows you have accepted the challenge Ms. Bridgewater has given you."

Bridgewater has always been a teacher who tried to get her students to not just tackle a subject, but jump in and immerse themselves in it.

Natalie Lewis, a student in the Humanities class, said Bridgewater doesn't suppress her love for the subject or her students.

"I think what sets her apart is she's not afraid to show her kids how much she really cares about what she's teaching," Lewis said. "She's very up front about how much she cares about her students as well. Not every teacher can do that. "

Bridgewater also opens the doors for students to fully explore issues and subjects.

"[Humanities] is the type of class where they are supposed to have experiences," the teacher said. "Where they're not just supposed to read about art, but analyze art and even create art themselves. Or not just to talk about the treble clef in music but to also listen to music. And if they play instruments or have vocals, then to sing in class. They get a chance to have hands-on experiences with what we're learning in class."

Bridgewater also gives students the chance to not only study a particular issue, but to learn where they stand on that topic.

"You don't just get to talk about things — she really encourages you to explore a subject and also dig in to yourself to see how you feel about it," Lewis said. "There are really no topics off limits."

By teaching in this manner, Bridgewater said she's not just trying to get students to learn, but also begin developing their own personal philosophy.

Patti Cryer, the district's gifted and talented director, said Bridgewater gets her students to think outside the classroom and try to apply what they are learning in their own lives.

"In her Humanities class, it's not just about reading books about philosophy," she said. "They are going to look at what makes us human. In the letter in which I recommended her for this award I wrote that Shirlene is a vessel of self-discovery for the students. And it's so true."

On an ironic note, Bridgewater, who grew up in a family of educators, did her best to shirk the teaching profession. Though she got an education degree to "fall back on" for 18 years after college, Bridgewater pursued careers in public relations and the magazine industry. She even owned a bookstore for a little while.

After a divorce Bridgewater decided she couldn't run from the "family business" of teaching any longer. Along with providing her with a job, teaching also allowed her, a single mother, a way to raise her son.

But 18 years ago when she stepped into the classroom at Kempner High School in Sugar Land, Bridgewater found more than a job or paycheck.

"The first day I walked in a classroom in Fort Bend (County) right outside of Houston was the first day of the rest of my life," she said. "It's been a true joy to be a teacher. I had a long career before teaching and that was financially rewarding. But there's not a penny of that I would take back since becoming a teacher. I love the opportunity to help students go deeper in themselves." 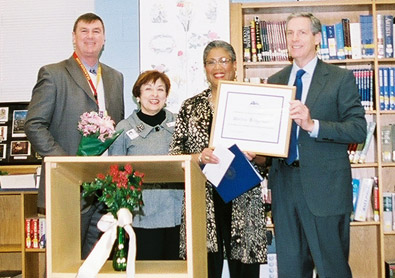