We are pleased to introduce March to Freedom, a new traveling exhibition presented in collaboration with the Dolph Briscoe Center for American History at The University of Texas at Austin and the LBJ Presidential Library.

In the 1950s and 1960s, Dr. Martin Luther King Jr., the charismatic leader of the Southern Christian Leadership Conference (SCLC), joined other civil rights leaders including James Farmer, Roy Wilkins, A. Phillip Randolph, and John Lewis to lead peaceful demonstrations and conduct nonviolent acts of civil disobedience publicizing the need for equal rights, including a national voting rights law. The media coverage of their peaceful demonstrations, which were at times met with violent opposition, helped garner widespread support necessary for the passage of voting rights legislation. The three marches opened the door for the signing of the Voting Rights Act on August 6, 1965.

In 1965, renowned photojournalist James “Spider” Martin was the youngest freelance photographer at the Birmingham News, where he covered everything from Alabama football to country club social events. Witnessing the violent treatment of peaceful protestors had a profound effect on Martin’s career. His images of Bloody Sunday, March 7, 1965, in Selma, Alabama, galvanized public opinion in support of the protesters. Martin joined the historic march from Selma to Montgomery later that month in two capacities: as a member of the media and as a participant in the struggle for racial equality.

Through Martin’s camera and the words of Congressman John Lewis, former head of the Student Nonviolent Coordinating Committee (SNCC), March to Freedom follows a determined group of marchers, both black and white, as they tried on three different occasions to take their cause to the steps of the Alabama Statehouse in Montgomery.

March to Freedom features thirty framed, black-and-white photographs and is available for rental through the Humanities Texas Traveling Exhibitions program. The exhibition debuted on February 2 at the Gregg County Historical Museum in Longview where it will be on display until March 11.

Learn more about reserving March to Freedom for your community by contacting us at exhibitions@humanitiestexas.org.

March to Freedom is an exhibition by the Dolph Briscoe Center for American History and the LBJ Presidential Library presented in partnership with Humanities Texas. Martin’s photographs from March 1965 are part of the Briscoe Center’s extensive photojournalism holdings. 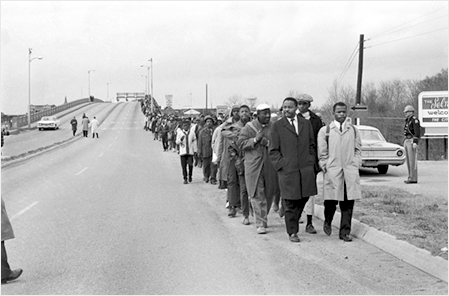 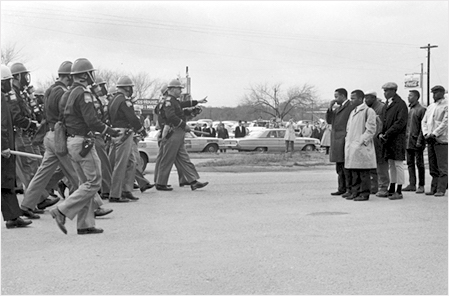