In October 2007, the Library Club of Menard, Inc., sponsored "Menard Reads . . . Together," an annual community-wide reading program that in 2007 turned its focus to immigration and the experiences of Menard citizens who serve, or have served, as migrant workers. Among the participants was children’s author Diane Gonzales Bertrand, who asked to return to Menard when she discovered that 250 children came to the library on one day to hear her books read in English and Spanish.

From the final report:

The feelings of accomplishment by library staff and others who worked on the project were overwhelming: the joy of seeing children’s reactions when a story reader speaks in their native tongue; the little boy saying, "I love the library"; and the Head Start child who hugged his very own book to his chest, saying, "My family! My family!" . . .

The books provided by the Humanities Texas grant, Crossing Over: A Mexican Family on the Migrant Trail, by Rubén Martínez, and Esperanza Rising, by Pam Muñoz Ryan, brought home the reality of immigration, illegal immigration, and migrant workers to many in our community, who have commented that the political issue now has a face. . . .

The finale of this project, the celebration of our own migrant workers from the 1930s to the present, was of professional caliber, yet immensely personal, leaving Anglo and Hispanic alike silent with awe. Photographs provided by the immigrants formed the nucleus of the presentation and opened discussion between those who had journeyed so far in search of work, and those who had not previously understood that sort of life. Elia Zapata demonstrated the contraption she wore to pick potatoes fifty years ago as a child in Utah; it had not been unrolled since she last used it, and her small gloves were still rolled inside. The Sauceda sisters shared the heartache when a young nephew fell on his machete and bled to death in a wheat field as his father tried to save him. As we learned about this important part of Menard’s history, our Anglo citizens were left with respect and appreciation, while our Hispanic citizens felt the pride that comes with inclusiveness. This event will become an annual celebration. . . .

Finally, by this mini-grant Humanities Texas has made possible a unique and important program for our community. We reached heights we did not anticipate in relation to community participation, the professionalism of the events, and the lasting rewards this project has opened up for our diverse community. . . . We could never have accomplished so much without this mini-grant from Humanities Texas.

"Menard Reads . . . Together" was supported in part by a Humanities Texas mini-grant. 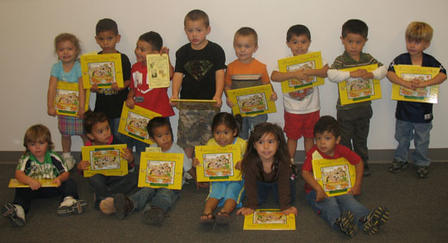 Children participating in Menard's Head Start program display the books they received as part of the "Menard Reads . . . Together" program. Photographs by Jane Vaughan. 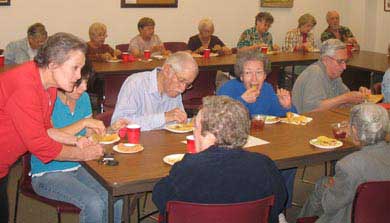